Laugh It Up at this Monthly Alternative Comedy Showcase 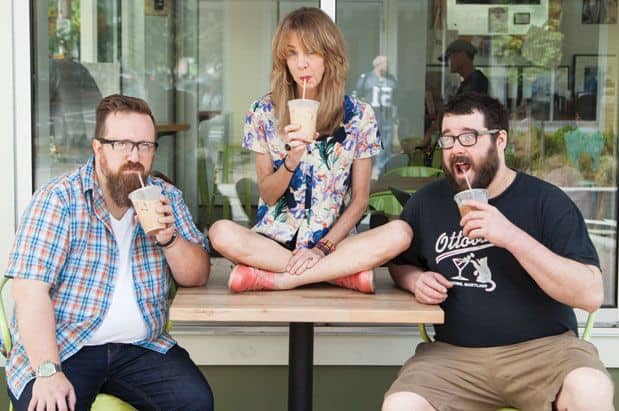 If you need a break from Seattle’s unfailing earnestness, let your irreverent side fly free at Laugh Riot, the monthly alternative comedy showcase that takes place at Capitol Hill’s Chop Suey (9/2. 9 p.m. $5. 1325 E Madison St.; Facebook, “Laugh Riot”). You’ll be in good hump-day hands the first Wednesday of every month, thanks to cohosts and funnymen-about-town Derek Sheen and Ryan Casey.

Nancy Guppy: Laugh Riot is…
Derek Sheen: A 90-minute showcase where we bring comics in from all over.
Ryan Casey: Really good comics that you wouldn’t normally see at comedy clubs.
DS: It’s a show for underdogs. Really funny underdogs.

NG: Are there any women in the lineups?
DS: Yes. We try to feature at least one or two women in every show so it’s not just a bunch of bearded white dudes.
RC: Like us.

NG: How do you make cohosting work?
DS: We are very good at listening to each other and allowing each other to have a moment to build on something.
RC: It’s a genuine friendship. We like each other and I think people can tell.

NG: What did you want to be when you were little?
DS: A comedian. For third-grade show-and-tell I did one entire side of a George Carlin album from memory.
RC: I wanted to be a filmmaker, but going to film school scared me, and also filmmaking is a lot of work. Being a comedian is just saying words into a microphone.

NG: What makes you laugh?
DS: Tragedy, like the kid who just got eaten by an alligator. The sign said, “No swimming alligators,” but it didn’t have a comma in it, so…

NG: Are there topics that are off limits, comedy-wise?
DS: You can joke about anything as long as you have a sense of empathy and you understand where the joke is.
RC: Punch up. Don’t punch down.

NG: Anything you can’t live without?
DS: Validation.
RC: Moisturizer.