A teen geek grows up to become a super graphic artist 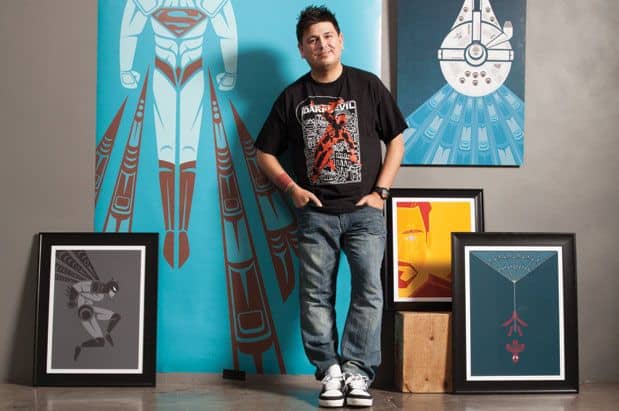 Growing up on the Port Gamble S’Klallam Reservation, Jeffrey Veregge spent a lot of time on his own, drawing and reading pulp novels and comics. The stories that spoke to him were wildly uncool to his peers. “Being a geek in the ’80s was not fun,” Veregge says.

One can imagine the reception when, for example, he came to junior high wearing Vulcan ears. “And no, it wasn’t Halloween.” Decades passed before Veregge—now a 41-year-old husband, father and graphic designer—realized that he could love his cultural self and not feel like that awkward eighth-grade kid.

He began to create artwork translating iconic comics superheroes into a Coastal Salish visual language. Some find a larger message in this mash-up, but not Veregge. “There’s no hidden meaning in it; I’m not that kind of guy,” he says. “I want to have fun.”

These days, the Bremerton-based artist’s calendar is packed with shows and conventions, and he’s working on a bevy of dream-come-true projects. He’s met and befriended some of his childhood heroes, including Tim Sale, who worked on the Batman, Superman and Spider-Man franchises. Just as these artists inspired him, he hopes to inspire young people today—especially young Native Americans. “I want them to know they can celebrate their traditions and, at the same time, hold on to that sense of fun.”

3. Veregge is creating visuals for Promised Land, a documentary (currently in post-production) about the Duwamish and Chinook tribes’ effort to be granted sovereignty by the federal government.

4. Veregge hopes to officially reveal his own comic book, with a Native American protagonist who exceeds the “long hair and traditional garb” stereotype, next spring at Emerald City Comicon (4/7–4/10, 2016; emeraldcitycomicon.com)