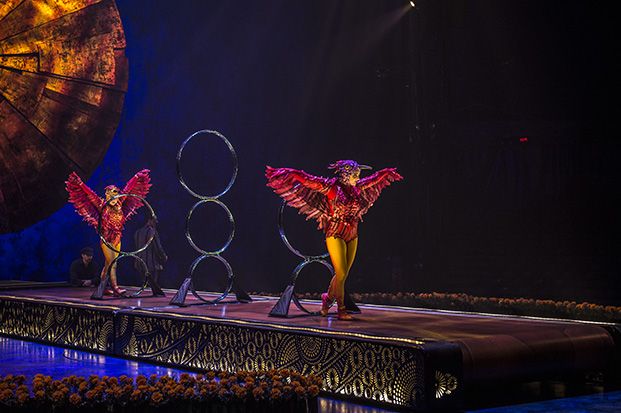 Though Ringling Brothers will close permanently this May, indeed the circus lives on. Here are three reasons to catch Cirque du Soleil’s latest production, Luzia, billed as an “acrobatic waking dream of Mexico.” The production runs through May 21st at Marymoor Park, and takes place in the company’s travelling home venue, its trademark blue and gold big top tent.

Reason One: The Cast! Any Soleil show has a tight ensemble, and Luzia’s 44 performers move fluidly among each other, from company member to soloist, in a New York minute. All are impeccable, but special mention must be made of Majo Cornejo (vocalist), Rudolf Janecek (juggler), Laura Biondo & Abou Traoré (football dancers) and Eric Fool Koller (our unofficial host of the evening). Cirque is famously cast with top tier acrobats, gymnasts and aerialists from all over the world, from Belarus to the Ukraine to China; the production’s seamless acts and scenes, brought to life by such a talented, diverse cast, raises the question of how future shows could be staffed in light of heightened U.S. travel restrictions and immigration bans. The show is a prime example of the transcendance of the arts and how very different people from all over the world can come together to create something awe-inspiring, collaborative and truly original.

Reason Two: Breathtaking Imagery A loose plot begins with Koller jumping out of plane, landing in a mysterious land, turning a key and throwing himself (and viewers) into an imaginary region filled with one breathtaking scene after another. Overall, Luzia is a tribute to Mexican culture and lore throughout the decades, including nods to the silent movie era, a modern salute to football (aka soccer), Day of the Dead celebrations, Mexican wrestling and a fiesta-inspired finale. As these scenarios unfold, contemporary circus acts play out underneath, often incorporating choreographed rainfall that functions as a character, of sorts, with a playful mind of its own, drenching performers when they (seem to) least expect it.

Reason Three: The “Wow” Factor The traditional circus may be dying, and with its well-documented mistreatment of animals, that’s probably a good thing, and all the more reason to see a human-based cirque perform breathtaking, even death-defying acts live onstage. From this perspective, Luzia delivers over and over again. Circus arts such as juggling, trapeze and hoop diving are hundreds of years of old but Cirque du Soleil always manages to inject new life into them. Perhaps that’s why they remain and continue to captivate while other more primitive circus acts fade away. Certainly there is power in the ability to turn every audience member into a five-year-old again. Even the most jaded among us may find our mouths agape, taking in the visual wonders like a cyr wheel and trapeze in the rain, or hoop diving on treadmills, only able to whisper, “Wow.”