Macklemore Really Doesn’t Like Trump, and the Internet Goes Wild

Over the weekend, Macklemore renewed his disdain for Trump at an Arizona concert. 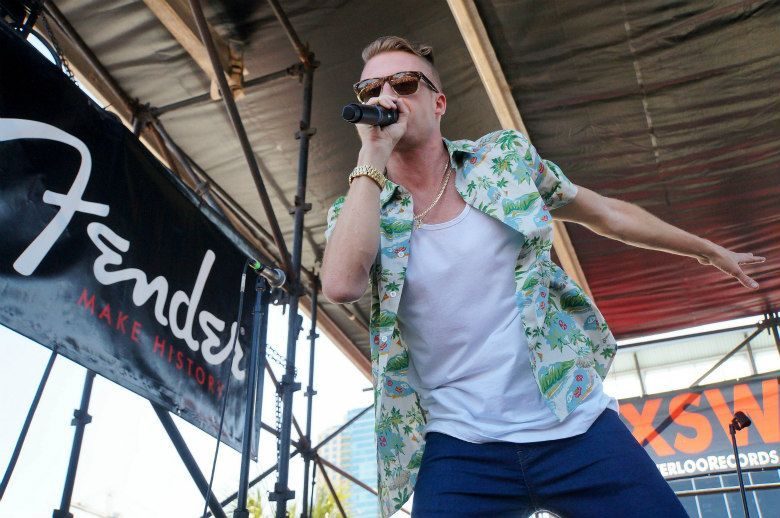 Trying to guess someone’s politics can be a dangerous game. But even the casual observer could reasonably surmise that a rapper from progressive Seattle who rose to fame with songs about marriage equality and white privilege probably didn’t check the box for Donald Trump last fall.

Stranger things, sure, and we’ll concede that Macklemore’s haircut might have thrown those unfamiliar with his music off the liberal scent. However, over the weekend the “Same Love” rapper publicly renewed his disdain for the Leader of the Free World during an Arizona concert.

On Saturday night, the emcee (and soon to be father of two) led Tempe fans in chanting “f— Donald Trump!” before performing his verse from the remix of a YG song of the same name. The song—which also features insufferable Bay Area greaser G-Eazy—is an unabashed Trump diss track, ripping everything from his hair to his attempted Muslim ban, in varying degrees of eloquence.

Sample lyric: “Your politics are like a Starburst pack; nobody f—s with the orange one.”

Always with a finger on the pulse of hip-hop culture, Fox News and other conservative blogs caught wind of Mack’s antics. One concertgoer told Fox that the millennial crowd was eating up the anti-Trump rhetoric, waving their middle fingers in unison, and cheering another speech he made about “immigration and acceptance.”

The fact that Macklemore injected a little lefty politics into a concert isn’t much of a surprise. But as Fox reports often do, the post triggered online backlash from Trump supporters, some of whom were just learning of Macklemore’s existence. Others meanwhile, responded with rap-lyric comebacks of their own.

I don’t know who @macklemore is, but I’m assuming he’s a rapper who wants the black crowd to like and accept him. How original to bash Trump

Trump shows love. You take it as hate. He says no illegals and you all act irate.

.@macklemore is a nice man. He also supports #marriageequality with #Samelove and speaks out against #alternativefacts #Trump

It was a lot of commotion considering this isn’t exactly a new opinion for Macklemore. Besides the song, which was released more than a year ago, the day after the election he expressed his supreme disappointment in a widely circulated Instagram post.

Trump’s camp has not yet responded with a diss track of their own, but as we’ve learned, anything is possible in 2017 American politics.