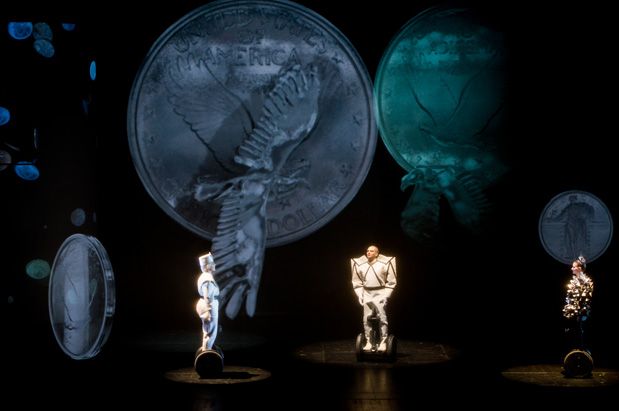 All photos by Gary Hill

The Makers is a new column on Seattlemag.com that explores different Seattle creatives and their crafts. These artists live to design, connect and create.

“I got my hands on the early Sony Portapak, purely by happenstance, and found myself deep in the cybernetic milieu of electronics—body and self—and went from there,” writes Seattle-based artist Gary Hill in response to my question about how he first started doing all that he does. His works include video art, sculpture, installations of varying shapes and sizes, and musical performance pieces, all of which usually incorporate technology in some way.

I meet him for an interview in his Belltown studio—a two-story, 3,000-square-foot basement space with high, airy ceilings. The space is in alternating states of organization. A set of bookshelves is neatly tidied, partially filled with art books and other texts, and partially filled with books that accompany some of Hill’s installation pieces, like this one. A ladder stands open on the bottom floor of the studio, facing a blank cement wall. In the upstairs office, digital mixers and other sound equipment tower upon tables on all sides of the room. Hill seats himself in a wooden chair. Behind him is a piano keyboard, more sound equipment, and higher up, another smaller keyboard.

If you haven’t heard of Hill before, you may not be alone. For such a prolific artist who has lived and worked in Seattle for 30 years and won a multitude of awards, including a MacArthur Genius Grant in 1998, Hill seems lesser known here than he should be. He tells me he once sat on a panel for contemporary art and the other panelists there didn’t seem to be aware of his work at all. He’s laughing a little while he says that, though, and seems to take it more as a characteristic of the Seattle art scene rather than a personal slight.

Hill came to Seattle in 1985 after his two artist exchange fellowships in Japan ended. His brother, who lived in Seattle at the time, sent him a classified ad for a job at Cornish College of the Arts to start a media program for the school. Hill landed the position, ran the program for about five years, and has lived in Seattle ever since. Besides the Sony Portapak, Hill’s early influences include the music of Terry Riley and La Monte Young, the New York Painting and Sculpture 1940-1970 exhibit, some LSD during his younger years, and a friend’s older brother who made complex wire sculpture (Hill himself started out mainly as a sculptor).

Now Hill works in a variety of media, often mixing sculpture with sound, written and spoken language, and video. His latest works include an installation at the historical Rossiva Cinema in Moscow and a 3D-animted variation on a Beethoven opera at the Lyon Opera House. You can see a huge list of Gary Hill’s works, including when and where they have shown here.