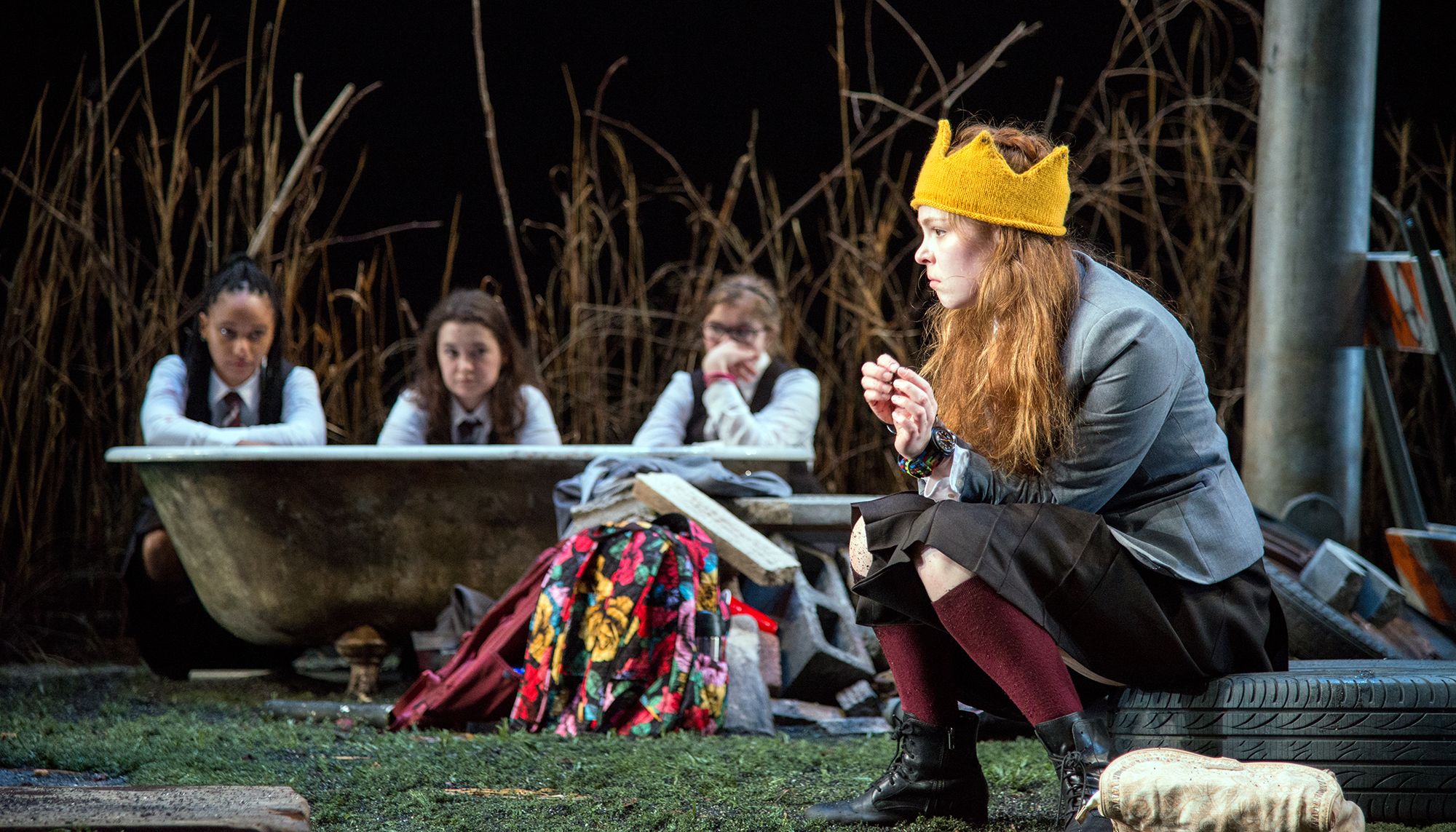 If Mean Girls were more macabre and Machiavellian, you would start to get a sense of playwright and director Erica Schmidt’s MacBeth, her adaptation of Shakespeare’s “Scottish Play,” in this original, avant-garde production currently at Seattle Rep. Her version is no less grisly in its portrayal of corruption and chaos, yet its actors—an all-female cast playing teenage girls in modern times—hint at something even more gruesome.

A black wall and tattered, overturned sofa; an old tire; a filthy bathtub and dead, dry grass set the scene (the work of set designer Catherine Cornell), reflective of the work’s grim tone and portending doom. In standard private school uniforms, the young actors are schoolgirls retelling the story of ambition gone awry. Lady Macbeth, played by local actress Izabel Mar in her Seattle Rep debut, skillfully personifies one of the most formidable female characters in the Shakespearean canon. Arguably more cunning and devious than her husband, it is she who devises the plan and sets everyone down a murderous path; she takes on Lady Macbeth’s emasculating, shrewd nature and ultimate descent into madness so skillfully that, despite her evil, it is almost disappointing to see such a strong character fall. Likewise, Macbeth herself (played by Charlotte Schweiger) portrays the role’s shift from overwrought Thane of Cawdor to hubristic King of Scotland as convincingly. A versatile supporting cast—most playing multiple roles—complete the talented young group.

For all its strengths, the piece is not perfect: If it has been a while since you’ve read the play (or if you’ve never read it at all) you may experience some confusion with all the role swapping. As for the direction, there are some corny gestures—including a scene involving baby dolls—even though they do add some levity to the play’s serious themes. The addition of a Beyoncé song during the coronation scene felt jarring and awkward, but in a way that also made sense, circling back to the idea that, after all, these are teenage girls. And in true adolescent fashion, some of the characters, dripping with the scarlet blood of the slain, take a selfie after the gory fulfilment of their bloodlust, self-absorbed social media addicts who must document every moment of their lives—even the darkest.

Beyond Schmidt’s thoroughly modern take throughout the drama, it’s this act alone that offers the play’s most chilling commentary: a train wreck of horror, that, when amplified by social media, is something from which we cannot look away. Even with women filling these roles—a wry nod to when women in Shakespeare’s time were excluded from the stage—the nature of this tragedy ends as it always has, with the darkest of human nature on full display.