In her debut column, Nancy Guppy chats up one of the city's most versatile musicians. 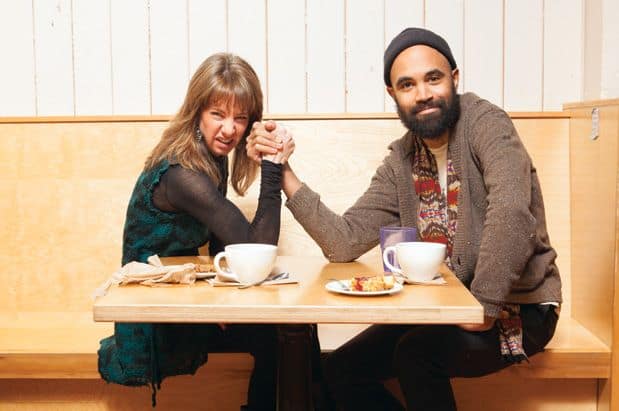 COFFEE DATE: Musician Morgan Henderson, who recently joined Seattle neo-folk rockers The Cave Singers and plays on their new album, Naomi. The band hits the Showbox at the Market this month (5/4; thecavesingers.com).
SCENE: The café at Elliott Bay Book Company, a Wednesday morning in February
MORGAN’S ORDER: A bacon, cheese and spinach omelet

Nancy Guppy: You’ve been in Seattle bands The Blood Brothers, Sharks Keep Moving, Past Lives, Fleet Foxes and now The Cave Singers.
Morgan Henderson: Yep.
NG: I’m guessing you keep moving on because the money keeps getting better.
MH: [laughs] Money hasn’t factored into it, and it was never a design to pop around to bands, but because I like a lot of different kinds of music and like to operate in different types of music, that’s sort of how it’s working out for me.
NG: Have you ever wanted to be the sexy front man? Because you could totally pull it off.
MH: Well, not necessarily, but I’ve always taken a leadership role—a “this is my band” kind of attitude. Not to the exclusion of somebody else’s wants; I just try to take it personally.
NG: Tell me something that nobody knows about you.
MH: These days I’m an addicted runner. Outside of music, that would be the thing I spend most of my energy on.
NG: Do you listen to music when you run?
MH: I can run to music without a meter. The beat is too distracting to me.
NG: Have you experienced an artistic high point?
MH: Yeah, I feel like working on The Cave Singers’ Naomi album has been a high point, because I hadn’t played electric bass since The Blood Brothers and I really missed it. When I was with the Fleet Foxes, I studied and practiced the woodwinds, so having all that information going into playing the bass felt satisfying. Artistically, it felt like a moment.
NG: Finish this sentence: “Morgan Henderson wishes he could…”
MH: I wish I could split into two, so I could have the life I’ve had and have a separate life where I went to college and studied writing and had a track career in high school and college.
NG: Wanna end this by arm wrestling?
MH: Sure. Is this how you’re gonna do all these interviews?
NG: Not if you beat me.