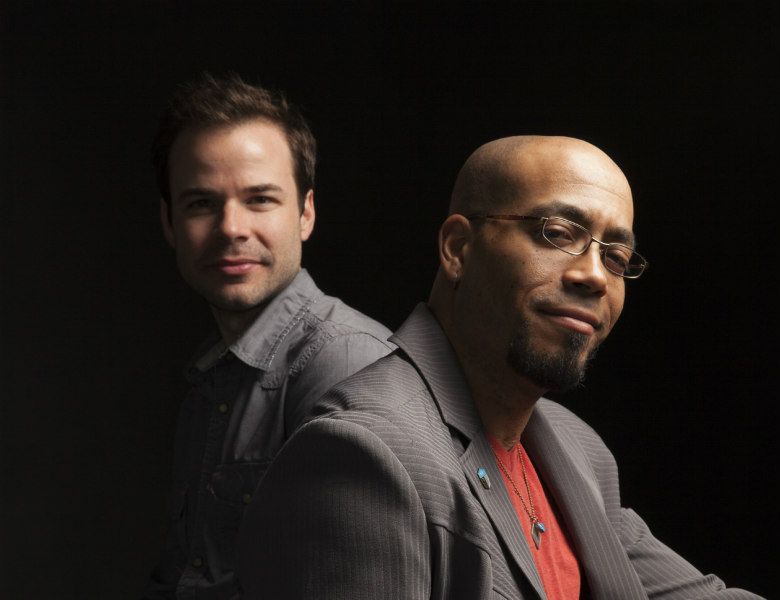 Local poet and arts educator Daemond Arrindell hadn’t even finished reading the entire 366-page novel Welcome to Braggsville last spring when he decided he was in. He’d help adapt it as a play for Book-It Repertory Theatre.

The story “felt so necessary,” he explains, adding that many of the book’s themes “seem straight from last year’s election season.”

Those themes are namely race, identity politics, the urban/rural political divide and the United States’ sordid racial history. “Our history is ugly and complex, and we’re trying to pretend that we’re totally clean as a nation,” says Arrindell, who also facilitates workshops locally and across the country about race, equity and the arts.

Written by T. Geronimo Johnson and published in 2015, the critically acclaimed Welcome to Braggsville was long-listed for the National Book Award. Its story focuses on D’aron, a white kid from teeny Braggsville, Georgia, and a first-generation college student who is feeling out of sorts at present-day University of California, Berkeley—until he meets his posse: Louis, the Malaysian-American comedian from the Bay Area who wants to be the next “Lenny Bruce Lee”; Charlie, a black football player from Chicago; and Candice, the white, blond Iowan who claims to be part Native American. (She also likes to lament ¿Por qué? ¿Por qué? whenever she’s distraught.) One day, D’aron’s friends discover Braggsville still holds Civil War reenactments, and the group decides to protest by dressing up as slaves staging a lynching.

And that’s when their so-called “performative intervention” or “theater of the real” goes horribly awry.

Seriously loaded in subject matter, the book is nonetheless wickedly funny, mercilessly skewering everyone—liberals, college activists, rural Southerners, academia—with prose that is packed with contemporary cultural references. The book’s plot makes for a compelling story, which is what Book-It—a theater group that translates literary work into theater productions—always looks for when deciding what it will produce. It’s also a story “this country needs right now,” says Josh Aaseng, the theater’s literary manager, who invited Arrindell to help him adapt the novel into a play.

It would have been irresponsible to not reach out to an artist of color to translate the novel for the stage, says Aaseng. “A black man wrote this book, so there’s this lens I don’t have,” says Aaseng, who is white. “But most important, Daemond is a performance poet, and the language of the book is so dense and so poetic with these long run-on sentences. There’s a rhythm to it.”

“It has almost like a jazz flow,” says Arrindell. The writing also reminded him of Junot Díaz’s work (The Brief Wondrous Life of Oscar Wao, which won the Pulitzer Prize), which Arrindell greatly admires.

Arrindell, 42, grew up in Queens, New York, with family roots in the Caribbean. He’s widely respected in the Seattle arts community as an educator and creative force, a former crisis hotline counselor who first made his mark locally as a poet at open mics. He’s worked with many young writers as part of Arts Corps’ Youth Speaks poetry program and as a writer in residence for Seattle Arts and Lectures. For years, he’s also worked with incarcerated teens and adults as a teaching artist with Freehold Theatre’s Engaged Theatre program, during which he compiled inmates’ work into a stage production. That work—pulling together a script—helped prepare him for this project, a first for him.

The book includes passages devoted to D’aron’s internal monologues, his doubts and his thoughts. Arrindell turned these into “found poems” for a new Poet character he created that will be included in Book-It’s production.

To help craft the script, Arrindell and Aaseng spent a week visiting Atlanta and its environs last summer. They went looking for places like the fictional Braggsville, with its Confederate flags.  They saw just one flag, Arrindell remembers; Aaseng recalls seeing two.

No one called him the N-word, says Arrindell, upending his expectations. What Arrindell loves about Braggsville, he says, is how it marshals you to check your own beliefs. Welcome to Braggsville spares no one and shows us how even the most highly educated progressive folk—white, brown, black—can be ignorant when it comes to race.