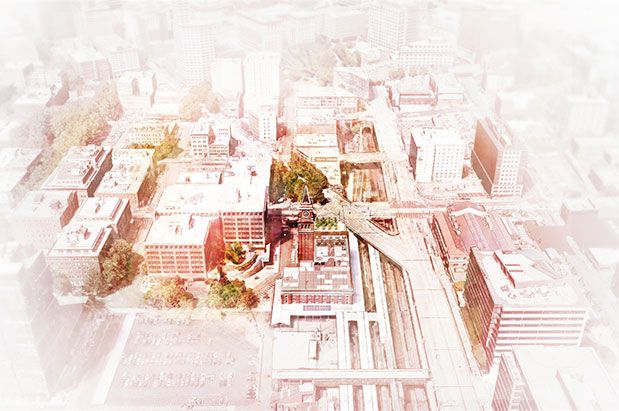 They’re already superstars, by more than just our standards. The full-service design firm Olson Kundig—known for its clean and modern style seen on everything from local landmarks like the new Thompson Hotel to distinctive destinations like Mazama’s Rolling Huts—has not only just made our recent Seattle’s Hall of Fame list, but also just announced its role in a major project underway on the 3rd floor at the historic King Street Station.
Commissioned by the Office of Arts & Culture (ARTS), the OK-designed space began in May in what’s been called a “unique collaboration between the Office of Arts & Culture, the Seattle Department of Transportation, and the Office of Economic Development” as a “dynamic space for arts and culture in the heart of the city.” The 17,130 square-foot space will serve as a permanent cultural hub for the city, offering modular public areas, arts presentation spaces, community gathering and performance spaces and ARTS offices.

We asked Olson Kundig’s principal and owner Kirsten R. Murray a few questions to learn more about the new gathering place and firm’s role in the project.

Seattle Magazine: Give us a little bit of your background: how did you come to work in your particular field?

Kirsten R. Murray: Inspired by the landscape and the “Seattle buzz,” I moved here from Colorado in 1989 to practice architecture following graduate school in Virginia, and joined the firm (then twelve people) shortly after as an intern architect. Twenty-eight years later, I am one of five owner/principals at Olson Kundig.

One of my first projects in the office was to help design the permanent exhibit galleries for Seattle Art Museum as it moved from Volunteer Park to downtown. I am currently involved with various museum projects, including expansions to the Tacoma Art Museum and the Kirkland Museum of Fine & Decorative Arts in Denver. I also enjoy designing creative workplaces for companies such as Oculus and Gawker Media, as well as nonprofits like Casey Family Programs. In recent years, the adaptive reuse and transformation of existing buildings―both historic and contemporary―has become a real interest as well.

SM: How did Olson Kundig get involved with this project?

KRM: Ever since Jim Olson founded the firm fifty years ago, art and arts-related design have been at the heart of our practice. We encourage and support our staff in cultural, board and nonprofit engagement. For instance, I am a board member at the Henry. My colleague Jerry Garcia, a principal in the firm (and Project Manager for this project), has been deeply engaged with the local art community, and with the Office of Arts and Culture previously as an Arts Commissioner. When we heard about the project we were happy to lend our expertise to the study of this potential space.

SM: What are you most excited about as it moves forward?

KRM: Several things excite me about the project. I have been in Pioneer Square since the late ’80s, and have seen art ebb and flow in the district. From 2012 to 2014, I co-curated our firm’s experimental art space [storefront] Olson Kundig in response to the gallery and retail vacancies in the aftermath of the recession. In a way, this project continues the long legacy of creative “found” arts spaces in this district, which is otherwise rapidly transforming. The introduction of a long-term public and cultural hub in the beautifully restored King Street Station will be a real benefit to the city. SM: How did the community focus groups you consulted with give you a vision of what the third floor hub could become?

KRM: From the start, the Office of Arts & Culture has prioritized community outreach in its planning. The public sessions have given us all a broader understanding of the needs of the community, and interesting ideas for how to co-locate exhibition, rehearsal and practice, arts business and social gathering uses in the space while providing a new home for the Offices staff. I think the team really heard some great ideas, and those have been key in shaping the program and design approach for the project.

SM: How will your design create a permanent cultural hub for the city? How will it serve community needs?

KRM: The uses and programming are going to be the real anchors of the space. We have located the entry to the space on floor two—the mezzanine —and a renovated original stair structure will lead you into a “living room,” which will be able to support many potential uses of the space, as well as be a place to drop in and work with various other program partners. The offices will be immediately adjacent and will provide a conference room and kitchen that can be used by the public, as well as the resources of the staff in an open work area. The rest of the space will be really flexible for art exhibition, as well as practice and rehearsal space that can be accessed from the exhibit area. We hope the space will have enough support and amenity to make it useful but also be versatile enough to allow for really unpredictable and transformative uses of the space. I think the synergy of uses, including the offices, will really make the space dynamic and social.

SM: How will the project preserve the building’s historical structure?

KRM: Firstly, the space itself is a real hidden gem. The first time I remember being in it, I had this sense that I had discovered one of the most secret places in the city. The size of the volume, its roughness and expressive structure have so much of their own character, we knew that we wanted to be careful to maintain as much of the experience as possible. Meanwhile, we have been designing new “inserted” elements that elevate the usefulness of the space for higher levels of use, and experience (such as movable art walls, a multi-use desk/counter, and a rehearsal studio). We hope to use the existing structure―both original and that added in the retrofit of the station―as armatures for other lighter and more temporary insertions, like art walls, screens and other installations. We’re in the middle of finalizing the design now and are looking at many variables.

SM: How do you think this project will enhance the city’s art community?

KRM: I think this space will really be a fertile place for different people from various programs to connect in a more public and accessible way, and in a space that will be memorable. Having the stewardship of the staff in the space will really add support to the programs that might use it. SM: Women have long been known as the nurturers and builders of community. For such a community-oriented commission, and one factoring in feedback from a number of diverse community groups, how, if at all, has your perspective as a female architect contributed to your vision for the project?

KRM: I do identify as an architect that has a deep interest in supporting community building through design. My experiences as a mother and parent have made me a better user and designer of public space as well. However, I think this project has really been the outcome of many voices, from an incredibly diverse group of people (in all ways). If anything, I think this is one of those projects where we learn so much from the client group, who in this case has really understood how to access and serve their constituency, what questions to ask, and how to listen, that it’s been a sort of master class in community building.