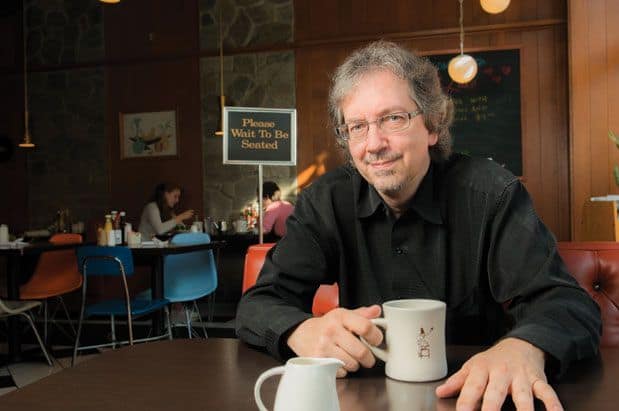 This article originally appeared in the November 2013 issue of Seattle Magazine.

!–paging_filter–pAs “Psychic Bob” on Seattle’s long-running sketch comedy show emAlmost Live/em (which ran 1984–1999), cast member Bob Nelson played an ersatz prognosticator who could make only the most obvious predictions (“In 1998, Hooters will continue to attract a mostly male clientele”). As an announcer in a sketch about the Low-key Baseball Network (“For people who like to watch baseball, but perhaps they don’t care for all that noise”), he became catatonic when describing home runs. “I always played low-key people or dumb guys,” Nelson says. brbrBut now, in what is perhaps the apotheosis of against-type triumphs, the humble, unassuming, super-nice Whidbey Island resident has become a successful writer in the shark tank of Hollywood. Nelson, 57, a href=”http://www.youtube.com/watch?v=YvW_DmfKfSk” target=”_blank”wrote the script for the much-anticipated movie /aema href=”http://www.youtube.com/watch?v=YvW_DmfKfSk” target=”_blank”Nebraska/a /em(opening November 22), directed by Alexander Payne (emSideways /emand emThe Descendants/em). Chosen as the opening film for the Vancouver Film Festival in September, Nebraska has been gathering buzz since its premiere at Cannes, where it garnered a 10-minute standing ovation, as well as a Best Actor award for its star, Bruce Dern. brbrNelson was born in South Dakota, but his parents both grew up Nebraska, so it seems only fitting that he would choose that state as the setting of his story about a son’s desire to get to know his father. The movie tells the story of Woody Grant (Dern), a former mechanic who is suffering possibly from dementia and most certainly from the effects of alcoholism, as he sets out from his home in Billings, Montana, to walk to Lincoln, Nebraska, convinced by a piece of junk mail that he is “already a winner” in a million-dollar sweepstakes. He doesn’t get far before he’s picked up by the police, after which his son David (Will Forte ofem Saturday Night Live/em) agrees to drive him to Lincoln. With a dead-end job and nothing better to do, David hopes to show his dad the folly of his enterprise.brbrNelson says he didn’t want to make a typical father-son buddy movie. “I tried to figure out how to elevate the idea,” he says. While the movie doesn’t recapitulate his exact relationship with his father,nbsp; who was a functional alcoholic, art does imitate life to some degree. “Nebraska is more of a poem to my father, a way to honor him and others who have gone through war (and by extension, other tribulations) and come back wounded in ways we can’t see,” he says. “People have to figure out how to deal with loved ones who have addictions every day, I’m making a plea in the movie for as much compassion and understanding as possible.”brbrTen years ago, Nelson showed his script for Nebraska to Julie Thompson, a Los Angeles producer who was in town to work on The Eyes of Nye (the Bill Nye show for which Nelson was a performer and writer). She showed it to her colleague, Ron Yerxa, who had coproduced Alexander Payne’s Election. Yerxa showed the script to Payne, who is from Omaha, and asked if he knew any young directors from the Midwest who might be willing to cut their teeth on a really good low-budget movie, which typically costs about $2 million to make. According to Nelson, Payne said, “How about if I direct it, and how about if we do it for a little more than $2 million?” (Final price tag: about $13 million.)brbr“Alexander Payne likes bittersweet stories that reflect both the joys and sorrows of real life and real people,” Nelson says. “And he loves Nebraska. The producers liked the characters, and they liked that Woody has a clear-cut goal that propels the story, and in a more subtle way, so does David. It is character-driven, but there is a real purpose to their journey.”brbrNot every script that is optioned makes it to the big screen, and 10 years is a long time to wait. During that time, Nelson was a writer for Comedy Central and Fox television, and continued writing screenplays, rewriting over and over until they are as terse and poignant as the script for Nebraska. “When I tell film students I go through my scripts at least 50 times after the first draft, I see many sad faces,” he says. One of his scripts, an adaption of the French film emIntimate Strangers/em, is in development at Paramount, and he’s working with Chris Rock on an adaptation of the French film La première étoile.brbrNelson says his years spent writing short sketch pieces proved beneficial to his screenwriting. “I’d been trained by the brevity of sketch to be lean and economical in the writing,” he says. “Working in sketch also gave me some clue as to whether the humor would work.” brbrWhen he was first getting the hang of it, Nelson learned by reading other people’s scripts—one of which happened to be Payne’s Election. Back then, he never dreamed that one day he’d be working with the director. “For me to think that Alexander Payne would be the one to direct Nebraska would have been pretty delusional.”/p