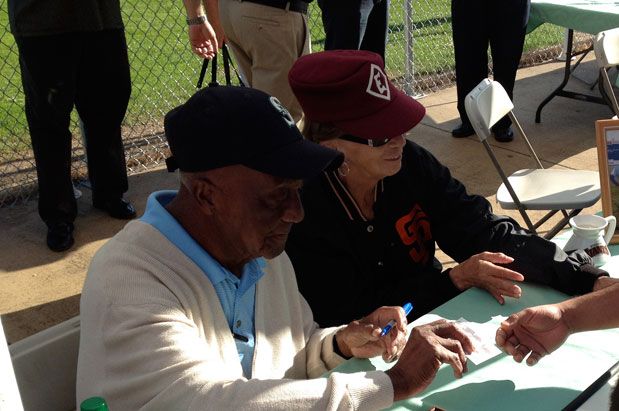 I’ve known Herb Simpson for several years now, but in general whenever I’ve seen him, it’s been at his house in the Algiers section of his hometown New Orleans. (He bought that house about 60 years ago soon after returning from World War II, and has lived in it ever since.) So I’ve never really had a chance to see him in action.

The man will be 94 this month. He’s the last living member of the 1946 Seattle Steelheads, part of the short-lived and ill-fated West Coast Negro Baseball League. That’s quite a distinction. It’s a distinction that might lead one to assume that Mr. Simpson doesn’t get around much anymore.

But what I learned last week, when Herb, his nephew Felton Glapion and I visited Seattle for the Mariners’ annual African-American Heritage Day on July 27, is that he’s remarkably spry. Case in point: Simpson doesn’t use an assistive device to walk or get from place to place. He doesn’t need the help of friends of family. On our way back to New Orleans this past Monday, Herb traversed most of Sea-Tac airport, including enduring a train shuttle ride and being hassled for a half-hour at the security checkpoint, with not only physical stamina, but also an unbelievable amount of patience and aplomb. On Friday, July 25, our first full day in Seattle, this was Herb’s schedule:

• 6:45-8 p.m.: Reception in his honor at the Northwest African American Museum.

(And, mind you, this was after getting to bed after midnight, the previous night after his five-hour flight.)

The next night, he threw out the first pitch at the Everett AquaSox game. He was able to hurl the ball well enough that it only bounced once before landing in the catcher’s mitt.

Why in the world would these trip organizers and hosts create such a packed schedule for a nonagenarian? What were they thinking? Herb Simpson is no ordinary 94-year-old man. Herb Simpson got two hits off of the greatest pitcher in history, Satchel Paige. Herb Simpson spent three years on the battlefields in Europe during WWII. Herb Simpson played professional baseball until he was almost 40.

In short, he has been there. He’s lived an incredible life, he has no intentions of slowing down too much, and I think the organizers of our trip to Seattle last week knew that.

And, I can easily say, after knowing him for three years and living 10 minutes away from him for the last two and a half years, just about every single person down here in NOLA feels the same way. Actually, so does every person who meets him.

Read Part I of our Herb Simpson series here.

Ryan Whirty is a freelance writer based in New Orleans who specializes in sports history and, in particular, the Negro leagues. He holds two degrees in journalism from Indiana University with a master’s concentration in African-American studies. He is a regular contributor to Baseball America magazine, and he has written for ESPN.com, The Hockey News, and several newspapers and magazines.