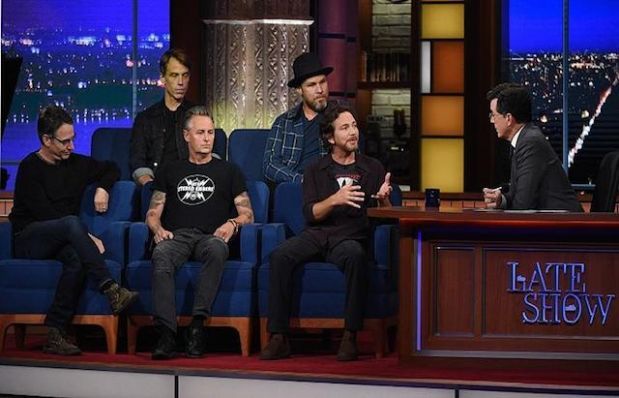 Pearl Jam played the The Late Show with Stephen Colbert show last night and lead guitarist, Mike McCready, was spotted wearing the band t-shirt of local power-pop group, Stereo Embers. Later that night, McCready tweeted this picture out of himself and Colbert backstage. The band played a Neil Young cover, “Rockin In The Free World,” with the talk show host hamming it up.

Stereo Embers, who have a record release show Friday night at the Sunset Tavern in Ballard, are one of the bands McCready recently  signed to his new vinyl-only record label, HockeyTalkter Records. It’s a feather in the cap for the local band and both a savvy and kind move by the world famous rocker.

To check out more from Stereo Embers, watch their cover of Led Zeppelin here: