Take in the main event if you can afford it—the $35 and up art extravaganza taking place this weekend at Century Link Event Center—or check out these equally exciting (and free!) satellite happenings 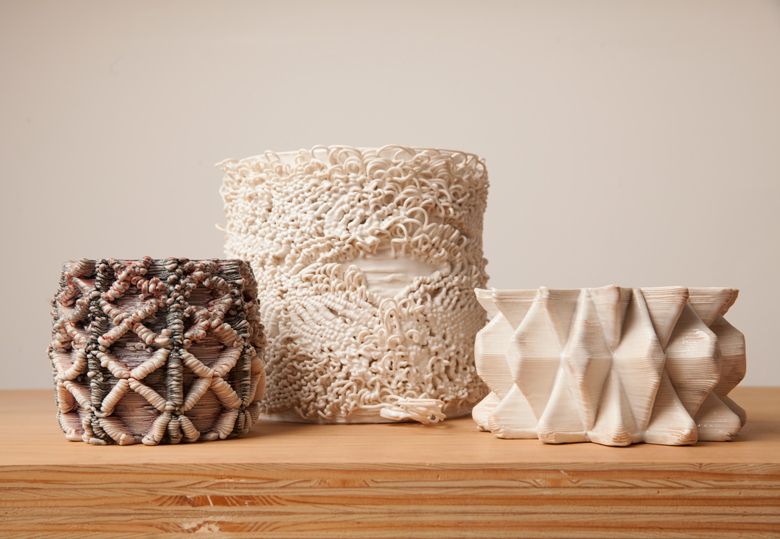 One of the best things about the Seattle Art Fair (August 2–5) is all the accompanying activity it inspires—a full weekend of art offerings in conjunction with, in response to, or maybe even in criticism of the main event. While popular, less expensive alternatives-to-the-big-fair-fairs such as Out of Sight won’t be taking place this year, take note of our roundup of other—free—events going on outside the Clink Event Center. While you’re at it, don’t miss tomorrow’s Pioneer Square First Thursday Art Walk, featuring artists such as Timea Tihanyi, whose 3D printed pottery is highlighted in our August issue.

Another outdoor projected film bears a trenchant message: You Are on Indigenous Land by artist/activist Tracy Rector, to be screened at dusk each night, Aug. 2-5, on the southwest exterior wall of the Inscape Arts building, 815 Seattle Blvd. S., inscapearts.org

studio e gallery will offer “a cornucopia of paintings and works on paper” by more than 40 established and emerging Pacific Northwest artists (represented by Greg Kucera, Linda Hodges, G. Gibson, and several other top-of-the-line Seattle galleries) in the street-level storefront space in the new Avalara Hawk Tower, 255 S. King St. The space is open starting at noon Aug, 3–5, with an opening reception at 4:30 p.m. Thurs., Aug. 2

When the site for Capitol Hill’s Chophouse Row was being excavated, the remains of a 19th-century pioneer homestead were discovered—and now SHED Architecture & Design has built an art installation in the courtyard above that spot that echoes that bygone domicile. The unveiling of Ghost Cabin will be celebrated all day with music and a chainsaw-carving demo, hosted by The Cloud Room and City Arts. Chophouse Row, 1424 11th Ave., 2–9 p.m. Sat., Aug. 4

To try to understand just how immense the solar system is, check out Chris Burden’s Scale Model of the Solar System (1983), which is just what it says it is. A 13-inch model of the sun will be set up in New York gallery Gagosian’s booth at the Fair, and Mercury, Venus and Earth, proportionately sized, will also be visible there—they’re close enough to the sun. To see Pluto, though, you’ll have to travel all the way out to the Seattle Art Museum where Burden’s sculpture of that planet will be set. You’ll find Jupiter at the Pro Shop at Century Link Field, Saturn at the Provident Building, Uranus at the London Plane and Neptune at Diva Dollz in Pioneer Square. Find them quick—this piece will be on display only during the Fair, Aug. 2–5

At Piranha Shop, another pop-up exhibition, Vice & Virtue, co-organized by Treason Gallery and the Hong Kong/L.A.-based Avenue des Arts, will show the work of national and international artists from both galleries (including locals such as Duffyleg of Electric Coffin), along with others making their Seattle debut. That’ll run August 3–5 with an opening reception 7 p.m. on Friday. 1022 1st Ave. S.; treasongallery.com/viceandvirtue