We catch up with Jason McCue, an inventive singer/songwriter and winner of the 2017 MoPop Sound Off! underage battle of the bands 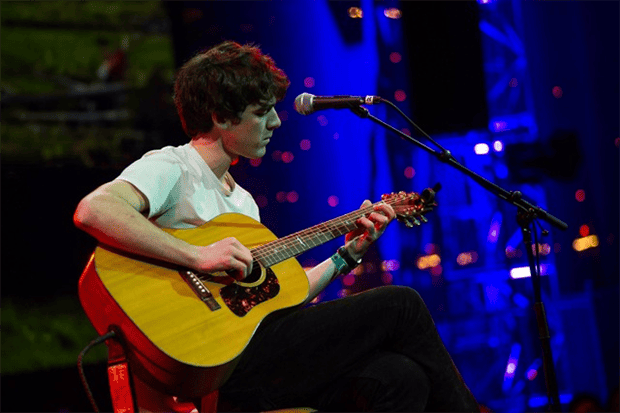 Jason McCue isn’t your average musician. With just an acoustic guitar and his haunting voice, the 20-year-old took home first place at this year’s Sound Off!, a 21-and-under battle of the bands, hosted by Seattle’s Museum of Popular Culture. While it’s difficult to fit his inventive music into a genre, he calls it alternative folk. (Check it out below, and look for his new album Obscure, out on April 28th.)

We caught up with McCue, an environmental studies major at Seattle University, after his Sound Off! win and were delighted by his humility and offbeat sense of humor.

Seattle magazine: Tell us a little bit about yourself.

Jason McCue: My astrological sign is Taurus, and my favorite food is a tie between French toast and bananas, but I enjoy combining those forces. I’m originally from the Philadelphia area, but I moved out west about a year and a half ago, and I immediately fell in love with Seattle. I don’t have any pets, but I’d love to have a turtle named Wheels.

SM: What has it been like as an aspiring musician in Seattle?

JM: It can be extremely frustrating sometimes, especially since I’m still underage. About half the commercial music spaces in the city see that I’m 20, and have to say no. And when they do say yes, getting people to pay attention to me in a bar is tough. The solution a lot of the time is DIY concerts in a house or a basement, but this poses complications since a lot of people are questioning the safety of DIY spaces after what happened in Oakland. That being said, I absolutely love how supportive Seattle musicians can be to each other. It’s incredible to feel like I’m contributing to a music scene as well-renowned as Seattle’s.

SM: Were you surprised by your Sound Off! win?

JM: My experience has been nothing short of amazing, and I still can’t believe the way things shook out in the end. I was totally surprised; I thought Falon Sierra, The Good Weird and Torpoise all gave outstanding performances that deserved to win. I guess I got it because I was different from what people expected me to be. I think people saw a dude with an acoustic guitar, and thought I’d sing love songs about a girl in a coffee shop or something. Instead they got songs about monkeys, gentrification and Satanist daughters.

SM: What do you want new listeners to know about you before they listen to your music?

JM: I’d like them to know that I’m just a dude with a guitar and a laptop in my bedroom who is trying to have some fun and tell a story. The only reason I’m doing any of this is to have fun. And a little bit to try to impress my friends. And maybe to meet Macklemore.

SM: What’s next for you?

JM: I’m playing at Bumbershoot and Timber! Festivals this summer! I still can’t even fathom that, it’s absolutely incredible that I get to play at these two festivals. Also, I have a new album called Obscure out on April 28th (wooohoooo!!!). Other than that, I’m going to finish an English final paper, eat some spaghetti, play FIFA with my roommate Connor and eventually go to sleep.