“Rebel Rebel” at SAM to Run Through December 13 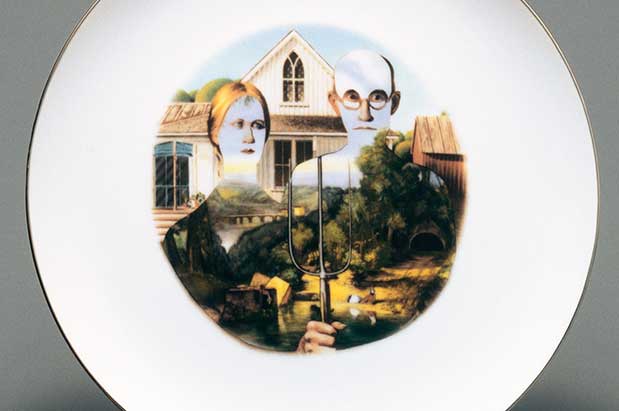 This season, amid the frenzy of downtown Seattle, where shoppers descend and office workers close out the fiscal year, there is an exhibit that disrupts our notions about artists and museums while affirming our faith in generosity and inclusion. Rebel Rebel, at the Seattle Art Museum (SAM), appears at first to be a modest show of local artists, most of them women. But the story behind the exhibition is one of the more inspiring and unusual in recent memory.

Matthew Offenbacher is a Seattle painter who holds a unique place in the city’s increasingly vibrant art scene. Most who know him were not entirely surprised in May when he and partner Jennifer Nemhauser, an associate biology professor at the University of Washington, announced what they called “Deed of Gift.” The couple had used the bulk of the proceeds from Offenbacher’s 2013 Neddy Award in Painting, presented by Cornish College of the Arts—$25,000—for the purchase of seven works by seven local artists to donate to the Seattle Art Museum.

Rebel, put together by Catharina Manchanda, SAM’s curator of modern and contemporary art, is the exhibit that showcases and celebrates this gift.The seed of “Deed of Gift” was planted in 2012, when SAM was scheduled to host the touring Elles: Women Artists from the Centre Pompidou, Paris show.

The museum had decided to mount a companion exhibition of works from its own collection, but found its representation of 20th-century female artists decidedly thin. Within the local art community, a discussion began about SAM’s holdings and its priorities. After Offenbacher received the Neddy Award the following year, he and Nemhauser saw an opportunity to make a difference. They approached SAM’s astonished curators, offering to donate works that would be selected from a list of 50 by local, living women and LGBTQ artists.

Working closely with Manchanda and other curatorial staff, they selected the seven works in Rebel. This bold yet low-key show, which also includes notable works from SAM’s permanent collection by Mary Beth Edelson, Rosemarie Trockel, legendary University of Washington art professor Howard Kottler and others, presents an alternative art history, where the wit, irony and passion of women and LGBTQ artists subvert the familiar canon. Offenbacher says of “Deed of Gift” and the resulting exhibition, “I am interested in finding constructive, positive positions at often difficult intersections of individuals, communities and institutions. Artist Andrea Fraser, a pioneer of this sort of work (which historically has been called ‘Institutional Critique’), has observed that our art institutions are formed inside everyone who believes in the authority of those institutions. This really resonates with me.”

He notes that in past projects, he’s taken on multiple roles: publisher, writer, organizational director, curator, dealer, teacher. “The Neddy Award made it possible for Jennifer and me to temporarily become collectors and museum patrons,” Offenbacher says. “In doing this, we had a chance to grapple with larger questions and make an institution we value stronger.” “Deed of Gift” is as much about creating a discussion about museums, collectors and artists as it is about expanding and diversifying the museum’s collection, as Manchanda’s Rebel demonstrates.

The story of Rebel begins with Ann Leda Shapiro’s “Two Sides of Self,” a painting that was part of the artist’s long-forgotten 1973 solo show at the Whitney Museum of American Art in New York. The small watercolor depicts two hermaphrodite mermaids, eyes locked together with female breasts and male genitalia in close contact. Shortly after the opening, the work was deemed too obscene for the institution, and the show was taken down. Shapiro continued to paint, but would do so far from her native New York, moving to Vashon Island. Returning this piece to the walls of a museum, alongside Shapiro’s accompanying “Woman Landing on Man in the Moon,” (both purchased through “Deed”) provides the exhibit with its narrative arc.

The other works donated by Offenbacher and Nemhauser in Rebel include Klara Glosova’s “Life on the Sidelines,” a large watercolor painting of parent spectators waiting for a soccer game in a wintry field; Wynne Greenwood’s video “Young Woman Warrior Prepared for Battle,” in which the subject (Greenwood herself) haphazardly covers herself in paint and gold leaf; and Joey Veltkamp’s “A-side: Glacier, B-side: Glacier National Park (Pendleton Park Series),” a quilt of patterned fabric layered with associations upon a familiar wool blanket. Also included is a pamphlet by Anne Focke, titled “A Pragmatic Response to Real Circumstances.”

But Rebel also reminds museumgoers that historical change in society and the arts remains slow. “So Good It Could Have Been,” a piece by artists Victoria Haven and Dawn Cerny (collaborating as Daft Kuntz), reframes the text of an overheard comment by a male colleague at the opening of Haven’s 2012 SAM show, who ended the statement with “made by a man.” It is a sobering reminder that there is still much work to be done.

In September, the museum hosted an evening for the “Deed of Gift” artists and their friends in the gallery, during which several of them spoke about their contributions to the show. They talked about the significance of the event, and the seeming unlikelihood of gazing at their work and that of their fellow artists on the walls of the city’s major art museum. Veltkamp, describing the event, says, “There was a surprising amount of emotion as folks talked about the origin stories of their work,” Veltkamp says. “Hearing Dawn explain how she and Vic’s [Haven] piece entered this world can’t help but break your heart. It felt very cathartic to get to tell these stories to our peers.”