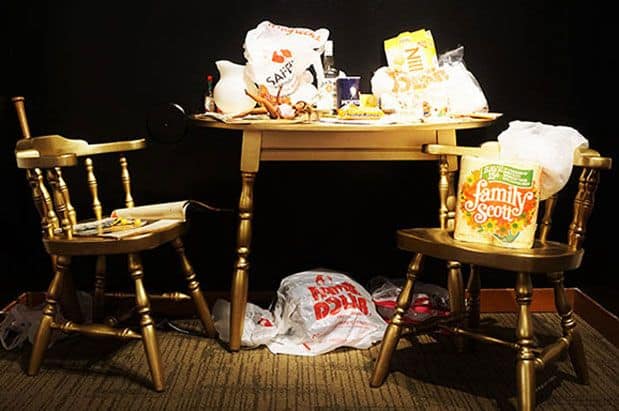 Upon entering the Northwest African-American Museum, I am greeted by echoes of laughter and banter about banana pudding and instantly I feel as if I have traveled to Seattle artist Tariqa Waters’ childhood home in Richmond, Virginia. But I am nowhere near Virginia. I am inside the Seattle-based artist, educator and gallerist’s latest show, 100% Kanekalon: The Untold Story of the Marginalized Matriarch. I step in front of a table placed directly past the doors to Waters’ exhibit, and feel at ease – comfortable — like home.

That was the goal, Waters says. And despite the warmth of comedic, loud voices recorded on a loop, the table is littered with beauty products, Dollar Store bags, child support paperwork and black Barbie – realities of Waters’ childhood.

100% Kanekalon, which features large photographs, handmade church hats and synthetic hair packs as well as an installation, illustrates Waters’ experiences growing up with little means and explores the often overlooked aspects of black culture and identity. Waters grew up in the Washington D.C./Richmond area, where her family lived in poor, working-class neighborhoods, and often struggled to get by. The artist hoped to explore a narrative that honors the secrets of the women who raised her in the exhibit, which runs through October 16.

The ideas for 100% Kanekalon, a name that references the phrase “100% black,” which began circulating in the 1980s and ’90s, festered in Waters’ mind for almost a year, she says.

“It’s just funny as hell because no one is 100% anything,” she says. In hopes of a humorous and relevant title, she paired the label with the item Kanekalon, a synthetic hair extension product commonly used by African-American women. Many people aren’t familiar with the product, but for Waters, it was everyday, popular beauty salon merchandise.

The exhibit features larger-than-life replicas of the hair packs, in a variety of vibrant colors.Other pieces in the collection pay homage to Waters’ grandmother, who reluctantly donated a few of her best spring church hats for the exhibit.

“Come Sunday it was like a fashion show – she has two closets full of hats,” Waters says. “And she would get home from church and put on sweatpants, still in all of her makeup, and have a beer in one hand, a bible in the other – cussing and reading scripture at the same time.” 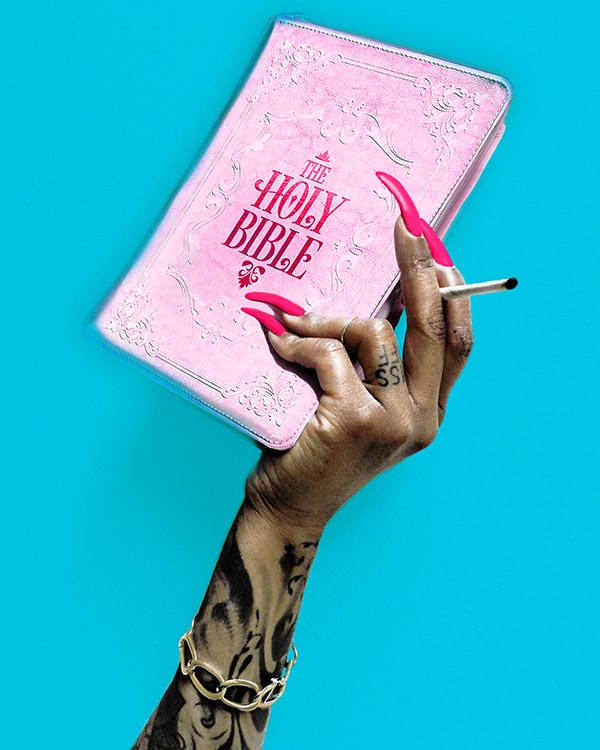 Waters says the superficiality – the hours on end of preparation, the constant need to look good — appeared in other facets of her childhood as well, within being a girl or a woman, namely a mother. Regardless of the constant whirlwind of raising children, especially in a single-parent household, a mother is expected to present herself in a put-together manner – nails done and hair tight. Her mother spent every Saturday morning grooming and preparing her daughters’ hair for the week, a production that typically took about four hours.

Waters says she still doesn’t know how her mother pulled it all together. Before she developed the show, the artist made a trip back to Richmond for the first time in 10 years, to gain a bit more insight on her identity, and come to terms with the decisions her mother had to make as a single parent. After having children of her own, and enduring child support battles herself, Waters says she finds interest in seeing how cycles repeat themselves.

She adds, “But within that, the strength and grace and dignity you have to hold down, there is some masculinity.”

Although Waters says she never experienced the presence of a strong, male figure in her childhood, her uncle played a significant role in her upbringing. He taught her how to apply eye makeup, and other quirks typically associated with femininity.

“I wanted to pull from that, even though he would kick my ass, and he’s not a matriarch in any way,” the artist says. “I didn’t see him as this masculine father figure, but it kind of rounded out that thing [that was missing] I couldn’t explain as a kid.”

Now a five-year resident of Seattle with her family (husband Ryan, 11-year-old daughter Kaelau and 14-year-old son 9), Waters feels Seattle’s arts community promotes a safe, comfortable environment. But, she says that certain perspectives are lost due to lack of discussion – she chalks it up to differences in the way that issues are talked about.

“I feel the love though, and I always have,” she says. “Seattle is like my extended family, and like family they get on my damn nerves. But I can talk to anybody here – its home.”

The exhibit runs through October 16 at the Northwest African-American Museum.