Saving the Showbox Just Took a Big Step Forward, But What’s Next?

A Seattle City Council vote could happen as early as Monday. We take an in depth look at how this is all happening, the possible domino effect of proposed legislation and what this might mean for the music venue's future 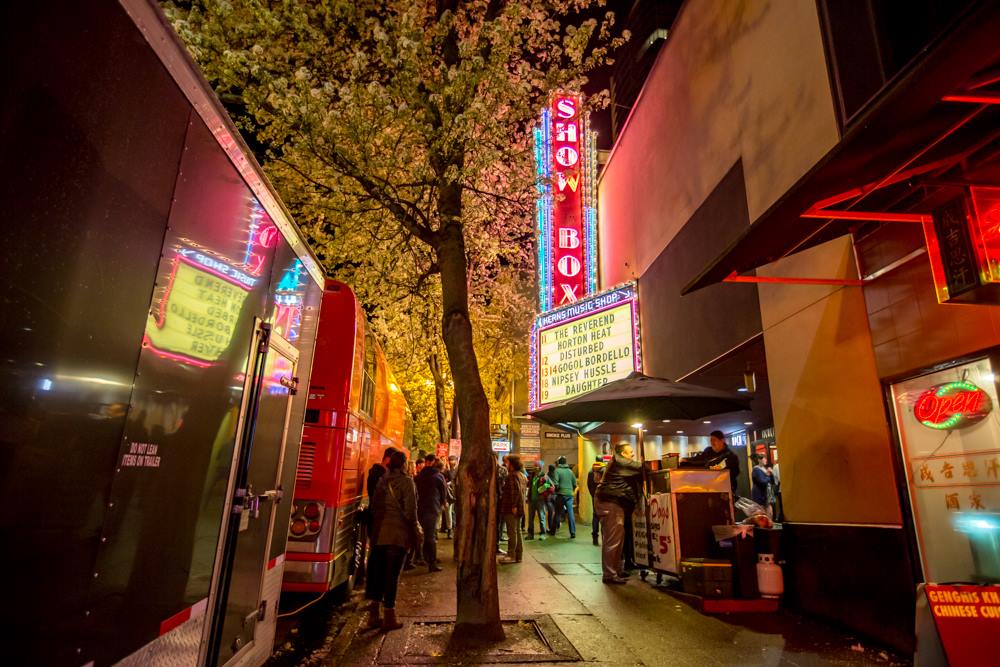 Efforts to “save the Showbox” theater moved forward Wednesday, though not in quite the way council member Kshama Sawant envisioned when she proposed legislation on Monday to expand the Pike Place Market Historical District on a two-year “interim” basis to include more than a dozen buildings on the east side of First Avenue, including the Showbox.

On Wednesday, council members Teresa Mosqueda, Lisa Herbold, and Sally Bagshaw whittled down Sawant’s legislation to expand the historic district to encompass just one new property—the Showbox—and for just ten months, rather than two years. The amended legislation passed the committee unanimously, and could go before the full council on Monday.

The council got its first look at the plan to “Save the Showbox” by expanding the Market on Monday when Sawant introduced a proposal to increase the size of the Pike Place Market Historical District to include all the properties on the east side of First Avenue downtown between Virginia and Union Streets—the largest expansion in the history of the district, which was expanded twice in the 1980s.

Sawant said the council needed to pass her proposal quickly—just one week after it was introduced—in order to halt Vancouver, B.C.-based developer Onni from building a 44-story apartment tower on the site.

By Monday afternoon, dozens of Showbox supporters had mobilized at city hall, waving signs (distributed by Sawant’s staff) that read “Save the Showbox” and “Music for People, not Profits for Onni Group” and testifying about the importance of preserving the historic venue, which first opened as a dance hall in 1939. Since then, it has served as a bingo hall, a party room, an adult “amusement arcade,” a storage facility, and a heralded live music venue with a rich history.

Supporters’ comments focused on the Showbox’s value as a music venue, but the legislation Sawant proposed would have had implications far beyond the Showbox property, rendering brand-new buildings like the Thompson Hotel on First and Stewart as well as vacant parking lots, a 1985 condo tower, and the Deja Vu strip club “historic” by virtue of their inclusion in the historical district.

Buildings in the district, which was established in 1971 to protect small farmers, artisans, and retail businesses that were threatened by plans to bulldoze the Market, are subject to a long list of restrictions that regulate everything from which tenants are allowed to the color of first-floor interior walls to the wattage of exterior lighting and signage. (More on what the new strictures would have meant for the buildings on the east side of First Avenue here.)

Sawant said it was urgent to rush her proposal through in just one week, without the usual process that a large expansion of a historic district would ordinarily require, because Onni was scheduled to vest the project “in about three weeks’ time,” which would make it subject only to current land use laws, which allow it to build an apartment building on First Avenue.

“I’m convinced that there’s a reason to rush,” Sawant said Monday. “I don’t think we should be misleading community members into thinking they have the time” to “save the Showbox” in a more deliberate way, she added. Historic designation would give “breathing room to the community and prevent Onni’s luxury project from becoming a fait accompli.”

Things moved quickly from there. Sawant’s office sent out emails calling on her supporters to “pack city hall” before a Wednesday meeting of the city council’s finance and neighborhoods committee to “force the Council to listen to our movement’s demands.” By Wednesday afternoon, when the committee met, city council members Teresa Mosqueda and Sally Bagshaw had countered with amendments to Sawant’s proposal that would reduce the size of the historical district expansion area to eliminate everything but only the Showbox property and reduce the amount of time the new controls would be in place from two years to ten months.

This amended legislation passed out of Bagshaw’s committee unanimously on Wednesday and headed to full council, where it could be heard on Monday.

On Wednesday, the timeline to pass the legislation was officially moved more than two months into the future, when Nathan Torgelson, director of the Seattle Department of Construction and Inspections, told council members that Onni will not submit its application for early design guidance, a necessary step in the approval process, until October 17, meaning the absolute earliest the project could vest is October 18.

That gives the council some breathing room to come up with some kind of agreement to preserve the Showbox as a music venue in a number of ways: 1) by permanently expanding the historic district to include the building, 2) by landmarking the building and arranging for a nonprofit to purchase and run it—possibly, as council member Lisa Herbold suggested, as part of the city’s existing historic theater district, or 3) by coming up with a compromise in which Onni agrees to reopen the Showbox in a new space on the ground floor of its new development, preserving any significant interior features of the current concert hall.

This proposed new expansion of the Pike Place Market Historic District to include the Showbox would give the Pike Place Market Historical Commission broad authority over both the physical building and its use, down to the choice of food and beverage vendors and any interior alterations or improvements. “If someone is selling bags in the market and they want to sell shoes instead, the commission reviews that,” Heather McAuliffe, the city’s coordinator for the historic district, told the council committee Wednesday.

Landmarking the building, in contrast, would preserve just the structure, without dictating how it could be used. Late on Wednesday, the Seattle Times reported that three historic preservation groups— Historic Seattle, Vanishing Seattle and Friends of Historic Belltown—had filed an application to landmark the venue, potentially circumventing a parallel application from Onni. The developer announced plans to seek landmark status for the building shortly after announcing plans to replace it with a 44-story apartment tower last month—a fairly routine practice for developers that want to expedite approval of their permits—but apparently had not yet filed its application with the city.

The third option—save the Showbox, demolish the building—would likely present the fewest legal issues for the city.

Landmarking the architecturally unremarkable two-story building where the Showbox is located or expanding the Pike Place Market Historical District to include the Showbox would amount to a selective downzone in a part of town where the city just adopted new zoning guidelines designed to encourage more housing construction. Barring Onni from building its apartment tower would also mean foregoing the approximately $5 million the developer would be required to contribute to affordable housing under those new guidelines.

That would likely lead to a protracted legal battle involving the property owner, Roger Forbes, who also owns Deja Vu, and Onni, who could argue that taking away the value represented by 44 stories of development potential amounts to a taking of private property. A compromise that would allow the Showbox to stay on First Avenue but does not restrict the owner’s ability to sell to Onni or Onni’s ability to build apartments could circumvent that potential legal dispute.

Building a new tower on top of the Showbox itself likely isn’t an option. The building, which is made of unreinforced masonry and covers basically the entire property on which it sits, would have to undergo a massive seismic upgrade to support a 44-story tower, if such an upgrade is even possible. Developer Kevin Daniels did a less significant seismic upgrade to preserve the now 111-year-old First United Methodist Church building on Fifth and Marion, which did not involve placing a building on top of the church, and that cost an estimated $40 million.

Of course, no historic district or landmark designation can force the Showbox to remain the Showbox. Forbes, the owner, could decide to sell the building. AEG Live, the subsidiary of Los Angeles-based Anschutz Entertainment Group that operates the Showbox, could decide not to renew its lease, which expires in 2021. Forbes could also decline to renew AEG’s lease.

Neither Forbes nor AEG responded to requests for comment.

If the building became an official part of the Market, the market historical commission could stipulate that it had to remain a music venue in perpetuity—and the building’s owners could fail to find a suitable tenant. There are many scenarios, in other words, in which the Showbox might close even after a successful effort to “save” it.

It was unclear after Wednesday’s vote whether the council would vote on the Showbox legislation on Monday, as Sawant originally proposed, or wait a few weeks to let discussions with Onni play out.

Council member Mike O’Brien, who initially supported Sawant’s proposal to move quickly because he believed the council only had three weeks to act, said he now believes “it would be prudent” to look at other models for saving the Showbox before going with the plan Sawant proposed. Council member Lorena Gonzalez, meanwhile, said that whatever happens, she plans to draft a resolution “that lays out in clearer form what we expect to occur over the next nine to 12 months.”

The Showbox isn’t “saved” just yet. But it might have just bought some time, and gained a few new routes to salvation.

Erica C. Barnett is a regular contributor at Seattle magazine.