Seattle Artifacts: The Spotify of its Day 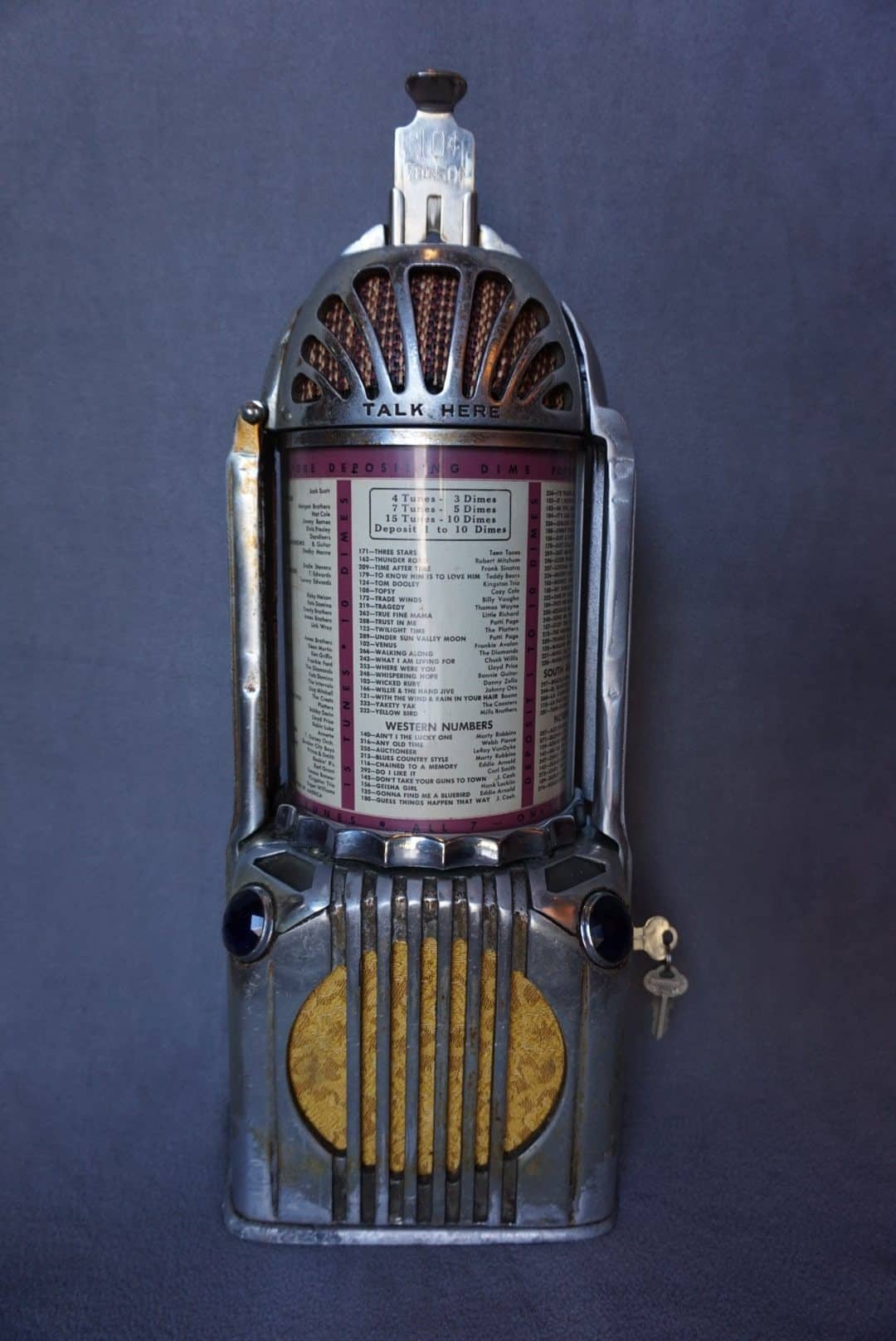 Deep in the heart of Seattle’s Georgetown neighborhood sits a turn-of-the-century brick building that was originally used as horse stables for a nearby racetrack. Its restored interior now serves as a museum of sorts, with an eclectic mishmash of antique coin-operated machines, vintage signs and old Seattle memorabilia.

The curator of this unique collection is John Bennett, who owns several other historic buildings in the area as well as the nearby Luna Park Cafe. Bennett is a veteran collector, and one of the true gems inside his Georgetown repository is a stockpile of eye-catching tabletop jukeboxes known as Multiphones, which had the distinction of being the first machines to play on-demand streaming music here in the Northwest. These beautiful Art Deco devices were, in essence, the Spotify of their day.

The story of the Multiphone begins here in Seattle, when a man by the name of Ken Shyvers established the city’s first pinball and jukebox enterprise in 1934.  Known as the Shyvers Coin Automatic Machine Co., the business provided various coin-operated machines to local taverns, diners and penny arcades. At the time, jukeboxes were only capable of holding 20 records or so and had to be changed out on a regular basis in order to offer whatever the current hit songs were.

Shyvers saw all of this as problematic, which inspired him to create a technological solution. Wanting to expand the playlist of these early jukeboxes, as well as seeking to eliminate the constant restocking that was required, Shyvers developed a device named the Multiphone, which would revolutionize how Puget Sound residents listened to their music for the next two decades.

Many of the Multiphone models sit about 18 inches tall and have a stunning Art Deco design that recalls early New York architecture. They would be placed on tables and countertops at various eating and drinking establishments throughout the region, and operated similar to a regular jukebox where customers wishing to listen to music dropped a nickel down the coin chute and made their song choice.

Unlike traditional jukeboxes, however, Multiphones were connected to two different phone lines — hence its name — which allowed customers to speak with a live phone operator in order to make specific song requests. The requested song would then be played, much to the customer’s delight, over the Multiphone’s speaker.

The phone operators for these Multiphones, also known as hostesses, were all located in a central music station and were each equipped with a turntable and access to a large inventory of records. These stations were located in Seattle, Tacoma and Bremerton and were staffed entirely by women. After customers dropped their coin into the slot, the voice of the hostess would come over the speaker and ask, “What number, please?”

Customers then consulted the printed song menu located at the base of the Multiphone and made their request. The record would then be carefully loaded on the turntable and the music played over the customers’ speakers through a dedicated phone line. Interestingly, the location for the Seattle station was in the Belltown neighborhood and many decades later served as the original cafe for the popular live music venue, The Crocodile.

Thanks to the ensuing popularity of the Multiphone, this unique job provided employment for many women throughout Puget Sound. However, due to safety concerns, the hostesses never used their real names. Rather, they had special aliases, or “microphone names,” which protected their identities.

Also, Shyvers was careful to keep the exact locations of these stations a secret. The Seattle station, for instance, ran 24 hours per day and was staffed by up to nine hostesses at a time, with many of the song requests happening late at night and coming from nearby taverns. Therefore, personal safety was always a top concern.

With such a unique two-way design interface and the ability to play individually selected music, Multiphones became immensely popular here in the local region. Throughout much of the 1940s, they could be found at more than 120 local establishments. By the mid-1950s, however, changes in technology, such as the introduction of new “high fidelity” jukeboxes, as well as licensing disagreements that Shyvers was having with the city government, spelled the end of the Multiphone. By 1959, Shyvers pulled all remaining Multiphones off the market.

A few decades later, the charm and ingenuity of these long-forgotten devices were rediscovered and they have since become highly sought after by collectors everywhere. John Bennett is inarguably the leading authority on Multiphones and can be credited with their revival. In the 1980s, he purchased a huge cache of them from a Seattle jukebox distributor where they had been sitting around, untouched, for many years.

Bennett worked hard to market and sell his new inventory of Multiphones, eventually leading to their popularization amongst various collecting communities.  He even wrote a book about their history, appropriately titled, “The Shyvers Multiphone Story.”

As a fellow collector of local artifacts, it was a true honor and privilege to stand amongst this treasure trove of restored Multiphones while listening to Bennett share stories about them. They are beautiful relics from Seattle’s past, and one can easily imagine the thrill that local residents must have had while listening to the region’s first streaming music service.

Brad Holden is an amateur historian and is the author of two books: “Seattle Prohibition: Bootleggers, Rumrunners and Graft in the Queen City,” and “Alfred M. Hubbard: Inventor, Bootlegger and Psychedelic Pioneer.” Check out his Instagram page @seattle_artifacts for more interesting tidbits about Seattle’s history.