Seattle Band HalloQueen to Rock Out on October 31

Local band HalloQueen brings Freddie Mercury back from the dead 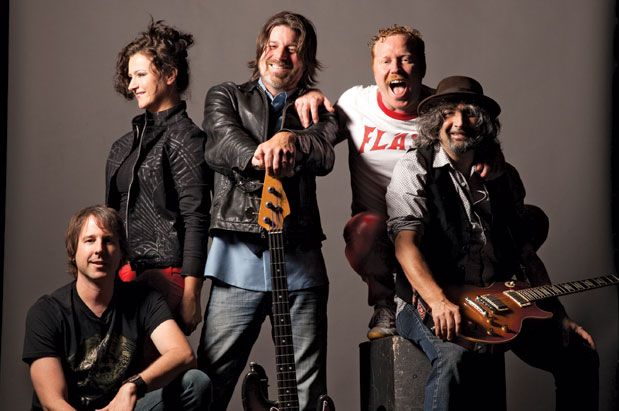 “When you’re brothers, it’s like you have a secret language,” says Chris Friel, 44, who plays drums in the band HalloQueen with his brother Rick, 47, who plays bass. “We know when to tell each other to shut up.” And when to pump it up—something else that runs in the blood. Sons of legendary local charity auctioneers Dick and Sharon Friel, the brothers have been playing in bands together since the 1970s, when, as teenagers, they started the band Shadow with future Pearl Jam guitarist Mike McCready. The Friels went on to play in bands including Goodness, Sweet Water and The Rockfords, and now do special performances as HalloQueen, a Queen tribute band. The idea came during a late-night road trip spent listening to Queen album The Game. “There’s such an incredible energy and quality to Queen’s music,” Chris says. He and Rick hooked up with singer Sean Bates and guitarist “Rock Tim” Dijulio, and at a 2001 Halloween show, HalloQueen was born. (Backup singer Nikol Fiala joined in 2004.) Since then, the band has played sold-out shows at local hot spots (Tractor Tavern, Sunset Tavern, Crocodile Café). This Halloween, it’ll play its biggest venue yet: Showbox at the Market. “The thing about Queen,” Rick says, “is that it brings people together. You look out at the crowd and see every stripe of the rainbow—straight, gay, transgender—everybody’s laughing, singing, having a great time.”

1/ Chris Friel says it took HalloQueen about 10 years of playing together to nail the sound—a combination of staying faithful to the originals and making songs their own.

3/ Before shows, Rick Friel advises the band to amp up the energy and snap audiences out of the typically low-key Seattle music vibe.