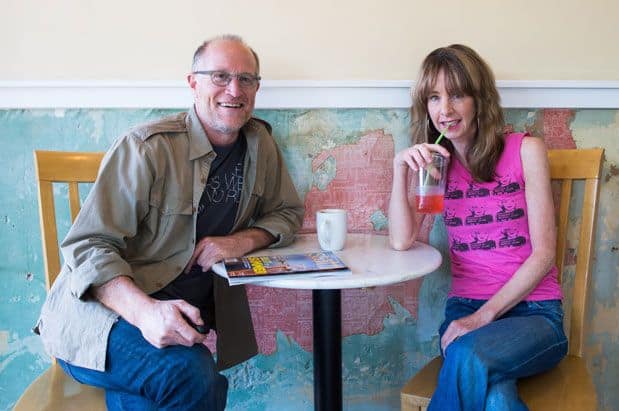 Seattle photographer Ernie Sapiro has a remarkable ability to capture the essence of local dancers, athletes and musicians—the last of which have been his special focus over the past two years. In his new solo show, Musician: A Portrait Project (coproduced by Nancy Guppy), Sapiro exhibits revealing portraits of a diverse range of local musicians, including Mike McCready, Overton Berry, Rachel Flotard, Trimpin and Star Anna. See it at the newly remodeled Union Stables building (8/27–9/11; 2200 Western Ave., just north of Pike Place Market).

Nancy Guppy: Give me the elevator pitch for Musician.
Ernie Sapiro: It’s a photographic collage of Northwest-based musicians, producers, engineers, photographers and writers—people who make Seattle a musical mecca.

NG: Why did you decide to take this on?
ES: Because I played music in Seattle for over a decade and still consider myself a musician. Because I’m more comfortable with artists and musicians than anybody else. And because very few musicians are able to make a living playing music, but their passion, talent and dedication deserve to be recognized.

NG: How did you choose the musicians for the project?
ES: They had to be based in the Northwest, they had to make original music and their music had to have been released to the public.

NG: Did the subjects have any say in the chosen photos?
ES: No, because people can’t be objective about a picture of themselves. A lot of them asked, though.

NG: Your father [Scotty Sapiro] was a renowned photographer—did he influence you?
ES: I didn’t pick up a camera and get serious about photography until after he died. But I grew up hanging out in his studios, and he always let me look through the viewfinder, so I got a sense of composition and eye.

NG: Who were you in high school?
ES: An outcast. My friends and I were borderline troublemakers. We didn’t get arrested, but we should have.

NG: Would you rather be filthy rich or creatively satisfied?
ES: Creatively rich.

This article was updated on August 19 to reflect the date change (August 27) of the show.