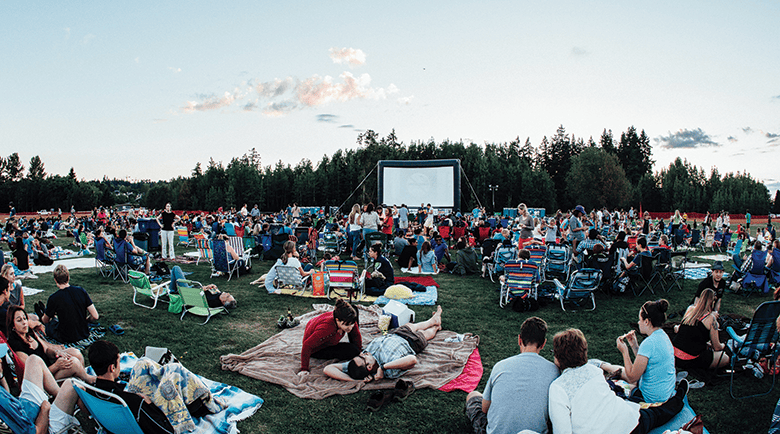 Make the most of late summer nights by catching an outdoor movie on a Saturday in July or August at Seattle Center’s Mural Amphitheatre, after you grab a bite to eat at the nearby Armory. Or, if a beer garden and food trucks are more your style, check out the outdoor movies at South Lake Union’s Discovery Center. Come early for preshow trivia and a drink during 21+ screenings.

Special Screening
If you’ve been there, done that with the outdoor summer movie scene, Campout Cinema offers an indoor experience—that may make you think you’re outside. Watch a movie on MoPop’s 70-foot Sky Church screen as LED stars twinkle overhead. Or, check out [email protected] at Redmond’s Marymoor Park where movie trivia, a variety of performers and food trucks are part of the evening’s show.

The Show Boat
Take a 45-minute boat ride to Blake Island, legendary home of Tillicum Village, as part of the Tillicum Excursion. This immersive experience in Pacific Northwest native culture, originally designed for Seattle’s 1962 World’s Fair, celebrates tribal culture without pandering (too much) to tourists: Feast on chinook salmon baked on an alder wood fire as you take in wood-carved artwork from the region and watch a showcase of Native American culture, including songs, dances and storytelling. $84. Waterfront, Pier 54, 1001 Alaskan Way; 888.623.1445; argosycruises.com/argosy-cruises/tillicum-excursion

The Learning Center
Dive into the Northwest’s Native American roots with a visit to Daybreak Star, a 20-acre cultural center in Discovery Park that is run by the United Indians of All Tribes. The building features art and architecture by PNW tribes. An annual three-day Seafair Pow Wow (July 14–16) draws more than 10,000 people for live music, dancing, and traditional food and crafts. Free. Magnolia, 5011 Bernie Whitebear Way; 206.285.4425; unitedindians.org

Friday Night Lights
Few things in the city are more cherished than listener-supported radio station 90.3-FM, which holds free, family-friendly, beer-garden-furnished Concerts at the Mural on Fridays through August. Past shows have featured regional “it” groups, such as The Thermals, Tea Cozies and Pickwick. Seattle Center, Mural Amphitheatre, 305 Harrison St.; 206.684.7200; kexp.org

Work Release
The free Out to Lunch Concert Series, held weekly throughout July and August during the lunch hour in various downtown parks, is a great way for time-pressed workaholics to take in some good tunes while staying hip to the constant changes to the city landscape. Various locations; downtownseattle.com

The Action Stars
Before Bruce Lee became an internationally renowned Hollywood star, he was just another University of Washington student who waited tables on the side, and Seattle is where he was put to rest. Lee and his actor son, Brandon, are buried side by side at the Lake View Cemetery, next to Volunteer Park. Visit early if you want to beat the crowds and have a moment for quiet reflection on the martial arts legend. Free. Capitol Hill, 1554 15th Ave. E; 206.322.1582; lakeviewcemeteryassociation.com

The Music Legend
Greenwood Memorial Park is a bit off the beaten path, but once you’re at the Renton cemetery, the memorial to rock ’n’ roll legend Jimi Hendrix is easy to spot. A large dome houses  granite pillars that feature images of Hendrix and his lyrics, often covered in lipstick from adoring fans. You may also see those fans playing his classics at the site as they pay their respects. Free. Renton, 350 Monroe Ave. NE; 425.255.1511; jimihendrixmemorial.com

The Local Legend
There’s no tour like Bill Speidel’s Underground Tour, where guides will talk you through Seattle’s discovery and development as you walk beneath the sidewalks of today’s Pioneer Square. Tour the vestiges of Seattle version 1.0—with a little bit of haunted lore thrown in—and learn why the city of today sits on top of the old one. $20. Pioneer Square, 614 First Ave.; 206.682.4646; undergroundtour.com

Go For The Gold
At the Klondike Gold Rush National Historic Park in the historic Cadillac Hotel, you’ll learn about Seattle’s role in the late-1890s madness when thousands of people with fantasies of riches rushed to the Yukon gold fields. This national historical park is the second smallest in the U.S. Free. 319 Second Ave. S; 206.220.4240; nps.gov/klse

The Headliner
Traveling exhibits (like the anticipated Yayoi Kusama: Infinity Mirrors, opening June 30) live alongside the permanent collection at the Seattle Art Museum, which includes a focus on Native American and Pacific Northwest artists. Among its recent acquisitions is The Hunter and The Wolf series by Greg Colfax, silkscreen prints that pay homage to Colfax’s Makah tribal roots. $24.95. Downtown, 1300 First Ave.; 206.654.3100; seattleartmuseum.org

The Hidden Gem
Don’t let the stunning eco-friendly wood design or the well-groomed landscaping around the Bainbridge Island Museum of Art (BIMA) distract you from coming in for a peek at the work of contemporary Kitsap and Olympic peninsula artists. Content to be the “off Broadway” of Seattle-area art experiences, BIMA welcomes day visitors, who will find the museum an easy walk from the ferry terminal. Free. Winslow, 550 Winslow Way E; 206.842.4451; biartmuseum.org

Get on Your Feet

Step Outside
The summer Dancing Till Dusk series takes place in several parks in the greater downtown Seattle area, with each event preceded by a lesson. Instructors keep things lighthearted—so you’ll feel ready to cha-cha-cha or swing with your partner, no matter your dancing expertise. Free. Dates and locations vary. danceforjoy.biz

The Inside Track
At the Century Ballroom, enjoy dancing the night away, with salsa and swing among the dance styles featured—with a little hip-hop thrown in to keep you on your toes (pun intended). Times and prices vary. Capitol Hill, 915 E Pine St.; 206.324.7263; centuryballroom.com

The Jet Set
Get a taste of Seattle’s aviation past and present at the Museum of Flight, including a rundown of Boeing’s history and plenty of hands-on experiences for little ones. Climb into an F/A-18 Super Hornet cockpit or a space shuttle crew compartment, and explore the inside of an air traffic control tower. The museum also hosts an impressive array of World War I- and WWII-era fighter jets. Prices vary. South Seattle, 9404 E Marginal Way S; 206.764.5700; museumofflight.org

The Frequent Flyer
Paul Allen’s private stock of rare military aircraft, the Flying Heritage Collection, is focused on artifacts of the early 20th century, including the Curtiss JN-4D Jenny, America’s first mass-produced plane. Dig into a digital archive of interviews with men and women who experienced opposing sides of war, from World War II to the Gulf War. $14. Everett, 3407 109th St. SW; 206.342.4242; flyingheritage.com