Trying to predict the future is humbling, but even when we know we'll probably be wildly wrong, it's fodder for good conversation

By Seattle Magazine Staff and Guests 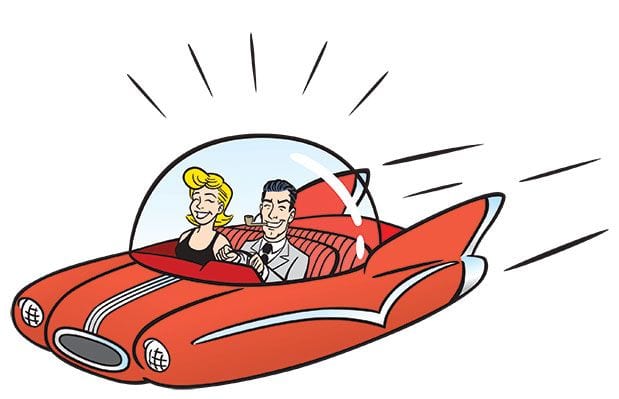 Had I been making predictions about the future back in the 1960s, I would have been wildly wrong.

The Kingdome didn’t outlast us all.

Supersonic jets never caught on—in fact, not building them helped plunge Seattle into a deep recession. People who did bet on them, the French and British, lost their shirts, and now a Concorde sits in the Museum of Flight.

Perhaps we should have a Museum of Flights of Fancy.

The pundits 50 years ago believed Seattle would grow massively, and we have—and the city’s updated comprehensive plan, Seattle 2035, predicts that we’ll add another 120,000 people between now and then. But beware of the steady trend line; it doesn’t always lead in one direction. Just when you think things will go on forever, something surprises you: the Great Depression, Boeing’s “Turn Out the Lights” layoffs of the ’70s, the dot.com bust, the Great Recession. Seattle has grown, but hard as it might be to believe today, the city lost 37,000 in population between 1970 and 1980. We shrank like a Rust Belt burg. We didn’t surpass our 1960 population peak of 557,000 until the year 2000, when we hit 563,000. With all the cranes and construction, growth is real—but there will be hiccups.

Fifty years ago, we didn’t fully understand the city’s earthquake risks, and not until the 1980s did we realize we built this city on seismic rock and roll, straddling a major fault. Most folks didn’t reckon on skyscrapers sprouting in Bellevue, but Seattle now has a major urban competitor across the lake. Climate change carries many questions: Will there be an influx of climate refugees? Will we have enough water? Will our red cedars and Doug firs give way to palms and pines? A burp from Mount Rainier could rewrite our history in a moment, something most of us never thought about until May 18, 1980, when Mount St. Helens blew.

I would not have predicted armed Coast Guard vessels accompanying our ferries across the Sound and the threat of terrorism.

The future humbles us. We must plan for it. We have fun imagining the possibilities. Projecting gives us a guide, a good excuse for thought and conversation. The stories on the following pages do that—they get us thinking about the Next 50.

Novelist Jim Lynch wrote of Seattle that we’re a “city so short on history it’s mostly all future anyway.”

The thing is, most of our crystal balls are a little cracked. Which only makes the future more exciting. KNUTE BERGER 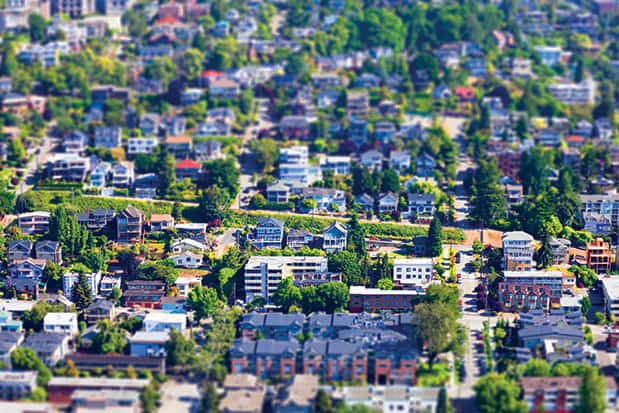 The Spaces Where We Live: A or B We asked in-the-know Seattleites to make some informed predictions about our city two to three decades into the future. Streets with no traffic, housing for all and the Mariners in the World Series? We can dream.

Cranes continue to lift steel and glass across Seattle’s skyline, relentlessly attempting to keep pace with the city’s influx of new residents. Some Seattleites look favorably on the present economic growth; others look warily, considering the city’s future. Will the increase of housing projects merely respond to the short-term boom or proactively enact a vision of a livable urban future? We have two choices:

A. Large dwellings. Superfluous square footage marketed on size. Lacking regard for a diverse population. Speculative and generalized. No care for design. Boom and bust profits. Built for current demand. Torn down in our lifetimes.

In 1932, modernist avant-garde artist and critic Karel Teige discussed the importance of reading “the story of tomorrow between the lines of today’s realities.” The words resonate with present-day Seattle. Only we can create our own urban reality. We can react to circumstance, or we can plan for the future we desire. GARRETT REYNOLDS, architect at Bohlin Cywinski Jackson in Seattle, and ALEX MURRAY, doctoral candidate and instructor of entrepreneurship and innovation at the University of Washington.

Neighborhoods: Housing is at a premium. What will Seattle neighborhoods look like in the future?

Seattle’s unprecedented growth is visible in neighborhoods across the city—from block-spanning six-story apartment buildings in Ballard to townhouses in southeast Seattle. With 120,000 people expected to move here over the next 20 years, where will they all go?

Seattle 2035, the biggest overhaul of the city’s comprehensive plan since the 1990s, is an attempt to answer that question, a road map for how and where the city will grow. After much tense debate between various factions, the plan that is emerging anticipates 70,000 new housing units across the city, with growth concentrated in specific areas.

The plan (along with the separate, and more controversial, proposal called the Housing Affordability and Livability Agenda, or HALA) is based on the premise that Seattle has a housing shortage that is quickly turning us into San Francisco, and that if we want to deal with this shortage and provide enough housing for all those newcomers, we’ll need to build more housing. In order to control that growth and preserve Seattle’s traditionally single-family neighborhoods, Seattle 2035 directs most of that growth (through selective upzoning) into designated urban centers and urban villages (think a densified South Lake Union and an even more densified Ballard).

What will this focus on neighborhood centers, known as the “urban village strategy,” mean in practice? Although opponents of both the 2035 plan and HALA have predicted the “Manhattanization” of Seattle’s single-family neighborhoods and mass-scale demolition of the city’s historic Craftsman bungalows, the reality will almost certainly be subtler. Picture more backyard cottages and mother-in-law apartments in single-family neighborhoods; more three- and four-story apartment buildings in areas that are currently on the edges of commercial districts, like NW 85th Street in Crown Hill and S Othello Street in Rainier Beach; and tweaks to zoning to allow apartment buildings to be one or two stories higher across the city.

The city, in other words, will grow up, not out, and that means changes that some will find uncomfortable. The single-family home with a large, private yard that exemplified prosperity in the mid–20th century will give way in some areas to townhouses with shared front yards, condos without parking and micro apartments that are affordable to the working-class people and students who are currently being priced out of Seattle. In 2035, if all goes as planned, the city will be a place where parks are abundant, neighborhoods are diverse both racially and economically, and most of the population will live within a 10-minute walk of transit.

And those 120,000 new residents? They’ll have a place to live. ERICA C. BARNETT, C is for Crank blog

Up: Ages 65 and older will increase (1 out of every 5 people will be in this group)

Down: Ages 30–59 will decrease slightly

Down: Ages 20–30 will decrease slightly (3 out of every 10 Seattleites will be in this group)

Down: Ages 18 and younger will decrease (and is already low compared to national average of 15–16 percent of the population)

Up: Minorities will be majority (today, about one-third of Seattleites are people of color)

Body Politic: In the decades ahead, what’s old may be new again if the past year has taught political analysts anything, it’s to be mindful of the unknown and unknowable. When it comes to predicting Seattle’s future political leanings, that means we start with what we do know.

We know that Seattle is growing fast, and that today’s new arrivals skew toward being college-educated, high-income-earning and younger. Elections, especially local ones, often are starkly divided based on age, education, income and neighborhood. So as these newcomers shift Seattle’s demographics, they’ll gradually shift Seattle’s politics as well.

How so? Recent years have seen an acceleration of jobs in the tech industry and residential growth focused on the urban core. Voter registrations in new residential buildings are increasingly trending young; in 2015, 80 percent of those in newly constructed buildings who registered to vote were younger than age 45, far higher than the city average of 52 percent. If this keeps up, Seattle’s median age—stable for years—may begin falling, even while mean income (up steeply from $84,524 in 2010 to $97,591 in 2014) and housing prices rise. Seattle may be on track to become younger and less affordable.

Assuming that educated, young information workers become a bigger part of Seattle’s population, how will the city’s politics change? The conventional wisdom says that these newcomers will lean libertarian: socially liberal but believers in free markets, deregulation and the power of innovation over government intervention. Many even perceive this group as politically apathetic, or even hostile, to the concerns of working-class Seattleites. But election results are telling a different story.

Seattle’s young, well-off newcomers have political views more in common with progressive Capitol Hill than moderate Laurelhurst. The voting precincts dominated by new-construction apartments—such as those in Ballard, Interbay and South Lake Union—voted overwhelmingly in favor of local transit measures and campaign finance reform. In the May presidential primary, they voted Democratic by a 9-to-1 margin, even bluer than Seattle as a whole. Donald Trump received a thudding 5.2 percent of the vote. If anything, it appears that new Seattleites may move the electorate leftward.

Of course, there are many factors that could significantly alter predictions and political leanings. A crash in the tech industry could see population reversion. The GOP may reverse its anti-trade, immigration-skeptical direction and deemphasize social issues. Young workers may start families and leave the city. National demographics may shift. All of these would have major implications in Seattle.