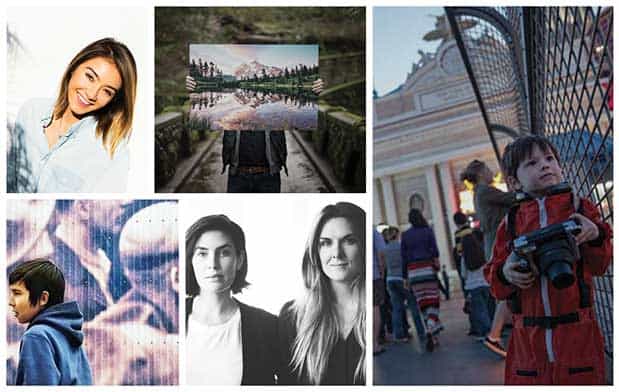 There’s no questioning where 6-year-old shutterbug Hawkeye Huey got his eye—his dad, Aaron Huey, captures amazing images for National Geographic magazine. Thanks to dad’s job, Hawkeye’s had the opportunity to travel around the world during breaks from kindergarten in Maple Leaf, shooting on his analog Fujifilm Instax camera. His father uploads the photos and maintains Hawkeye’s Instagram account, but otherwise gives the tot no instructions on what or how to shoot: “I do check to see if he remembers to set his camera for ‘close up’ or ‘far away,’ the only two settings for focus,” he says. Hawkeye’s unique perspective has not only garnered him myriad followers, it also helped him nab a Nat Geo editorial assignment of his own, shooting National Parks. Although Hawkeye’s first book, Cowboys Indians Hobos Gamblers Patriots Tourists & Sunsets: A Portrait of the American West ($55; outsiderbooks.com), comes out this month, he told us he doesn’t want to be a professional photographer when he grows up, but rather a mechanic or an engineer. “I want to work with metal things,” says Hawkeye, “like underwater things, like submarines.”

Superstar former librarian and bookseller Nancy Pearl is an author herself these days, having written three volumes of Book Lust, in which she recommends books for “every mood, moment and reason.” Pearl can often be heard discussing her recommendations on National Public Radio, but you can also find out what she’s reading via her tweets, in which she also shares literary news and timely author quotes. A self-taught photographer who now teaches photography himself (at Seattle Central College), Hillman City–based Brad Puet focuses on storytelling through impromptu street portraits—think “Humans of New York” but all over the country, including right here in Seattle.

Pro photographer Valeriy Poltorak was born in the Ukraine but raised in the Pacific Northwest—and the striking natural beauty of the local landscape is the most frequent subject of his Instagram posts. “My passion for photography is built upon my desire to travel, love for my family and life lead by faith, leaving me to glorify God in all that [I] do,” says Poltorak. The Federal Way–based photog created the hashtag #faithfilledcaptions to share his beliefs, but his work is inspiring whether or not you’re a believer.

Poet, performer and songwriter Hollis Wong-Wear fronts Seattle electronic-pop band The Flavr Blue. You might also recognize her sweet but strong voice from her collaborations with another local: Macklemore. Earlier this year, the Grammy-nominated Wong-Wear penned a moving response on the damages caused by stereotyping after a headline in The Seattle Times referred to her as the rapper’s “sidekick.” Rightly so. In addition to her artistic talents, she is a community advocate who often addresses issues of race and gender as a speaker at public events—and, of course, via social media.

Last year, Jen Utley (above left) and Genevieve Pierson (right) started Common Thread Creative, a small West Seattle–based production house that creates branded video and photo content. But, Utley admits, one of the main reasons they wanted to launch their own business was to give them the flexibility to continue their passion project: Project Girl Crush. Through the website and its associated social media accounts, they share profiles of local female entrepreneurs, artists, athletes and others “to inspire women to connect rather than compete.” It’s hard to stop looking at the local artist’s “Shopped Tattoos,” an ongoing collection of images of past and present celebrities that Randall has edited with heavy tattoos, using Photoshop. One of the Hollywood stars he featured, James Franco, recently came to Seattle to collaborate with Randall on a mural for the artist’s “Hollywoodnt” show at Pioneer Square’s Treason Gallery.