A Shift in the Work Environment: Density is the New Incubator

Knute Berger asks, where does the mother of invention live? 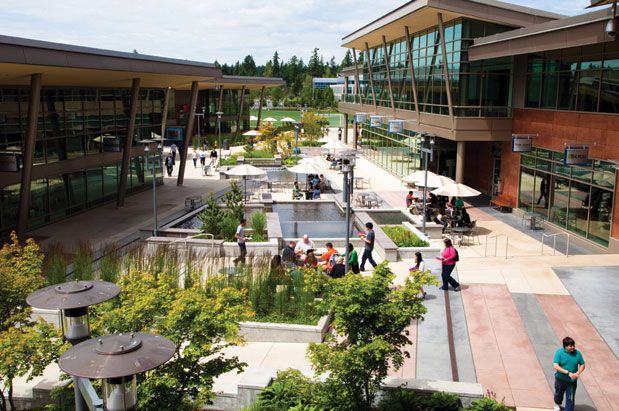 Seattle is widely considered an inventive city. We rank 13th in the world when it comes to “patent intensity,” the ratio of patent applications compared to the city’s population. And, the University of Washington recently reported it now ranks among the top five American educational institutions that incubate new businesses by parlaying research into commercial applications. That’s a jump from 15th two years ago, which puts UW right up there with MIT and UCLA. We’re a creative city, too—the arts are widely touted and embraced—but creativity, broadly speaking, seeps into all sectors, from computer gaming to biotech.

The landscape of business invention, or more broadly, innovation, changes with time. From the ’50s through the ’80s, many major businesses that relied on “knowledge workers,” from Boeing engineers to software coders, moved to the suburbs to create park-like campuses that were thought to stimulate creative juices and big ideas. Employees commuted to places with low-slung buildings and manicured landscaping, tucked away from the rough and tumble of the city and the sprawl outside company walls. Some of these complexes—Microsoft’s main campus in Redmond, for example—took on the feel of college campuses, places where young, brainy workers could focus without distraction.

The trend has shifted in recent years, exemplified by Amazon’s expansion in downtown Seattle, where the company is building high-rises. Amazon’s new headquarters will offer employees respite, but instead of a park, it’s building bio-domes. Other tech companies are opting for urban neighborhoods, including Fremont (Adobe), Pioneer Square (game companies), South Lake Union (biotech), Kirkland (Google), and downtown Bellevue (Microsoft). Density is the new incubator.

The shift is highlighted by a ’60s-era creative space that was recently put on the state’s “most endangered” heritage list: the Talaris Conference Center in Laurelhurst. Built for the think tank Battelle Memorial Institute, the center was where brainiacs used to tackle energy and defense work for the government. Their big thoughts were nurtured by the design of legendary landscape architect Richard Haag, who also designed Gas Works Park. The old campus is about to be converted into a housing development. The Washington Trust for Historic Preservation and neighbors are lobbying to protect it, but the repurposing of the property is emblematic: The pastoral is passé.

The physical and mental landscape of our region’s inventiveness is part of the focus of a new permanent exhibit at the Museum of History & Industry called the Bezos Center for Innovation, which opens on October 12. The center, funded with a $10 million gift from Jeff and MacKenzie Bezos, attempts to survey the history of innovation and offer wisdom shared by locals ranging from Amazon’s Bezos and Starbucks’ Howard Schultz to biologist Leroy Hood and glass artist Dale Chihuly.

Innovation is tied to place, but how? Architect Alan Maskin, principal of the firm Olson Kundig, which designed the new center, says that today’s innovation story isn’t fully told by the solo genius having a “eureka” moment, but is the result of a web of interactions. Innovation has a collaborative dimension, from task-oriented teams to crowd-sourcing to the idea of people sharing working spaces. “Seattle is a place where researchers run into musicians on the trails or at the local farmers’ market and those elements of a place factor into innovation,” Maskin says. Cross-pollination is the key. The new exhibit will have interactive elements asking young people to share their ideas for solving specific problems, helping them tap their inner innovator and provide brain fodder for other young problem-solvers.

It used to be thought that Seattle’s geographic isolation was a virtue—we were forced to be more self-reliant in manufacturing, we had abundant resources, we developed “the Seattle Spirit,” which meant that innovation came from yanking hard on our own bootstraps. In the global era, we’ve shifted to a new model, where our more diverse urban culture, access to capital and global connectedness are seen as competitive advantages. Seattle is being reconceived as a citywide think tank in a setting that can’t be matched by any mere campus.