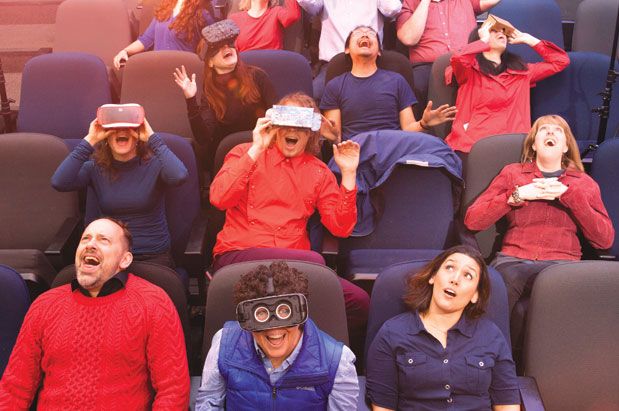 For more than 40 years, the Seattle Independent Film Festival (SIFF) has introduced its patrons to up-and-coming talent and films not seen anywhere else in town.

This year, a four-day festival within the festival will do more than show viewers new films—it will offer entirely new ways of experiencing film. Produced by Mad Eye Media in collaboration with SIFF, the new SIFFX festival—Thursday–Sunday, June 2–5, at Seattle Center—will give viewers the opportunity to learn about “immersive storytelling,” which allows them to essentially become part of the story through new virtual reality (VR) techniques and tools, including 360-degree filming and VR headsets.

The opening-night of SIFFX includes a screening of The Crossing, a compilation of actress and political activist Susan Sarandon’s video diaries from Lesbos, Greece, which offers a close-up look at the Syrian refugee crisis. Produced by Academy Award–nominated immersive-media company RYOT, the 360-degree film will be projected on the ceiling of the Pacific Science Center’s Laser Dome, literally putting audience members—who will watch while reclining on floor cushions—at the center of the action.

“It’s extremely powerful to experience a story that you’re fully immersed in playing over your head,” says Sandy Cioffi, director of Mad Eye Media and SIFFX. “It’s wonderful, in the truest sense of the word.” Audience members will have access to Google Cardboard VR headsets loaded with the same footage, allowing them to compare the virtues of a shared viewing experience with a solitary viewing.

In addition to a keynote address by Nonny de la Peña, often called “the godmother of virtual reality,” and a biennale-style retrospective of her groundbreaking work, the festival includes many opportunities to learn more about the technology and talent behind transmedia storytelling—the catchall term for this new wave of cinema—and how techniques used in transmedia could alter the roles that directors and audiences play.

Cioffi says she hopes that SIFFX will help “excite, educate and inspire” those who could be the future of this new cinematic language. She envisions aspects of transmedia storytelling—which incorporates techniques such as 360 filming, VR and projection mapping (aka spatial augmented reality) by which video is projected onto 3-D surfaces instead of flat screens—becoming integrated into the mainstream over the next few years. Seattle—and SIFF—could be at the center of that, she believes.

“Looking at the strengths we have here in Seattle in the gaming and tech fields, and then this other, heretofore relatively separate strength of cinema/art/storytelling talent…those two communities are really just starting to mingle in a formal way. It’s an exciting time.”

Events and dates were being confirmed at press time; visit siffx.net for updates.