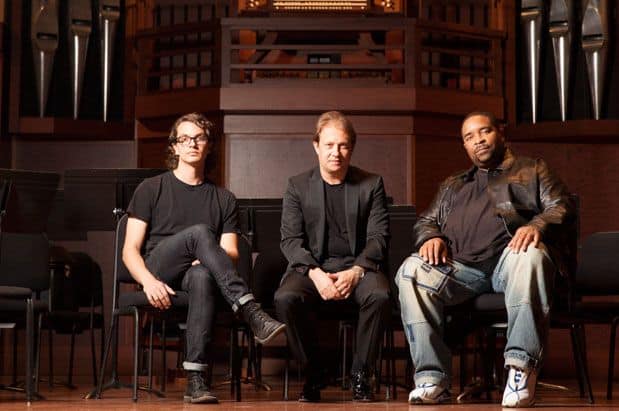 This article originally appeared in the June 2014 issue of Seattle Magazine.

!–paging_filter–pOne of the many cool things about the Seattle Symphony’s groundbreaking Sonic Evolution program, according to maestro Ludovic Morlot, is that it brings people to Benaroya Hall who’ve never been there before. People such as, say, Sir Mix-A-Lot, who, before the photo shoot for this magazine, had never set foot inside the phenomenal concert hall (he was visibly wowed by the acoustics), but who will take the stage there this month—with the symphony playing backup on a new orchestration of his songs “Posse on Broadway” and “Baby Got Back.” brbrSurprising new takes on much loved Seattle music is the whole point of Sonic Evolution, an innovative program Morlot first dreamed up for the 2011–2012 season—his first as music director of the symphony. “The best way to grow is through unusual and unexpected collaborations,” he says. “They give a different perspective on so many things.” brbrIn the case of Sonic Evolution, the collaboration takes two forms. First, world premieres by acclaimed young composers from all over the world, whom the symphony commissions to write entirely new pieces that pay tribute to Seattle’s ongoing music heritage. Past events have featured stunning original work based on the music of Jimi Hendrix, Kurt Cobain, Quincy Jones, Alice in Chains and Blue Scholars. Next year’s plans include a composition based on Pearl Jam’s oeuvre, and Macklemore is on the list of options for future iterations. brbrThis year’s inspirations are jazz pioneer Bill Frisell (reshaped by Portuguese composer Luís Tinoco), Ray Charles (tackled by Shanghai native composer Du Yun) and Sir Mix-A-Lot (remixed a lot by English composer Gabriel Prokofiev, grandson of the legendary Sergei Prokofiev). But don’t expect to hear glorified Muzak versions of the music. For the composers, Morlot explains, “The rule is it can’t just be an orchestration of the songs. They need to look at the whole landscape of the work, the style of sounds used, even the messages in the lyrics. They can’t quote material. We don’t want the audience to recognize any of the songs.” brbrWhile this might sound counterintuitive to fans (“Just play the hits!”), at previous Sonic Evolution shows, the tactic has proved a huge success—thanks especially to Morlot’s selection of highly inventive composers. Listeners are treated to complex new soundscapes that honor and echo the source material (a familiar chord here, a scrap of reminiscent rhythm there) without being enslaved by it. brbrThe second component of Sonic Evolution is live performance by an up-and-coming local band, which plays several of its own songs as orchestrated for the full symphony. Star Anna and Hey Marseilles received this honor at the previous two installments, and this year is a special case—with both Sir Mix-A-Lot (whose real name is Anthony Ray) and soul-inflected indie rock band Pickwick performing songs (orchestrated by Prokofiev and composer David Campbell, respectively) upstage as the Grammy-nominated orchestra plays along right behind them.brbrThe intention of all this, Morlot says, is to “expand the symphonic repertoire by commissioning young composers, and give attention to the Seattle music scene by collaborating with local bands.” He emphasizes that all the musicians involved—the composers, invited performers and symphony players—benefit in this scenario, because everyone brings some piece of the experience back to their own music making. Sir Mix-A-Lot knows exactly what he means. “You hear things really differently when you’re coming from a different genre,” he says. “And I always incorporate the new sounds I hear into my music.” Sir Mix-A-Lot is thrilled by what he’s heard so far of Prokofiev’s orchestration. “The integrity of the song is there, but it sounds huge,” he marvels.brbrA portion of the crowd will attend Sonic Evolution specifically to hear Sir Mix-A-Lot—in whatever form—which is, of course, part of the impetus behind the program: to bring new audiences to the symphony. “It’s exciting because some people will come for Sir Mix-A-Lot, some will come for Pickwick, some will come because they are eager to hear the new voices of the young composers,” says Morlot. “These audiences are always very mixed.” The symphony reports that single-ticket buyers, which include new attendees, make up about 22 percent of the Sonic Evolution audience. Approximately 29 percent of these new attendees will return for other symphony concerts.brbrBut in addition to making the symphony compelling to new (and younger) crowds, Morlot believes Sonic Evolution comes closer to symphonic concerts of yore. “It’s important to remember that the concert hall was originally a place where music making happened collaboratively, sometimes improvisationally. We’ve lost this idea over the years,” he says. “But when you come to the concert hall, you should be able to hear music written by living composers, who share the stage with all kinds of different artists.”brembrSonic Evolution. 6/6. 8 p.m. $19–$29. Benaroya Hall, 200 University St.; 206.215.4747; a href=”http://www.seattlesymphony.org” target=”_blank”seattlesymphony.org/a/em/p