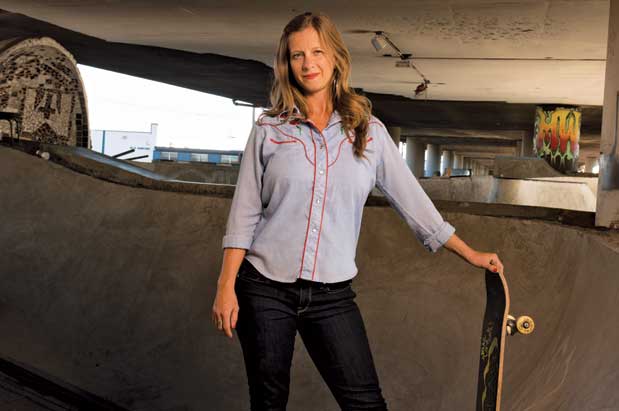 For Skate Like a Girl (SLAG) cofounder Fleur Larsen, the best part about teaching girls how to skateboard is opening them up to a whole new world of empowerment. “A lot of learning to skateboard is about trusting your body, taking healthy risks and learning in a community,” she says.
Larsen, 34, and business partner Holly Sheehan, 40, began introducing girls and young women to this male-dominated sport in 2000. Growing up, they noticed they were almost always the only girls hanging out at skate parks. “We are both snowboarders, and we had grown up around skateboarding, but it was a classic boy thing. We wanted to change that,” says Larsen, who is now in graduate school studying education. The two held their first workshop at Ladyfest in Olympia. When more than 40 participants showed up, they knew they were filling a void in the community. Since then, the volunteer-run organization has grown, moving its Olympia chapter to Seattle and expanding to Portland and San Francisco.
SLAG’s class roster has also grown, offering free drop-in sessions, clinics ($20 suggested donation per family) and weeklong camps ($190) year-round—all held at skate parks throughout the Seattle area (Larsen’s favorite is the Marginal Way park at East Marginal Way S and S Hanford Street). She says many moms and dads take classes with their daughters, using it as a bonding experience. “We’ve taught lot of women to skateboard,” Larsen says. “The most powerful experiences are watching teenagers and women become liberated and more connected to what their bodies are capable of.” skatelikeagirl.com