Band of the Week: Hoop drops its debut album this week. 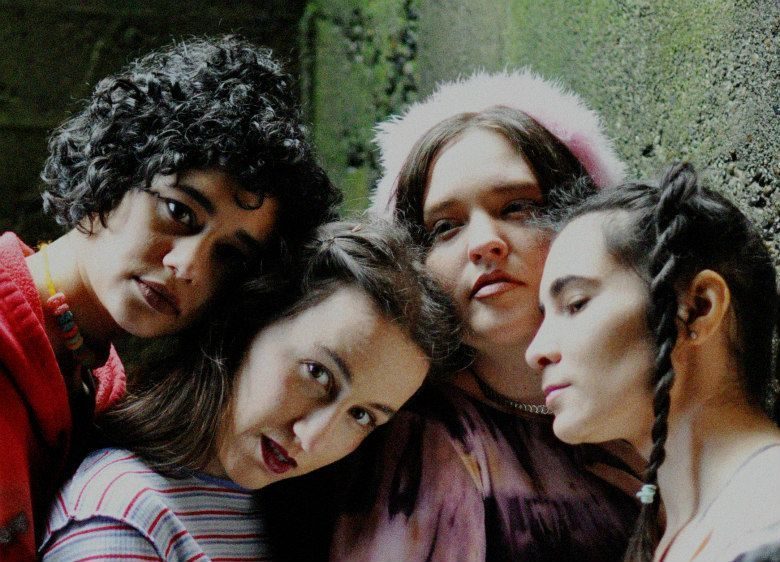 With so much happening in Seattle’s bustling music scene these days, how do you even know where to start? Allow the highly trained culture curators of Seattlemag.com to help with Band of the Week. This week, meet fuzzed-out twee poppers Hoop. The band drops its debut album “Super Genuine” on Friday, with release shows at the Timbre Room (Thursday) and Everyday Music (Friday).

Ahead of the shows, Hoop dished on being dubbed “soft grunge,” the joys of the Discover Pass and the pitfalls of playing in front of cis white guys.

In three sentences or more, tell us the story of your band. Hoop began in 2015 when housemates Caitlin Roberts, Leena Joshi and Pamela Santiago set up our gear in our Wedgwood living room and started jamming regularly. We started writing songs collaboratively and also worked on songs that Pamela and Caitlin each wrote separately prior to forming the band.

Caitlin had a record that she made while she was living in Anacortes the previous year. The band adopted the songs from that record. Leena also started writing some songs on bass. Live, we play songs by each of the songwriting bandmates, rotating instruments during the set. Inge Chiles, whose main music project is called Ings, saw us perform at one of our first shows and shortly thereafter joined the band on second guitar and vocal harmonies.

Tell us about the new project (themes, inspiration, personnel, release details, etc.) and/or what have you been working on these days? The genre has been described as “soft grunge.” We’re still not sure what that means, but we’ll take it. Thematically, the record deals with unbalanced power dynamics in a relationship. Caitlin co-wrote the record with Nicholas Wilbur—the engineer at The Unknown, a recording studio in an old church in Anacortes—over the summer of 2014 when she lived there.

Allyson Foster, an Anacortes resident whose voice you will recognize from recordings by Hungry Cloud Darkening, Mount Eerie and [others], sings on six tracks. We were also lucky enough to have Briana Marela, an incredible vocalist and electronic musician from Jagjaguwar Records, sing on several songs on the album. Hoop recently toured down to California with Briana. She used to live at our house in Wedgwood so it was fun to travel with her. In Briana’s words, it was like we lived together again, but our house was the van.

What does being an artist/musician/band in Seattle mean to you? We have all lived in the Seattle area for nearly a decade (except Inge who moved here in 2014). Playing music here, you can’t not be influenced by the natural beauty of the region, which lends a certain kind of creative clarity. The band has grown out of several innovative and playful music scenes here that are interconnected, and they’ve been incredibly supportive.

Our local shows here tend to have a pretty homogeneous audience. Mostly straight cisgender white males, which is a problem because a lot of the music we make offers healing for people who have gone through struggles like verbal abuse, for example, which is something that disproportionately affects people with less privilege, like femmes.

We are being really vulnerable on stage with our emotions and it feels a lot safer to do that in front of an audience that’s less homogeneous. We pretty much only play POC-centric and femme-centric bills, partially for our own comfort, but also with the intention for the music scene to be pushed in that direction, and to inspire other less-privileged people to make and share their music.

What BIG question should we ask, and what’s the answer? Q: “You have a great visual aesthetic. Where does that come from?”

One of the joys of being in a band with visual artists you adore is that all the art associated with the band is also a constant nonverbal conversation. Three of us also live together so there’s a [daily] exchange of ideas. Pamela makes beautiful drawings. Leena is an innovative video artist and poet. Inge’s vision comes through in the music videos that she directs for her own project.

Our former housemate Lucinda Roanoke is an extraordinary photographer and has done a couple photo shoots for the band. Amanda Leaty lives with us and is always contributing to a collective fountain of visual concepts. Frances Whitmore is a clothing designer who styled us for a recent shoot and her work is ceaselessly inspiring. So, to answer your question, our great visual aesthetic comes from us and our friends.

What’s next? We’re hoping to tour on ‘Super Genuine’ in the fall and then go to Europe next spring. This summer we’re taking a breather after all the work it’s taken to release this record. Personally, I’m planning to use my Discover Pass every weekend and spend a lot of time at the beach and in the mountains.