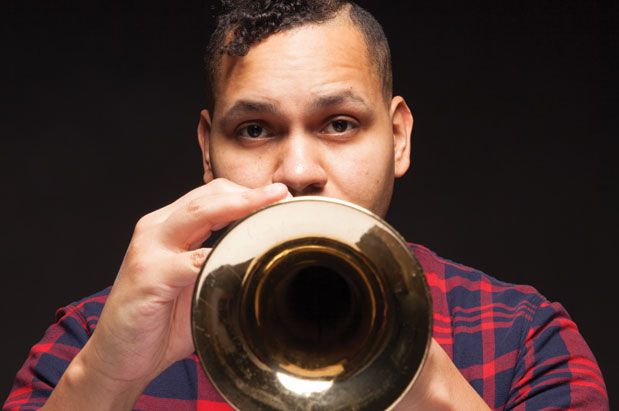 After debuting at town hall in 2012, completing a critically praised and sold-out run at On the Boards in December 2014 and performing in New York’s Under the Radar Festival in January, Seattle composer, comedian and trumpet player Ahamefule Oluo is bringing Now I’m Fine—an experimental, jazz-inflected pop opera about suffering, loss and redemption—back to the Moore Theatre for the night of April 2.

Oluo’s personal narrative is set to his own lively score and performed by a 17-piece orchestra that includes local luminaries Samantha Boshnack, Evan Flory-Barnes, Naomi Siegel and D’Vonne Lewis. Providing counterpoint to Oluo’s sober recitation are the ecstatic and anguished vocals of the virtuoso singer Okanomodé Soulchilde.

Oluo is the rare contemporary artist who succeeds at combining the tragic with the comic; the epic with the lyrical. He is not afraid to explore tonal possibilities that exist when integrating the expression of a live ensemble with the pathos of the spoken word. 4/2. 8 p.m. The Moore Theatre, 1932 Second Ave.; 206.682.1414

The native Inuit throat singer reclaims the 1922 documentary film Nanook of the North with an electrifying live sound score, subverting its damaging racial stereotypes. As one reviewer exclaimed, “It feels useless trying to describe a Tanya Tagaq performance. You experience it with your body rather than your mind.” 8 p.m. $30. The Neptune Theatre, 1303 NE 45th St.; 206.682.1414; STG Presents.

The sitar player and composer uses her instrument and the improvisational tradition of classical Indian music as a means of appropriating and integrating musical sounds and genres from around the world and across the centuries. Her tour coincides with the release of her new album, Land of Gold. 8 p.m. Prices vary. UW Meany Hall, 4140 George Washington Lane NE; 206.543.4880

Memorial Day weekend brings Northwest Folklife to Seattle Center for its 45th year. The region’s demographics have changed over the years, and the festival has evolved accordingly, making it a welcome place for newcomers to the Seattle area to celebrate their community. Times vary. Free. Seattle Center; 206.684.7300 KEXP fans will be able to look and listen in on in-studio performances when the station’s new home opens to the public in April.

KEXP-FM has certainly come a long way since its days as KCMU, a college radio station staffed by a few University of Washington students. The station now has a global reach and for decades has functioned as a highly esteemed arbiter of alternative musical taste. How did this occur? While many spoke of the end of radio during the onset of digital downloads and the Internet, the station became a powerhouse. The answer, of course, is that music listeners still sought out the playlists of veteran DJs, whose ears were attuned to sounds not yet on listeners’ collective radar. And rather than be sidelined by new technology, the station embraced it and found new and enthusiastic audiences across the world.

Now that the station has moved into its new, state-of-the-art $15 million location at Seattle Center, there are exciting changes in store. No longer content to transmit its signals through the airwaves and over the Internet, KEXP will now offer spaces for public events, a live performance space with an audience viewing area, an observable DJ booth and a library for music lovers at its new headquarters. The grand opening is set for April 16, which is also Record Store Day. 472 First Ave. N; 206.520.5800