Sculpture, photography and more from artists near and far 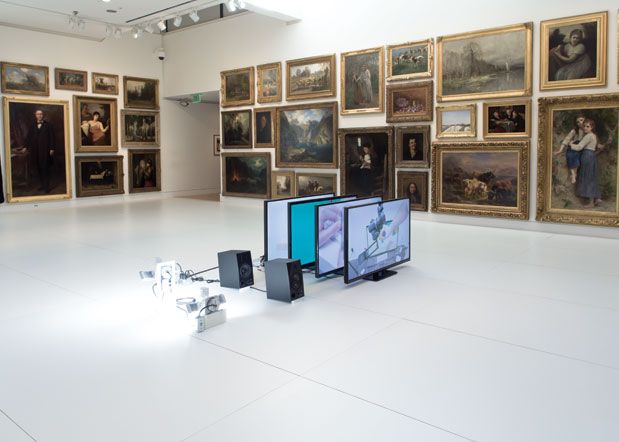 For those who find themselves confounded by the very nature and purpose of contemporary art, it takes a particular kind of artist to engage them; one who steadfastly embraces their confusion and ambivalence as characteristic of the larger world and the subject of his or her own work. Jason Hirata is just such an artist. His art has taken the form of stacked LED screens with feeds of Japanese animation and lonely home movies, surrounded by the collection of the Frye Art Museum; unassuming abstract paintings of intense color installed discreetly behind the columns of Seattle University’s Vachon Gallery; and other, similarly disruptive acts staged within the walls and context of traditional art venues. Now, as the 2015 recipient of the Henry Art Gallery’s biennial Brink Award, a $12,500 unrestricted grant given to an artist younger than 35 considered to be “on the brink” of an outstanding art career, the Seattle native and resident will have a solo exhibition at the gallery. Just what he will offer remains a mystery, but it will no doubt be deliberative and intelligent, and flirt with art world pretensions before winning us over with quiet candor and social relevance. 3/26–4/26. Times and prices vary. Henry Art Gallery, 4100 15th Ave. NE; 206.543.2280

Journey to Dunhuang: Buddhist of the Silk Road Caves

This exhibit includes photographs, manuscripts and artists’ renditions of the famous cave paintings from the ancient Silk Road city of Dunhuang, as documented by photographers James and Lucy Lo in 1943, capturing views of the interior and exterior that no longer exist today. Times and prices vary. Seattle Asian Art Museum, 1400 E Prospect St.; 206.654.3100

Inspired by the 19th-century German folktale Schneewittchen and the classic 1937 Disney movie Snow White, McCarthy creates a series of large (4- to 14-foot) sculptures out of black walnut, using computer mapping to digitally scale, shape and manipulate his forms. Expect him to bring the intrinsic horror of this familiar legend to their hard-grained surfaces. Times and prices vary. Henry Art Gallery, 4100 15th Ave. NE; 206.543.2280

Shaun Kardinal, the artist and comic genius who brought us the First Thursday Art Schlock Tumblr page, is currently offering up a more serious take on Seattle’s art scene. On the fourth Tuesday of each month, a featured artist will exhibit a new work created from the work another artist presented the month before. The resulting transfigurations and appropriations say much about the interrelatedness of media and sensibility in Seattle’s art community. The next artists will be Victoria Haven in March and Joe Rudko in April. Fourth Tuesdays through June. 6:30–9:30 p.m. Free. Joe Bar, 810 E Roy St.; 206.324.0407; Taketurn

The seattle sculptor and public artist whose sculptural investigations of his family’s dry-land farming history is currently on view at the Frye, will follow it up with this exhibit of recent work. Times vary. Free. Greg Kucera Gallery, 212 Third Ave. S; 206.624.0770

The Tacoma Art Museum, recently in the spotlight after a major gift from philanthropist Becky Benaroya, presents an exhibition of works from Northwest artists who were invited to submit work that illuminates how they are “actively responding to forces shaping our regional identity during this current wave of explosive growth and rapid rebound from the great recession.” Times and prices vary. Tacoma Art Museum, 1701 Pacific Ave., Tacoma; 253.272.4258

Seattle photo media artist Zwick is an astute observer of the ironies implicit in both nature and human culture. Her constructed tableaus and explorations of symmetry can leave observers contemplating the home as well as heavens. 9 a.m.–5 p.m., Monday–Friday. Free. Gallery4Culture, 101 Prefontaine Place S; 206.263.1589

Suyama Space begins its final year with an installation by California artist Joan Tanner, who has arranged a series of vertical structures made from construction materials and veneered with wood, sandpaper and Styrofoam that instill a sense of interference and dislocation in the viewer. Times vary. Free. Suyama Space, 2324 Second Ave.; 206.256.0809 Martha Rosler: Below the Surface

Rosler, the first recipient of The New Foundation Seattle’s 100K Prize, has long addressed matters of the public sphere and everyday life, especially as they affect women. This exhibit showcases the four-decade development of her House Beautiful: Bringing the War Home photo montage series, where, Rosler notes, “I was trying to show that the ‘here’ and the ‘there’ of our world picture…were one.” Times and prices vary. Seattle Art Museum, 1300 First Ave.; 206.654.3100