Spring Arts Preview: The Top Shows, Events and Exhibits of the Season

Pull out your calendar; it’s time to pencil in the season’s top performances, shows and concerts you won’t want to miss VISUAL ART
Jeffrey Gibson: Like a Hammer
2/28–5/12
The work of New York City–based artist Jeffrey Gibson, who is a Native American—part Choctaw and part Cherokee—gay and was raised in a military family that moved around a lot, explores the layers of his identity as an outsider, someone who learned to navigate life, he says, “on someone else’s terms.” The paintings, wall hangings and sculptures in this exhibit—among them boxer’s punching bags, stuffed figures and repurposed found items—are embellished with Native American regalia, including intricate patterns of beads, jingles and various textiles sometimes arranged to spell phrases. The resulting collection is a riot of color and texture that playfully draws the viewer into a world—the experience of another human being—impossible to ever fully know, but commanding one’s full consideration anyhow. Times and prices vary. Seattle Art Museum, downtown, 1300 First Ave.; 206 625.8900 Maestro Morlot at the podium. Photo by James Holt

CLASSICAL
Ludovic Morlot’s Final Concerts with the Seattle Symphony
6/13–6/23
If this were a TV series finale, it would be a two-part episode: Ludovic Morlot has conceived his final concerts as Seattle Symphony music director as one big program, starting June 13–15 with music by Wagner and by the French-born Morlot’s beloved compatriot Debussy, plus Richard Strauss’ elegantly ravishing Oboe Concerto, then concluding June 20–23 with more Wagner and Debussy. As his final word before taking time off to study and guest-conduct in Europe, Morlot has chosen Leoš Janáček’s rarely played The Eternal Gospel, with its luminous and soaring closing chorus. Times and prices vary. Benaroya Hall, downtown, 200 University St.; 206.215.4747; seattlesymphony.org MUSIC
Brandi Carlile with Neko Case and Emmylou Harris
6/1
By the time you read this, you’ll know whether Ravensdale native Brandi Carlile turned any of the six Grammy nominations for her 2018 album, By the Way, I Forgive You, into awards. For this show, her pure talent—a rich, expressive voice; heartfelt, lived-in lyrics; a killer band—is worth the price of admission alone. That she’s opened up the bill to include two of the world’s finest living female songwriters—in Grammy-speak, indie-rock queen Case has three noms, and country legend Harris has 13 wins and too many noms to mention—elevates this concert to festival status. 6 p.m. Prices vary. Gorge Amphitheatre, Quincy, 754 Silica Road; 206.682.1414; stgpresents.org AUTHORS
Morgan Parker
4/4
In her new collection of poetry, Magical Negro—whose title refers to the phenomenon Salon calls the “offensive movie cliché that won’t die”; cue Morgan Freeman as “God” or Will Smith as “Bagger Vance”—this prolific, prize-winning, degree-accumulating Los Angeles–based author, poet and arts organizer explores in expansive prose what has been described as “an archive of Black everydayness, a catalog of contemporary folk heroes, an ethnography of ancestral grief, and an inventory of figureheads, idioms and customs.” Parker reads from the collection. 7 p.m. Free. Hugo House, Capitol Hill, 1634 11th Ave.; 206.322.7030 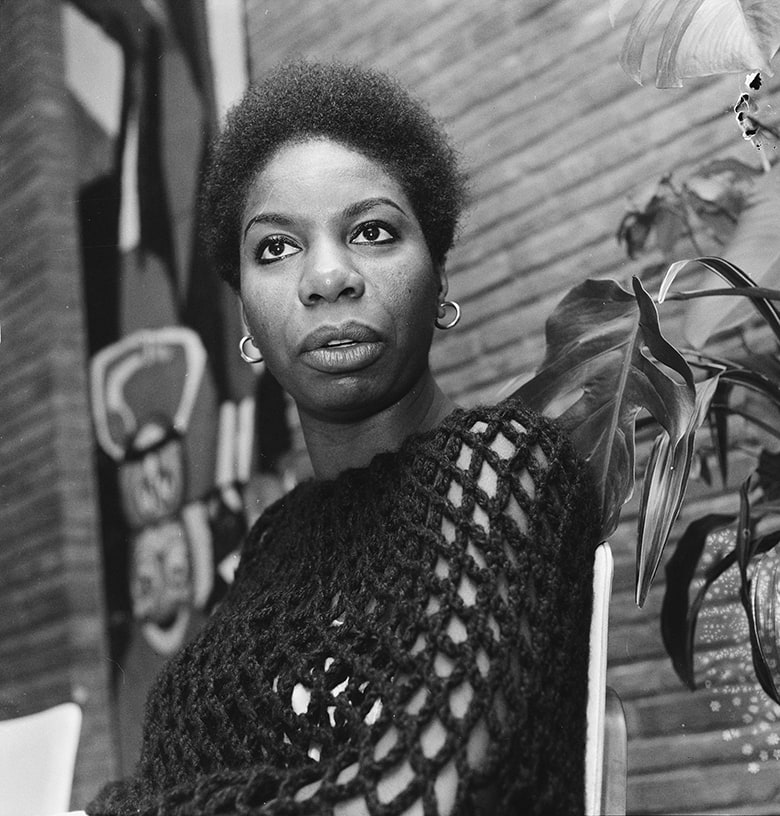 The incomparable Nina Simone, in 1965. Courtesy of Ron Kroon/Anefo Items on view at Seattle Style include a Wayne Wichern black and white rose hat. Courtesy of MOHAI

EXHIBITIONS
Seattle Style: Fashion/Function
5/4–10/14
At this fashion retrospective, garments reflecting the city’s reputation for utilitarian wear will expectedly be on view (it’s no coincidence that Eddie Bauer was founded here, for example; you’ll see that company’s 1932 down bomber jacket), but also expect nods to haute couture, including fashion-forward residents such as designer Luly Yang. Along the way, you’ll see contributions from the Nordstrom empire (the company helped produce this show) and the likes of Kurt Cobain and his penchant for flannel, which helped inspire Marc Jacobs’ 1992 “grunge” runway show for Perry Ellis. Times and prices vary. Museum of History & Industry (MOHAI), South Lake Union, 860 Terry Ave. N; 206.324.1126

FILM
Seattle International Film Festival
5/16–6/9
It’s still too early to grab your copy of the free SIFF guide and circle everything you want to see (mark your calendars: the schedule is announced May 1), and it’s definitely too late to start working on a time machine that would allow you to turn back the clock so that you can see two films slated for the same time, the bane of overscheduled SIFF addicts. You know the drill: close to 300 features, plus shorts packages and special events ranging from celebrity appearances to virtual-reality showcases, teen filmmakers’ work to gala parties. Times, prices and venues vary. 206.464.5830; siff.net The Purple One at his 1984 birthday concert at Minneapolis nightclub, First Avenue. Photo by Nancy Bundt

EXHIBITIONS
Prince from Minneapolis
4/6–1/5/2020
Is there a better subject to decorate the funky galleries of the Museum of Pop Culture (MoPop)—a nexus of pop culture, style, music and creativity—than Prince, an artist that embodied the same characteristics? Featuring interpretive fan art (including Prince-inspired bicycles, dolls and blown-glass figures), instruments, costumes, photographs and more, this is a heartfelt love letter to the gone-too-soon “Purple One.” (While you’re there, pay your respects to Prince’s instrument of choice at the museum’s new guitar gallery, which displays axes from the likes of Carrie Brownstein, Muddy Waters, Hank Williams and Nancy Wilson.) Times and prices vary. MoPop, Seattle Center, 325 Fifth Ave. N; 206.770.2700

MUSICAL THEATER
West Side Story
5/31–6/23
For a show that relies so heavily on dancing (Jerome Robbins’s choreography, to be specific, in the original production) to propel the plot, the 5th’s production tapped no less than Spectrum Dance Theater (see page 60 for more about that ensemble this season) to cover that department in this evergreen—and sadly, ever-relevant—musical tale of ethnic conflict and love that can’t quite overpower hate. It’s all intensified by the heart-tugging music of Leonard Bernstein, another innovator whose centennial is being recognized worldwide this season. Times and prices vary. 5th Avenue Theatre, downtown, 1308 Fifth Ave.; 206.625.1900 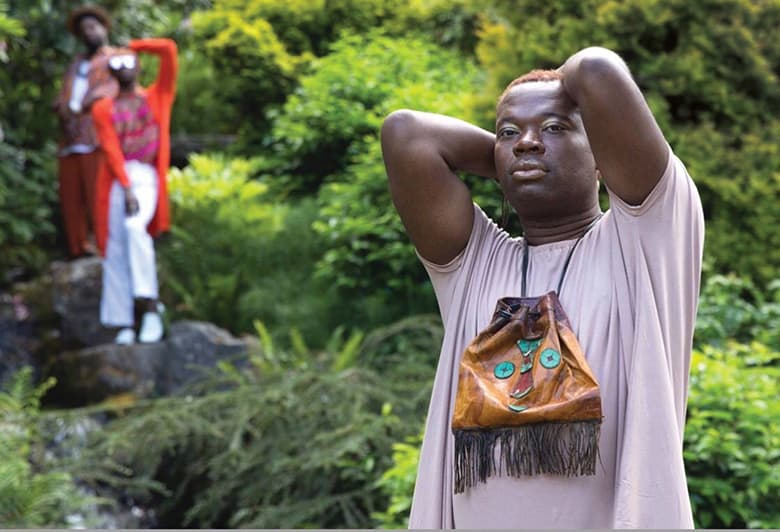 DANCE
Dani Tirrell
5/16–5/18
Don’t let the provocative title of Tirrell’s new work—FagGod—keep you away. Tirrell is the fearless Seattle choreographer whose 2018 sold-out On the Boards run of Black Bois, a meditation on the black experience, was one of Seattle’s top performances of the year. As its name suggests, FagGod mines Tirrell’s queer identity and expression, transforming what at first seems an uneasy topic—homosexuality and the church—into a profoundly evolved thesis about the places, Tirrell explains, where “the LGBTQIA+ community found sanctuary [at] the beginning of the HIV/AIDS epidemic…the discos, bathhouses and churches where many people…were able to be themselves.” Tirrell performs the work solo, accompanied by spoken word artists Naa Akua and Anastasia Renee. Times TBD. Prices vary. Langston Hughes Performing Arts Institute, Central District, 104 17th Ave. S; 206.684.4757 AUTHORS
Susan Choi
4/10
This Yale- and Cornell-educated former New Yorker fact checker and author, whose 2003 novel based on the kidnapping of Patty Hearst, American Woman, was shortlisted for the Pulitzer, reads from her new novel, Trust Exercise, about a young couple who fall deeply in love, and the forces of the world that penetrate their romance. 7 p.m. Free. Elliott Bay Book Company, Capitol Hill, 1521 10th Ave.; 206.624.6600 OPERA
Carmen
5/4–5/19
It’s on the long side (think of the three-and-a-half-hour performance as getting your money’s worth), but otherwise Bizet’s earthy melodrama is the ideal opera for the novice. No matter how inexperienced you are with opera, you probably already know at least three of the tunes, and you’ll leave humming more; and the push-pull romance between the title character and Don Jose, the soldier she dangles on a string, will hold you in its grip just as he’s held in hers, leading to a punch-in-the-gut (or knife, to be exact) tragic climax. Times and prices vary. McCaw Hall, Seattle Center, 321 Mercer St.; 206.389.7676; seattleopera.org Spectrum Dance restages Shot, which premiered in 2017, during this season’s Wokeness Festival. Photo by Nate Waters