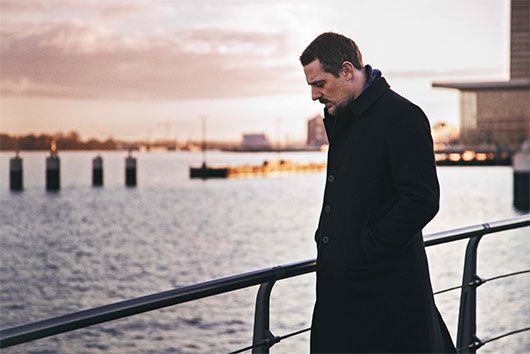 On Veterans Day, before a sold-out crowd at Seattle’s Paramount Theatre, the country-funk (funtry?) artist Sturgill Simpson abruptly had the house lights turned on.

“This is sort of surreal for myself. Never woulda thunk it,” said Simpson, a native Kentuckian who lived in Everett for a short while after a stint in the Navy, and is not prone to banter.

Simpson’s other local connection is a reverence for Nirvana in general and Kurt Cobain in particular. His latest album, the soulful A Sailor’s Guide to Earth, includes a wildly imaginative cover of “In Bloom,” with a robust horn section buoying the back half of the song into a boogie-woogie froth. But in the 45 minutes before the lights came on, Simpson and his large band—three horns and an organ augmenting a more standard quartet, with the brilliant Estonian guitarist Laur Joamets admirably subjugating himself for the good of the collective—stuck exclusively to tunes from Simpson’s back catalog, which hews a lot closer to an Appalachian sound than the Memphis-Motown cross-section found on Sailor’s Guide.

With a pair of spear- and pitchfork-wielding skeletons on the curtain behind them, they kicked off with the speedy bluegrass stomper “Railroad of Sin” before delving into the swampy psychedelia of “Turtles All the Way Down” and “It Ain’t All Flowers.” There were also sparer ballads like “Just Let Go” and “The Promise,” the latter of which is a dramatically stripped down version of When in Rome’s synth-pop original.

Sailor’s Guide is a collection of nine inseparable songs loosely centered on the theme of fatherhood; on the album, the background music never completely fades away. And after the lights went back down, Simpson played the entire LP straight through, highlighted by “Keep It Between the Lines,” “Sea Stories,” the aforementioned “In Bloom,” and the kiss-punch odd coupling of “Oh Sarah” and “Call to Arms” to close out the show.

The last song, which lathered up a crowd that hadn’t had a beer since 9:30 (a perplexing cutoff time, especially on the Friday after Trump’s election), seemed to go on forever, negating the need for an encore. Maybe Simpson wanted Kurt to hear it from his perch in the highest row, and maybe he succeeded.