If you like your dinner theater intimate, sexy and delicious, give into the charms of 'French Kiss' 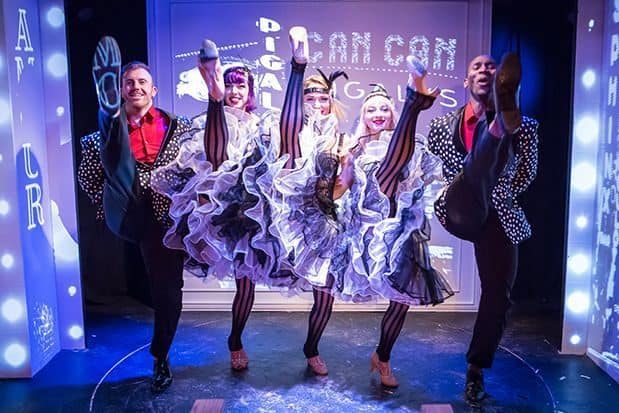 It’s always fun to watch Seattlelites (who have the reputation for being overly literate and passive) lose their minds during a performance. Such was the case on the opening night of the Can Can’s latest burlesque production, French Kiss. There’s much to recommend about the show, but here are three really good reasons you should go.

The Cast: All of the cast members are elegant and cool, while being hot and lust-worthy at the same time. (To wit: the night I attended, an audience member shouted to one performer: “You are so f#%@ing handsome. Stop it!”)

The scantily clad ensemble skillfully performs classic, modern, ballroom, cabaret and burlesque dance throughout three acts. They go by such titillating monikers as: Fiona Minx, Neon Keon, Baby Kate, Dapper Dave, Sugar Shay and Fair Elise (probably not their real names)—all led by the incomparable, charming Jonathan Betchtel (his real name). Betchtel keeps the action moving as the witty, and crowd-taming emcee, before bringing it all home with an impressive aerial act in Act III.

The Food: Chef John Gilbert serves up a palate-pleasing three-course dinner menu throughout the evening. It’s like a “having a cigarette” in between “acts.” I have no idea how he made roasted the apples in the Honey Crisp Apple Salad taste like bacon, but he did.

The Space: Artistic director and Can Can founder Chris Pink took over the space (in the century-old Corner Market Building of the Historic Pike Place Market) from Seattle Legend, Patty Summers, in 2005 after she had operated Patty Summer’s Cabaret for over 21 years with her husband Gary Steele. One of the many ways he’s made the space unique is by building a catwalk in the center of the room, which stretches the length of the entire theater leading to the stage. On either side of the walkway he’s placed members of the audience. This means that lucky members of the crowd always have a front row seat and are just a few feet, sometimes inches, away from the performers in various states of dress. Even if you’re in the back of the house, the cast will see, seduce or even bring you onstage. You can hide but you can’t run.

Kudos to the creative team: Fae Pink (choreographer), Jonathan Betchtel (production manager/principal host) and T.J. Davis (scenic projection designer), who give the people want they want and have created an evening of aesthetic delights. If you like your dinner theater intimate, sexy and delicious, give into the charms of French Kiss.