Throwback Thursday: A History of Protests in Seattle

Seattleites taking it to the streets is no new phenomenon 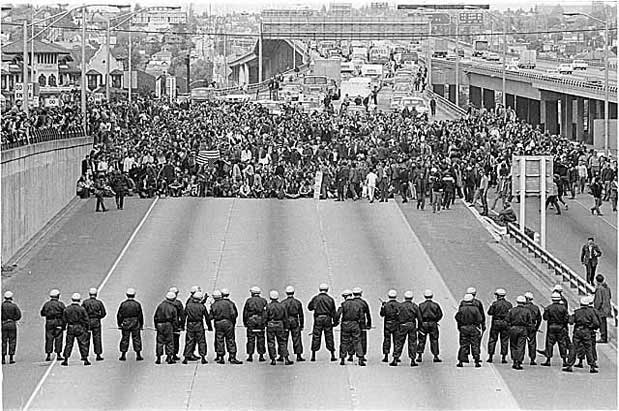 Being a city widely known for its laid-back, laissez-faire attitude, our penchant for protesting might come as a surprise to some. But in fact, riots and protests have long been a part of our city’s history.

Be it our location as a massive shipping port off the Pacific, diplomatic hub of the West Coast, or merely a place with a little edge in our blood, Seattle is a place where issues unfold, bringing expression about current events to the forefront of the world stage.

So while potentially passive on the surface, underneath lies people with conviction, formulated from a rich history of ancestors taking it to the streets in order to stand up for their rights. The first happened almost 104 years ago with The Seattle General Strike in February 1919. What followed were protests, riots and demonstrations that if anything, showed the significance of events happening in that moment in time. It seems grit was in the fabric of our people long before grunge was born. Here’s a look at some of the defining riots in Seattle’s history. Strikers gather groceries as the Strike begins. Photo Webster and Stevens Collection, Museum of History and Industry.
This five-day work haitus was the first city-wide labor action in America to be proclaimed a “general strike.” On the morning of February 6, 1919, 350,000 people in the Seattle shipyard stopped work, after not receiving their post-WWI pay increase following years of strict wage controls. This event drew headlines around the world, sparking a turbulent period of post-war labor conflict in the nation’s coal, steal and meatpacking industries. The Everett Massacre, also known as The Wobblies Protest and Bloody Sunday. Photo courtesy Everett Public Library.
Also known as The Everett Massacre, this was an armed confrontation between police and the Industrial Workers of the World Union, known as “The Wobblies.” In this shootout, two men were killed and 16 to 20 others wounded, marking rising tensions in war-era labor conflicts in the Northwest. University of Washington Students march in I-5, shutting down the Interstate after Kent State Shootings.  Photo courtesy of MOHAI
On May 5, 1970, after four Kent State University (in Kent, Ohio) students were shot in an anti-Vietnam war protest, the aftermath was felt across the country. Thousands of UW Students marched down the I-5 corridor, causing its closure. Although riot police were in presence, this event resulted in no injuries or arrests. Protesters warding off gas from Riot police. Photo Rob Mar The Seattle Times
The meeting of world leaders over a three-day period in 1999 was a turbulent period in Seattle. An estimated 40,000 demonstrated in the city, resulting in vandalism, arrests and the resignation of Seattle Police Chief Norm Stamper a shortly thereafter. Demonstrators camped out in the Westlake Park area of Seattle to protest economic reform, calling awareness to the “99 percent.” Photo WikiCommons.
A national movement aiming for economic reform for “the 99 percent” took form on a local level over the course of several days in the Westlake Park area of Seattle in 2011. Dozens of arrests were made, as demonstrators set up camp in “tent cities” in the surrounding area. Among other things, this reform aimed at big banks posed questions about the legality of protestors sleeping in public spaces.