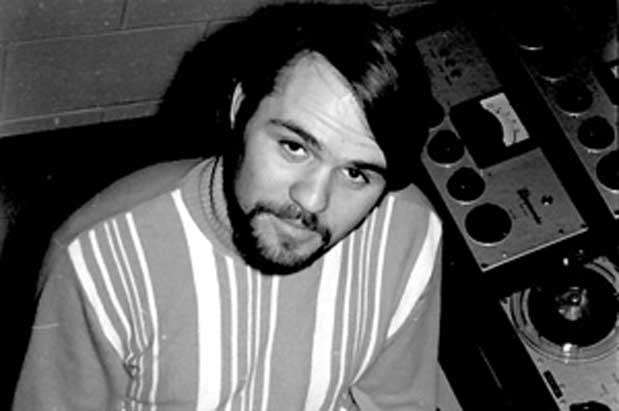 When Nirvana finished its first album Bleach  in 1988, lead singer and guitarist Kurt Cobain dropped the new 7-inch record off at the KEXP (then KCMU) radio station office for a listen. When the station played it on air, it was the first in the country to do so.

Thirty years later, the public station is still debuting major new artists: Macklemore, the Fleet Foxes, Death Cab for Cutie, the Lumineers, Phantogram and Arcade Fire to name a few. But long before KEXP was so recognized in the music community, it broadcasted at 10 watts from the University of Washington campus with a signal so faint it barely reached University Way, two streets away from campus. This Throwback Thursday we trace the station from its scrappy beginnings to its brand new Seattle Center home-in-the-making, which broke ground yesterday.

Launched in 1972, KCMU (named for the UW communications building where it was based) was the brainchild of a group of UW students inspired by student-run radio stations in the Bay Area and elsewhere. With almost no rules, these early DJs broadcasted “an eclectic range of programming,” according to co-founder Brent Wilcox. It was a free form, play-what-you-want approach that “built the foundation for what we do now,” John Richards, KEXP associate program director and morning show host, says. (The founders also attached the first transmitter to McMahon Hall by hand themselves, Wilcox told the UW Alumni Association, “one very cold morning.”) During the 1980s, KCMU’s signal expanded beyond the University District, and university budget cuts required the station to seek public support to continue. It got it and in 1986, moved to its current dial at 90.3. It also relocated its transmitter to Capitol Hill and raised its power to 400 watts. Its new range was 15 miles.

The station really took off during its second and third decades: Volunteer student-musician DJs broadened its modern rock programming to include hip hop, roots and blues, world music, reggae, jazz and more, responding to what was happening in the city at the time. In the ‘90s, KCMU hired its first three paid DJs, including Richards, who had started volunteering there as a UW student. This consistency among staff also racheted up the station’s quality. “The spirit of this place is: ‘We have to be on this,'” Richards says. From championing local hip hop to world music to alt country, the station’s DJs have always played “what they thought needed to be heard.”

“In the ‘90s, when this grunge thing happened, KCMU was the station,” he says. “It’s a station where musicians can drop off music and people will take chances on it,” he adds–where “taste-making DJs” skillfully balance quality, new music with strong, established material.

KCMU became KEXP (in honor of its experimental nature and new partnership with Seattle Center’s Experience Music Project) in 2001 and thanks to a 3 million dollar seed gift from Paul Allen, moved to its current location just off the corner of Dexter and Denny. Distributed over three years, Allen’s funding helped the station become financially self-reliant and significantly develop its programming in a much more technologically advanced studio. Today, KEXP-delivered services (including broadcast, online stream, website, blog, on-demand archive and podcasts) reach about 378,000 people per week and the station’s YouTube Channel reaches 686,000. KEXP has more than 500 in-studio performances per year and in 2004, the station earned the International Academy of Arts and Sciences’ Webby Award for the Best Radio Website that year. The station has outgrown its 6,000-square-foot South Lake Union office (now loaded with desks in the hallways) and is moving again: It broke ground yesterday on a new home on the corner of First Avenue and Republican, near the Vera Project and Key Arena. In the new 28,000-square-foot abode (some space leased to other businesses), KEXP will add a gathering space in the building’s center and a courtyard outside where live bands will play; laundry machines (one of many bands supporting the new home, Pearl Jam weighed in to request the machines must be industrial), cots and other services for visiting performers; and educational opportunities on the art of dee-jaying, production, video. KEXP will move in December.

KEXP is destined to keep growing, but it hasn’t forgotten its roots—or who brought it to where it is now. The listening public and the UW fund the station—though Richards notes that “no one has ever told us programmatically what to do.”

“The community is everything,” Richards says. “The listeners, the people who donate, the staff and volunteers here. I’ve never seen or heard or a community like this. From the mayor coming by, to the new home support we’ve seen, to the attendance at shows, to purchasing of music, to flying to festivals… our listeners do that. The only demographic we have is music lovers.” Lunice performs at a KEXP show at The Neptune; photo credit: Dave Lichterman