Time in a Bottle: Next Step in the Washington State Time Capsule is Here 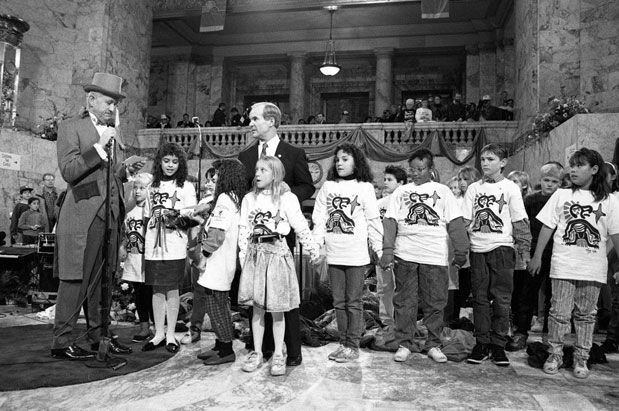 For 25 years, I’ve been waiting for the future. And it’s almost here. At least, the next step in a long chain of events leading to the year 2389 has arrived.

It all started in 1989, when Washington celebrated its centennial of statehood and I was hired by the state’s Centennial Commission to come up with a time capsule to commemorate the event and engage the public imagination. I had researched and written about time capsules, and had noticed a couple of things. For one, they often get lost. People make a big to-do about them, but 50 years later, no one can find them. This actually happened with two Washington time capsules in 1953: One capsule is somewhere underground near the Capitol, unmarked because the Legislature failed to vote for funding to do so; a companion capsule was lost in a basement for decades. Another problem: Time capsules only offer small snapshots in time. What if they could be updated to offer more of a panorama? The pace of change and technology is such that after 25 years in the ground, a time capsule is already out of date. What if you could add stuff later without compromising the original capsule?

I convened a committee to help me figure out the best way to avoid these pitfalls, and here’s what we came up with: a time capsule that wouldn’t be buried, but would “hide” in plain sight, too big to move or ignore, and one that would be watched over by people specifically charged with protecting and updating it. So, in 1989, I convinced the folks at Westinghouse, then a Hanford contractor, to build a honeycomb of 16 steel time capsules. We then stored them in a giant, locked data safe in the rotunda of the Capitol with the plan that every 25 years, the safe would be opened and the next capsule in the sequence would be filled. (This year’s will be the first update.) We recruited a few hundred children, age 10, most with birth dates on or near the state’s own birthday of November 11, to be official Keepers of the Capsule. We swore them in at a public ceremony on that day in 1989, and they pledged to return this year to fill the next capsule and swear in a new generation of Keepers.

We packed the original capsule with stuff that seemed so modern back in ’89: a Nordstrom catalog, some CD-ROM discs (remember Microsoft Bookshelf?), a Centennial banner carried into space by Washington astronaut Bonnie Dunbar, an Indian basket, a silver Boeing 747 pin, a license plate dated “2389”—presumably it can be attached to a fusion-powered flying car.
We also included more than 10,000 messages from ordinary Washingtonians sharing their stories, hopes and dreams. These were put on microfilm, thought to be the surest way—short of clay tablets—to store compressed information for 400 years. Technology is tricky: Could you play those old Microsoft CD-ROMs on your computer now? What would someone make of a Surface tablet if they found one in 375 years? The capsule contents are a mix of technology, written and digital documents, and small artifacts.

The Secretary of State’s office tried to keep track of the Keepers, tough to do over a quarter-century that could have taken these people from grade school to parenthood (especially since the group formed before email, Facebook and smartphones changed the way we find each other). Of the original 300 or so Keepers, about 80 were located, and a core group of them are steering the process. On November 11, 2014, a new generation of Keepers will be sworn in. They will repeat the process in 2039, and so on.
The Keepers are now deciding what to include for this go-around. A Kindle loaded with the works of Washington authors? A Seahawks Super Bowl ring? Some DNA samples? What small objects reflect life in our state in 2014 and will be meaningful to people centuries from now? Potential Keepers are being recruited from the ranks of 10-year-olds born in November. Hopefully, they will be representative of the state’s diversity. Washingtonians are again being asked to write messages—this time, they can submit them via email (message2389@sos.wa.gov), or the old-fashioned way, on paper. Handwritten documents from our era will likely be rare in the future.

People sometimes have asked if I wish I could be there in 2389 to see all 16 time capsules opened. The answer is yes, but it doesn’t compare with the privilege of being here at the beginning, watching this process unfold.