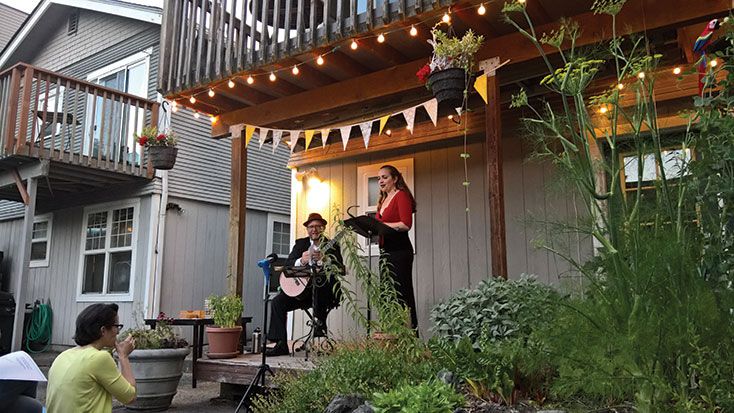 John Lennon’s aunt warned him, “The guitar’s all very well, John, but you’ll never make a living at it.” Making a living is tougher than ever in the streaming era, yet local musicians have found a way, via tech.

Two online organizations active in Seattle unite music lovers and makers: international Sofar Sounds (sofarsounds.com/seattle) and Boston-based Groupmuse (groupmuse.com). With Sofar (short for “Songs from a room”), people turn their home, office or rooftop into a venue. Seating is limited, tickets are pay-what-you-can, and locations and artists are kept secret until just before the show (recent surprise acts: indie faves Silversun Pickups and Iska Dhaaf). “With Sofar Sounds shows, you get paid $50 or a promotional video capturing one of your songs,” says Seattle’s Kris Orlowski, who has licensed music to TV’s Grey’s Anatomy and plays 68 concerts a year. “Living-room shows alone wouldn’t support me, but they can be a great way to connect with folks on off nights,” he says. “Sofar gives me a chance to make new fans and sell records/merch in other towns.”

Classically-oriented Groupmuse works similarly, says Seattle coordinator Emily Vomacka. “In two years, we’ve had 133 events for an audience of 2,363,” she says, with 10–50 folks at each event. “For the artists, it’s a square deal for a night’s work.” Hosts get a free party with exceptional music; attendees reserve their spot for $3 and pay musicians a minimum of $10. “Hosts have been kids in college, retirees and everyone in between,” says Vomacka. “It’s amazing what people can do with an open space and an audience.”