A Visit to KEXP’s New Headquarters at Seattle Center 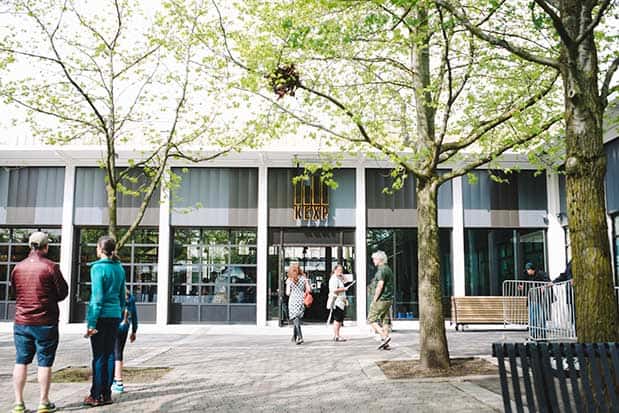 Last week, Seattle radio station KEXP 90.3 FM unveiled its new Seattle Center headquarters to the public at the corner of the former 1962 World’s Fair grounds where the remote Northwest Rooms had long been located.

On Friday, as I reclined listlessly on one of the very cushy chocolate-brown leather couches in the station’s new lobby (termed the “Gathering Space”), it seemed fitting that an institution with such a loyal and broad-based following would re-establish itself in a space designed for a greater degree of audience engagement.

White-haired British singer-songwriter Robyn Hitchcock serenaded the group of journalists, staff, donors, and a Nordic delegation of some kind on the small stage in front of the burnished clam-wood DJ booth. Young, smiling baristas produced espresso from the shining set of La Marzocca machines on a nearby pewter countertop.

The space is comfortable, spacious, utilitarian and unpretentious, like an airport lounge for first-class flyers, though not without a character befitting a Northwest alternative radio station.

These welcoming qualities extended to the dimly-lit private areas as well; an expanded DJ booth, live performance area, control room, and audio and video editing studios. In the facility’s cozy green room, I encountered Hitchcock leaving hastily with his guitar case in hand. He took a moment to point out the distressed leopard-print couch that had been at the station’s Dexter Avenue home for many years and expressed delight at the wallpaper with its printed grid of cassette tapes. 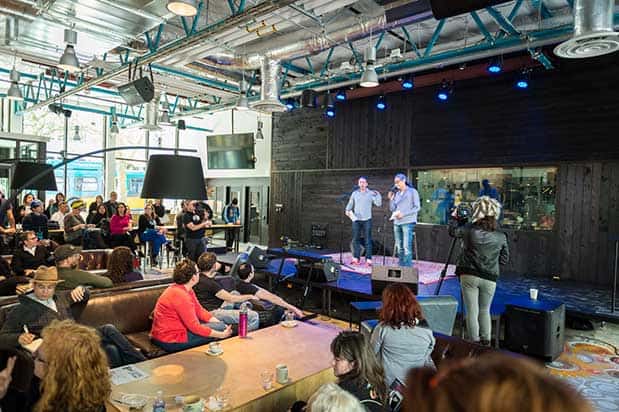 In the northwest corner of the facility, the music library lies beneath the sidewalk along First Avenue North, illuminated by natural light from the large windows above. Pedestrians outside have a view of the station’s vinyl stacks, which are placed on a series of high shelves along the wall. Here, Morning DJ John Richards pointed out the importance of opening up the Center’s fortress-like wall along the street with their new main entrance and these scenic windows.

DJ Kevin Cole spoke at length before the crowd.

He stated that that KEXP does not conceive of itself as a radio station so much as a non-profit arts organization, and that this idea has been the guiding principle behind SkB Architect’s design of the new facility. After spending some time wandering around the place, it became apparent that much care had been taken to provide ample work space for its 100 or so staff members. On the eastern end of the new complex, where the smaller Northwest Rooms once were, there is now a large open area with rows of desks and floor-ceiling windows that face out onto the courtyard across from Key Arena. Some of these are garage doors that can be rolled up on warm summer days. An ugly vinyl couch with foam emerging from a split seam along one of its cushions sat forlornly in the corner. Another heirloom from Dexter, according the ever-cheerful Richards.

My only reservation about the facility is that it may be too public for its own good.

Seattle is full of unknown recording artists who seek the recognition that airplay on KEXP might offer them. Does the station really want such people hovering around the darkened windows of the DJ booth or the glass doors along the courtyard holding their CDs in their hands? 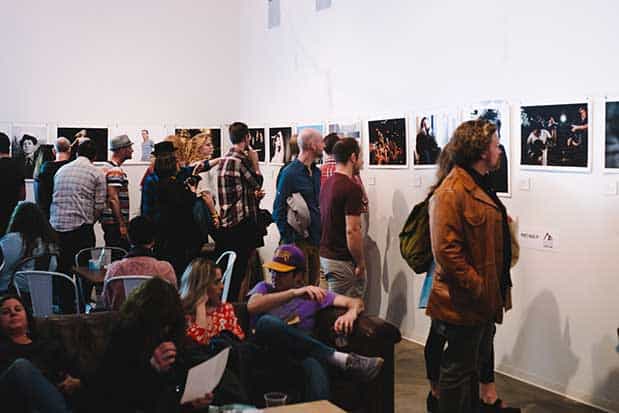 For those of us who grew up here, the Seattle Center has never quite lived up to its World’s Fair promise. It has, of course, been home to Bumbershoot and the Folklife Festival for two weekends a year. It is the site of Key Arena — the city’s major concert venue and former home of the now-defunct Seattle SuperSonics — and is circled by the buildings that house EMP, Seattle Opera, Pacific Northwest Ballet and Seattle Repertory Theatre. And tourists still flock to ascend the landmark that is the Space Needle.

But on any given afternoon, the interior has often felt empty and deserted. The addition of KEXP, along with organizations like SIFF and the neighboring Vera Project, with their respective audiences and constituents, have given the Center a new sense of purpose and vitality.