What’s in a Name? For EMP, now MoPOP: Everything 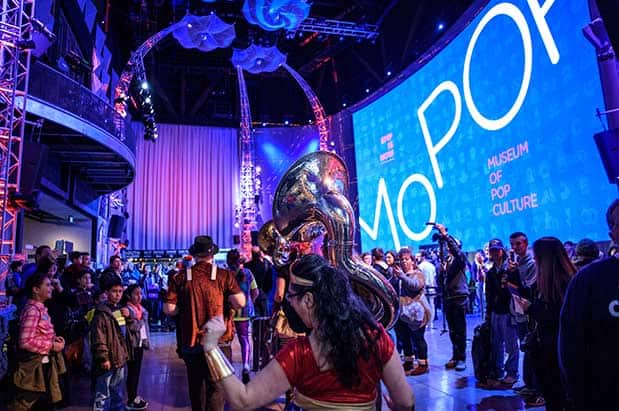 The marvelously metallic MoPOP (formerly EMP Museum), founded by Paul Allen in 2000 and designed by architect Frank Gehry, has played home to a host of noteworthy exhibitions and programs over the years, like traveling fashion shows and homages to Seattle bands.

In the nearly 17 years since its inception, the 140,000 square foot structure and Seattle Center landmark has rebranded with five different name changes, each attempting to more accurately reflect the focus and direction of the museum’s efforts (they are: the Experience Music Project, EMP, the Experience Music Project and Science Fiction Museum and Hall of Fame and most recently, EMP Museum).

Changing its name once more, on November 19th nearly 10,000 visitors, many clad in an array of costumes including wizards, Trekkies and paranormal-activity fighting Ghostbusters, gathered throughout the day to celebrate EMP’s latest label: the Museum of Pop Culture (MoPOP). Now under this very wide umbrella, the museum can showcase pop culture in all of its iterations, including sci-fi, fantasy, fashion, film, music and video games without appearing off-brand, as past exhibits on subjects from the Seahawks’ Cinderella story to the world of wearable art sometimes appeared.

“EMP has changed its name to the Museum of Pop Culture, or MoPOP, to better reflect how the museum has evolved and where it is headed,” says Anita Woo, Media and Communications Manager for the museum. “MoPOP is a continuation on the existing mission and goals that have grounded the museum. We will continue to bring genuine human experience and perspective to pop culture through our exhibits, programs and events that invite exploration and inspire creativity.” 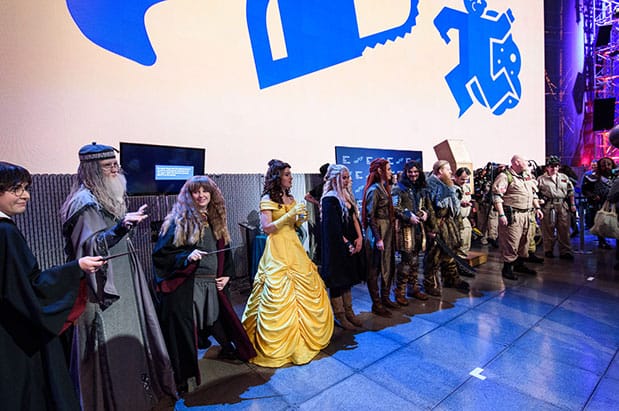 A celebration of pop culture in its many forms at the November 19th MoPOP party. Image Credit: Brady Harvey/MoPOP

In expanding its range of featured content, the 2017 exhibit schedule at MoPOP includes a wide array of programs: The Art of Rube Goldberg (which opens February 11), The Jim Henson Exhibition: Imagination Unlimited (May 20) and Starman Remembered: David Bowie (July 1). There will also be the unveiling of a new Science Fiction and Fantasy Hall of Fame gallery (March 4) that commemorates the genre’s most heralded creators and presents up-and-comers in horror film directing. This follows the event of the late January Science Fiction + Fantasy Short Film Festival, a team-up of MoPOP and SIFF, that showcases and awards these imaginative films.

It seems that, the fifth time around, the (former) EMP Museum is finally aligning with its true identity. It’s a coming-of-age moment for the museum that reflects the struggles, challenges and triumphs of the city at large, as booming Seattle moves forward in its identity as well.

“Seattle has a thriving, vibrant artistic community,” Woo says, “and whether it’s music, movies, science fiction, video games, or fashion, fans in our city are passionate about pop culture, and enjoy celebrating and connecting with other fans through these different genres.”