In Which We Take a Tour of Amazon’s Headquarters

What did you expect? Books?

When I heard that Amazon.com had started offering tours in Seattle, I couldn’t wait to sign up. After all, I had worked in the company’s modest 70 million-square-foot warehouse in Georgetown many years ago and was curious to see what it was doing with the small amount of extra space that used to be known as South Lake Union.

I imagined an action-packed adventure of a fulfillment center, or the excitement of a warehouse filled with random stuff. I worried about the likelihood of an overtired employee wandering zombie-like through the hallway and threatening to eat my brain.
Instead, there is office space.

And dogs. Lots of dogs.

At the Van Vorst Building (426 Terry Ave. N), I saw techies in their natural habitat, sitting in an easy-chair-filled lobby under posters celebrating Amazon’s early successes. There’s also a souvenir from a failure—an ice cave bear skeleton that was purchased on the long-gone Amazon Auctions. Plus, there were two of the 2,000 dogs registered to accompany their owners to work.

Guide Allison Flicker dispensed entertaining tidbits about Amazon’s corporate history during the hour-long walking tour that offered peeks into six buildings. Like the fact that every building is named after something significant from Amazon’s past, including the last name of the company’s first customer (Wainright) and the company’s first dog (Rufus).

My favorite stop was the Brazil Building, where each floor represents a country, with displays of local currency and items popular in that particular region. At a stop on one floor, Flicker took us to a room filled with free  advance copies of new releases.

Fresh from a free book high, I never saw the near-ambush by a little yappy dog as I floated down the hallway. A small fence and a fast-moving owner quickly thwarted the attack. 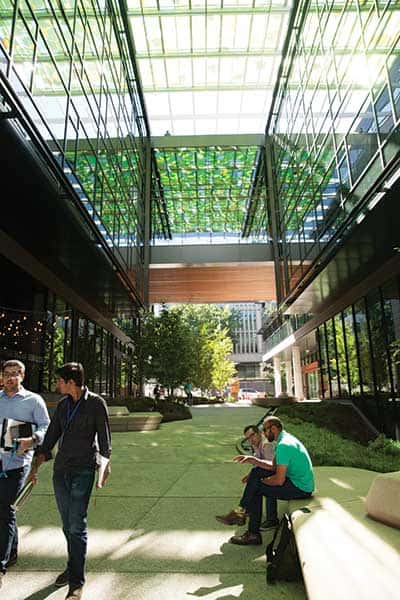 My trauma was soothed at our final stop in yet another building, where a demonstration of a robotic arm used in the distribution centers yielded more swag—a recharger and a selfie stick.

I even got a free banana from a bananista at the end of the tour, from Amaon’s year-round banana stand. What more could anyone ask for? Free. Ages 6 and older. amazonhqtours.com