Will the Political Finger-Pointing Intensify with more Bertha Problems? 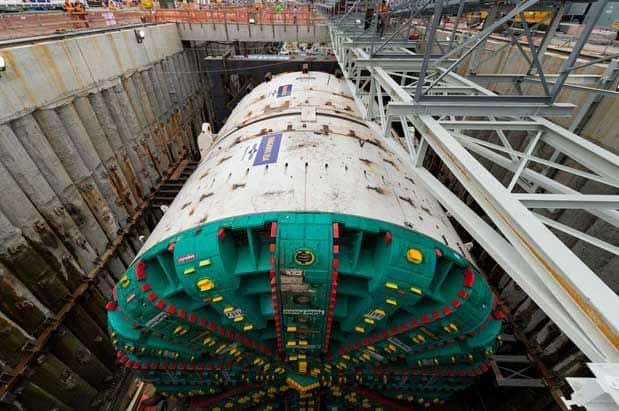 The downtown tunnel boring machine began inching its way forward on schedule in late December, but has encounter new difficulties: a sinkhole near the Alaskan Way Viaduct, a barge that dumped dirt from the tunnel into Elliott Bay and damaged a dock, concerns about the way the project is being managed. Last week, Gov. Jay Inslee weighed in and suspended work on the tunnel until the Washington Department of Transportation and the governor are satisfied that these difficulties are addressed and the safety of the Viaduct and public is ensured.

Bertha is about to tunnel under the tottering raised highway structure, which officials want to keep standing until the tunnel is complete. It would be ironic if the tunnel option that was sold on the basis that it would keep the Viaduct functional during construction wound up being the thing that shut or knocking it down permanently and prematurely. We were supposed to fear a quake, not Bertha.

For Bertha skeptics, it’s more of the same dynamic that’s seen completion of the tunnel delayed at least two years. For those who are all-in with the tunnel, it’s merely another bump—or sinkhole—in the road to a brand new waterfront. By hook or by crook, the tunnel will be finished, but how long will it take, how much will it cost, and who will pay for it. Lawyers are already at work on that—lifetime employment for them is at hand.

Historian David Williams reminds us that Seattle has done crazier things. Massive terra-forming projects are the historical norm for Seattle, and Bertha is small when compared to filling in the Duwamish tide flats, digging the Ship Canal, and hosing down Denny Hill.

Still, historical perspective gets you little when it’s your eggs that are being broken to make the omelette, to borrow a phrase attributed to the Mussolini. If, for example, you’re a Pioneer Square property owner and your building is sinking and cracking. Or you’re a waterfront business is struggling from seawall work and now further waterfront makeover delays are putting your future in jeopardy—have you actually tried to get to Ivar’s or Elliott’s these days? Or if you are a taxpayer who might get hit with overruns due to Bertha screw-ups or collateral damage to the transportation and utility infrastructure.

The political fallout will be interesting. In 2016, we have a governor’s race. Bertha is not popular around the state. Inslee would be advised to sort out what’s wrong with the management of the tunnel project. Since he’s ultimately in charge of WSDOT, he inherits the problem. His GOP opponent—probably former Seattle Port Commissioner Bill Bryant—would not be unwise to demand better accountability from the state. One shot already fired along these lines: former Republican state senator and two-time candidate for governor Dino Rossi said of the tunnel project “It’s clear, these folks couldn’t organize a kegger in a brewery.”

The political finger pointing will only intensify if Bertha can’t make real, untroubled progress soon. Boston engineering consultant Thomas Neff, who has been bearish on Bertha from the beginning, said in an email last week that sorting out the management and responsibility mess won’t be easy, however “For those not actually involved in the dilemma, it is entertaining, much like watching Donald Trump or Ben Carson trying to be presidential.”

We had hoped to get a tunnel, and we may still. We can expect more litigation. In the meantime, we could get more intense political theater.