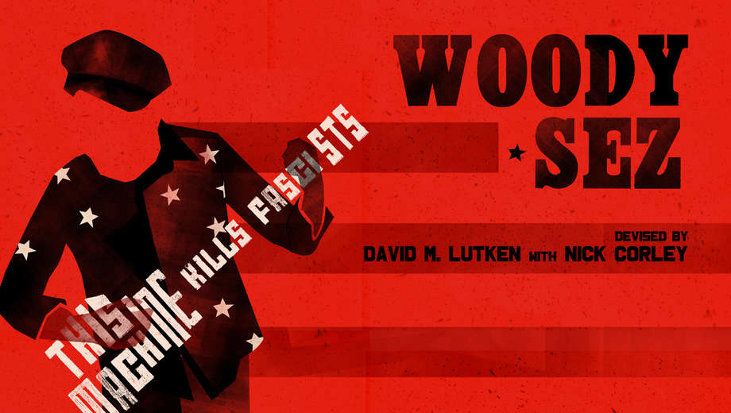 Three quarters of a century before Facebook and Twitter, Woody Guthrie was writing and singing songs about the complex issues we tweet incessantly about today: big banks, corporations, immigrants, the working class, greedy politicians, war. In David Lutken’s Woody Sez, the music-filled portrait of the life, times and songs of America’s folk-singing hero, Lutken, who wrote the script (with Nick Corley) and plays Guthrie, offers poignant commentary on the social media of the time—folk music—along with many subjects still relevant today.

During the Dustbowl and the Great Depression—Guthrie’s era—the best social currency was music: hootenannies and campfire jams, a way to forget the difficult hardships of life at the time. This we see rendered intimately on the Bagley stage though the production’s small, multi-talented cast—comprised of Lutken, Darcie Deavile, Helen Jean Russell and David Finch, all in a variety of roles—a scattering of sparse, mobile props, and a backdrop of a few iconic photos of Guthrie and the dust-caked Oklahoma prairie.

Lutken shines as the hardscrabble, hard travelin’ Guthrie, as the play loosely follows the songwriter’s life from boyhood to his final years in a New York city hospital, suffering from Huntington’s disease. Scenes and vignettes are fluid, woven together through rousing song, mostly adaptations and medleys of Guthrie’s famous folk anthems like “Pastures of Plenty” and “This Land Is Your Land,” along with other traditionals in the public domain.

The rollicking soundtrack and the instrumentation is impressive, with at least 11 acoustic string instruments, including a banjo, guitars of various sizes including a dobro, a handful of fiddles, the upright bass, an Appalachian dulcimer and an autoharp, all of which are played by rotating configurations of the cast, who we learn can not only act, sing and dance, but play, too. The authenticity this provides is noteworthy: there’s nothing canned or lip-synced about Woody Sez, which feels far more improvised, good-time campfire jam session than click track or timed to cue.

For all the rousing, familiar melodies (including last night’s encore of the official Washington state folk song, “Roll on Columbia,” which needed little prompting from Lutken to encourage a hearty audience sing along), the feeling that Guthrie’s life was strung together by a series of accidents, luck, misfortune, idealism, risk and happenstance is perhaps the culminating take away: expressed with tenderness and humor, we learn about a man like so many others—like me, you, them—and yet, having produced the so much of the American folk songbook, so different.

Woody Sez is a touching portrait of unity and togetherness, but also of the small seeds that sometimes sow revolution. Via Lutken’s portrayal, Guthrie came to understand the difference between “wanting something to change” and “wanting to change it” meant picking up the guitar and singing, his version of social media.

“This machine kills fascists, huh?” Guthrie is asked, late in the play, about the famous words scrawled on his guitar.

Today as then, his reply still rings true. “Yes. But you have to play it!”