Attack of the Foodie Tours 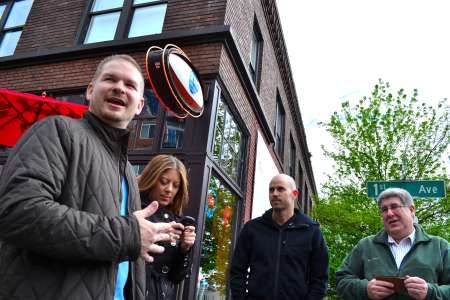 Now that it’s almost summer, spring is finally here. That means a new season of food tours that incorporate walking, eating, learning stuff, eating, more walking, and more eating. I tagged along last week on Seattle Food Tours‘ revamped Belltown Restaurant Tour, which in its third season has evolved from a snacky trek through Belltown that founder Michael Rogers says was too-much-walky, not-enough-eaty to more of a moveable feast wherein guests have scarfed down a complete five-course meal and a digestible amount of neighborhood history by the tour’s end.

We started out at Local 360 slurping down Eld Inlet oysters, known for their sweet richness, then followed up with a visit to bartender Phillip Trickey at Rob Roy, who was so enlightening in his demonstration of how to make a proper daiquiri (three basic ingredients, balanced with obsessive precision, and never, ever blended), I gained a brand-new respect for the normally abominated tiki bar mainstay. Next we hit Shiro’s Sushi Restaurant for a couple of bites of local snapper and Albacore nigiri while getting schooled on the history of sushi in Seattle as well as the proper Japanese techniques of sushi consumption. A mouthwatering primi pasta course of tagliatelle with rabbit and morels was served to us along with a Chianti wine pairing at Branzino, where we got some extended tableside time from owner Michael Don Rico. The main course, and really the only ho-hum leg of the meal, was at Ventana. The Alaskan troll king salmon served over cauliflower puree with kohlrabi, roasted Chinese eggplant, chorizo cream and citrus vinaigrette was kind of confusing, but hey—it’s a food tour, not an anniversary dinner. Lastly, it was a real treat to close it all out by enjoying the gastronomic experimentations of Spur with a corn and peach ice cream with candied hazelnut sprinkles and blueberries. Keep in mind the dishes served on the tour are always changing; even your guide may not know ahead of time what the kitchens have in store.

Rogers typically gets more out-of-towners than locals on his tours, but it’s a fun way to shake up a typical evening out for $69—trying restaurants you’ve never checked out before and getting plenty of special attention, meeting new people and learning about your home turf. As a Seattle native and local history buff, I was pleasantly surprised to learn details about Belltown I never knew, like the hows and whys behind the neighborhood becoming a regional silent film exchange in the 1910s.

Savor Seattle has a couple of new tours in the works as well, though I haven’t had the opportunity to report on them first-hand. The Craving Capitol Hill Tour explores another burgeoning restaurant scene and focuses on the ethnic diversity of the food offerings. Tour founder Angela Shen also assures me of some well-placed hipster jokes. Stops include traditional Indian sweets at Travelers Tea Company, Asian fusion at Kiki Tap & Eatery, Eltana Bagel Cafe‘s Montreal-style bagels and a coffee cupping at Victrola. Cost is normally $59, but they’re running a $49 special for the next month.

The walking is replaced by kayaking in Savor’s new San Juan Islands Gourmet Kayak Tour ($799), a three-day, two-night camping excursion. No big-name chefs or restaurants here—just an ingredient list that gives lots of love to local purveyors and tour leaders who can execute some fancy outdoor cookery like Vietnamese salad with meatballs, braised short ribs and rosemary olive oil cake with macerated fruit, take-home recipes included. Dinners are paired with Washington wines, of course. Plus, guests are asked to bring a bottle from home with a story behind it to share with the group in order to make the social lubricant more, uh, lubricating.