Cocktail of the Month: A Perfect Drink for Fall at Black Cat Bar in Belltown 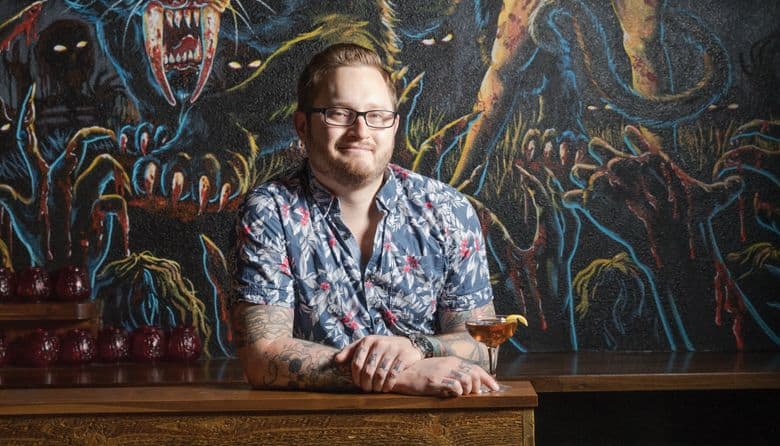 The History: In today’s spirits world, brandy is one of those tipples farthest out of the spotlight. And within the brandy family, Calvados, an apple brandy, takes a back seat to most of the others. Originating back in the 1500s in the Normandy region of France, Calvados is made from apples pressed into juice, which is then fermented into cider, distilled and then aged for at least two years in oak. While the personality of each Calvados differs according to brand and bottling, fruit, place of origin, time spent aging and other factors, an overall apple essence flows through all Calvados. It’s usually accompanied by an unfolding array of spice notes that transport you to the depths of the forest. The brandy’s complexity and subtle flavoring caught the attention of Dustin Haarstad, owner of Black Cat (Belltown, 2132 First Ave.), who conducted some experimentation with Calvados-based cocktails during his three-plus years of bartending at Canon, where he was shaking until 2017, and where a number of Calvados choices are offered. One night while at Canon, he created a Calvados drink on the spot for a regular, christening the cocktail “A Rose in the Fall.” After some tweaking, he’s now put that drink on the Black Cat menu.

The Update: A Seattleite who has shaken at snazzy cocktail emporiums and who is a certified spirits professional of the United States Bartenders Guild (among other professional certifications), the amiable Haarstad also digs dive bars, music and literature. Black Cat combines those interests: You’ll find him chatting with patrons about cocktails, spirits, music and Hemingway. A mural painted by local tattoo artists covers one wall (the scene depicts a Sheena-esque woman with a four-eyed sabertooth fighting off zombies). The drinks menu offers approachable sippers, such as A Rose in the Fall, that take dive drinking to another level. Along with the Calvados, this cocktail contains Carpano Bianco vermouth, a light, floral choice with a slight sweetness; and Cardamaro, a rare and less bitter wine-based member of the Italian amaro family of digestifs, crafted using cardoon, blessed thistle and other, secret, botanicals. To round things off, Haarstad brings two very different bitters to the drink: classic aromatic Angostura bitters and the nutty Fee Brothers black walnut bitters. A fresh lemon peel provides the final note.

The Final Taste: A perfect drink for the autumnal season, A Rose in the Fall delivers confident tastes—apple, citrus and spices ranging from cardamom to delicate ginger, with an underlying firmness from the Calvados. Nothing is overpowering. In a way, the drink’s beauty reminds me of fall itself. It doesn’t jump out at you, like summer or winter, but slowly unfolds like the leaves falling to earth. There’s also a romantic side to this story (and a story always makes a cocktail taste better), as Haarstad named this for his girlfriend, Rose. A Rose in the Fall

Haarstad suggests either Boulard or Château du Breuil Calvados for this drink, but most varieties will work well. Check to see what your local liquor store carries. Luckily for us, Cardamaro has become widely available recently, as has Carpano Bianco vermouth (also be sure to try each solo, the latter over a couple of cubes of ice with a twist of lemon).
Cracked Ice
2 ounces Calvados
1/2 ounce Cardamaro
1/2 ounce Carpano Bianco vermouth
2 dashes Angostura bitters
2 dashes Fee Brothers Black Walnut
Bitters
Lemon peel for    garnish
Fill a mixing glass halfway full with cracked ice. Add the Calvados, Cardamaro, vermouth and bitters. Stir well.
Strain into a coupe glass. Garnish with lemon peel, being sure to express the peel’s oils over the drink.