How One Seattle Distillery Is Using Tea to Infuse Spirits

Plus: Which tea-infused spirits to try from Woodinville's Four Leaf Spirits, and two cocktail recipes for how to mix it all up 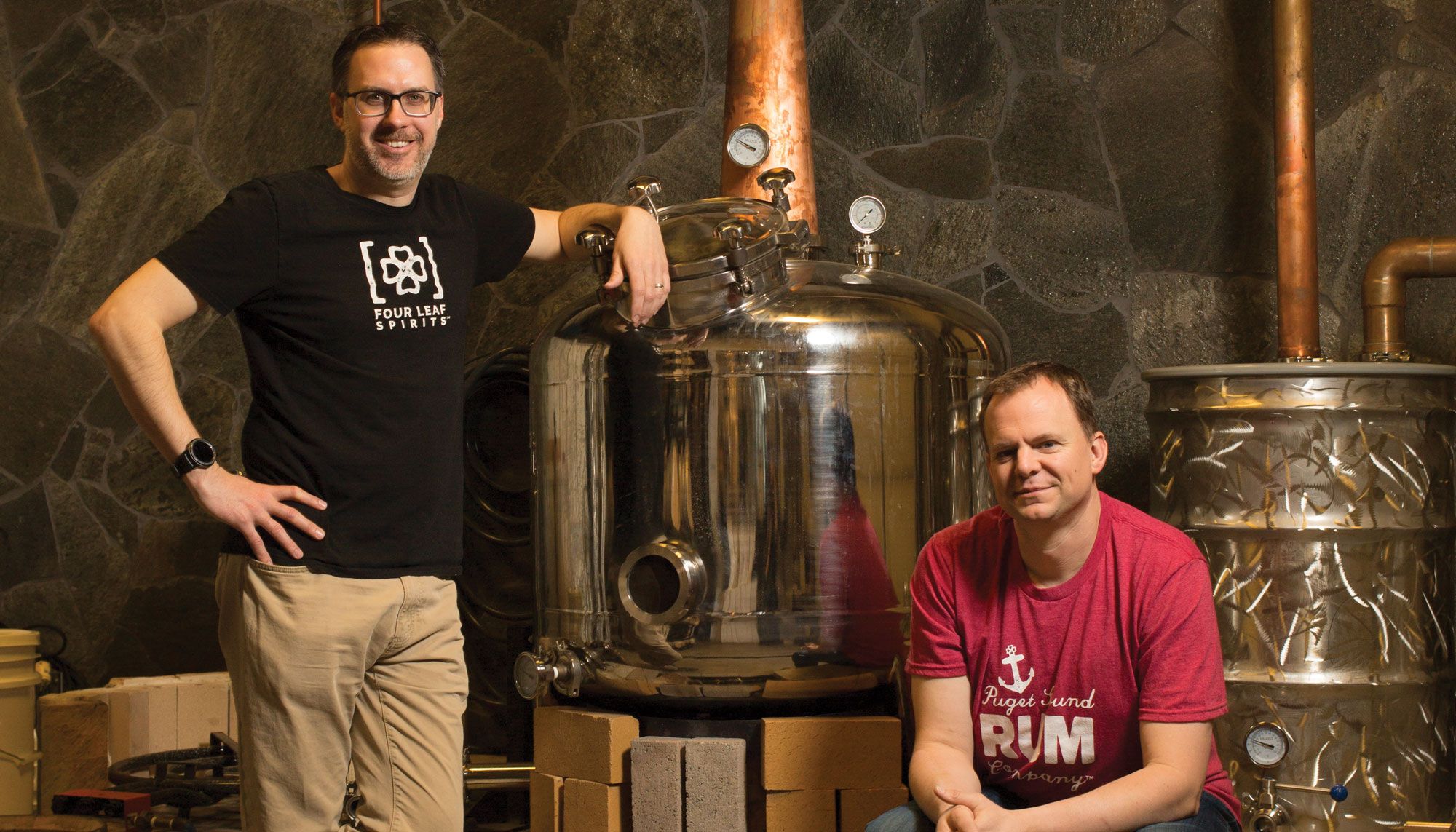 I’m a rarity in Seattle—someone who prefers tea to coffee, rarely missing a daily cuppa. Even so, my tea-in-cocktails experimentation has been limited to a tea toddy or two. But the line of tea-infused spirits and liqueurs from Woodinville’s Four Leaf Spirits makes it easy to create cocktails with tea.

The distillery started in 2015 as a project between two old friends, Tom Kelley and Matt McMullen (both of whom have engineering degrees and work in sales). Their tea-centric focus came from a situation similar to mine: Kelley is a tea drinker who often found himself ordering a little “something” alcoholic to add to his after-dinner herbal tea. They decided to make their own “something” by combining tea and alcohol in one bottle, creating Sásta, Four Leaf’s first herbal-tea-infused liqueur.

The name Sásta (pronounced SAW-stah) is an Irish word meaning “satisfied” or “content.” Both Kelley and McMullen are of Irish heritage, and all Four Leaf products carry Irish names. The name Four Leaf itself comes from the Irish good-luck charm, the four-leaf clover. And it was good luck—and the support of family and friends—that got them through some tough times, including, for both, the loss of a parent to cancer. That experience has led to them donate a portion of the proceeds from their sales to the Fred Hutchinson Cancer Research Center. They also like the idea that the name might bring good luck to others.

The friends procure their tea from Seattle’s Modern Steep Tea Company, a partnership that’s expanded their knowledge of tea. They currently produce three tea-infused products: two liqueurs and one spirit. The liqueurs are sweetened with local honey, instead of sugar.

Crafting tea infusions takes time to get the right flavors, allowing it to settle and then filtering it. But it’s time well spent to get the taste exactly right.
The two partners also craft rum under the Puget Sound Rum Company (PSRC) label. Kelley’s rum obsession goes back to his parents, too. His mother had celiac disease, so she stayed away from grain-based alcohol, sticking to sugarcane-based rum. She and his father also brought him intriguing Antiguan rums after vacationing there, which began his rum education that later broadened during his hours spent as a patron at Capitol Hill’s rum-centric Rumba.

PSRC regularly offers three rums: a white rum; an amber rum aged in barrels originally used for SoDo’s 2bar Spirits’ bourbon; and a honey-infused rum based on the traditional rum and honey liqueur called ron miel, from the Canary Islands. Plus, they recently released a limited-edition small-batch rum aged in casks first used to hold Woodinville Whiskey’s maple syrup; it’s the first in their Experimental Series. And since both guys love experimenting, there’s more on the way for lucky local drinkers—from both Four Leaf and PSRC.

Try these Four Leaf Spirits and Puget Sound Rum Company products
You’ll discover Four Leaf Spirits and PSRC tipples at a wide range of local bars, but if you want to tea up more seriously, your best bet is to visit the distillery (Woodinville, 12280 NE Woodinville Drive, Suite C; 425.320.4170; fourleafspirits.com; noon–4 p.m. Saturdays and Sundays, and by appointment). You’ll also find these products at Total Wine and More and other local liquor stores. When tasting, try each of them solo before getting adventuresome with cocktails and other drinks.

Sásta,  750-ml bottle, $35
The original Four Leaf Spirits tea-infused mix, Sásta cozies up to citrus, mint, chamomile and rooibos tea with a sugarcane spirit base and local honey. Smooth, subtle, orangey and herbal, with a hint of nuttiness, this liqueur isn’t as sweet as many liqueurs, and has a cuddly and approachable nature. The distillers love adding an ounce or an ounce and a half into a warm cup of chamomile tea—they call it “A Nap in a Cup.”

Tine, 750-ml bottle, $35
Bringing an exhilarating brace of spices into play from the first sniff, Tine (which is the Irish word for “fire,” and is pronounced TIN-uh) combines cardamom, ginger, pepper and rooibos tea into a cane sugar spirit base, and also uses honey as a sweetener. But its bright flavors aren’t pulled down by too much sweetness. Try it in the Megan’s Basement* cocktail, where it’s mixed with grapefruit juice and simple syrup.

Liath, 750-ml bottle, $32
A little bit of an English dream, Liath (Irish for “gray” and pronounced LEE-ah), is an Earl Grey tea–infused gin, bringing together two U.K. favorites. The juniper and botanicals from the gin are swirled with bergamot (Earl Grey tea is flavored with oil of bergamot), which adds a note of citrus. Liath, which has no added sweetener, makes a memorable sub for regular gin in a martini, and is delicious in the Afternoon Leaves*, a cousin of the martini.

Puget Sound Rum Company Amber Rum 47, 750-ml bottle, $39
Named “47” in honor of being fashioned at the 47th parallel, this rich and amiable amber rum is made from organic, unrefined Colombian cane sugar and aged for a year in barrels that previously held SoDo’s 2bar Spirits’ bourbon. It delivers lovely caramel and vanilla notes, which are dandy to sip solo or over a little ice, but also play well in cocktails like The Royal Woodinville Yacht Club*. In it, Amber 47 sets sail with local BroVo Spirits’ Lucky Falernum, Cointreau and lime juice.

Afternoon Leaves
The name of this drink leans more toward the time of day than the fall season, when we think about leaves falling. It’s best when afternoon is trailing away and evening is coming on, a time for tea in the U.K., which makes sense, as the drink is based on Woodinville’s Four Leaf Spirits’ Liath, an Earl Grey tea–infused gin. Here, Liath’s juniper, citrus and botanical notes match perfectly with Italian vermouth legend Carpano Bianco, which conveys its own citrusy, fruity, nutty, white-wine, mineral, light but full taste. This is a complex but so sip-able cocktail.

2. Strain into a cocktail glass. Garnish with the twist.

The Royal Woodinville Yacht Club
A direct descendant of tiki hero Trader Vic’s The Royal Bermuda Yacht Club drink, dating back to 1947, this cocktail switches the traditional tropical rum for Puget Sound Rum Company’s (the same folks who own Four Leaf Spirits) Jamaican-inspired Amber Rum 47. The amber rum’s caramel and vanilla notes pair with another Woodinville product, BroVo Spirits’ Lucky Falernum, a higher-proof Falernum bringing spice and fruit aboard. Cointreau and a smooch of lime juice round out the crew.

2. Strain through a fine strainer into a cocktail glass.

Find a recipe for Megan’s Basement at fourleafspirits.com