On Bainbridge Island, the Glenn family uses apples to produce gin and amari 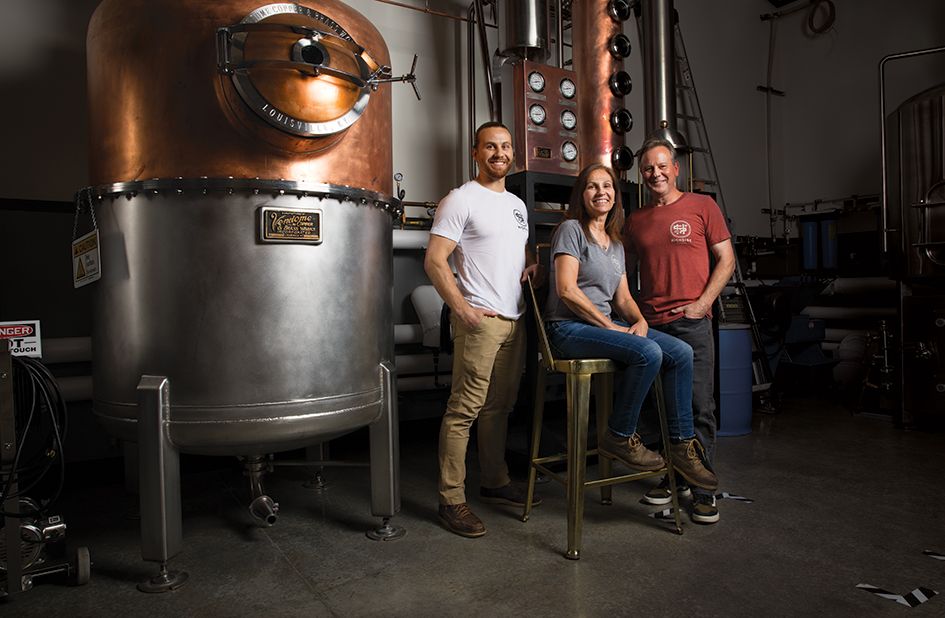 All photographs by Alex Crook

Jeff and Helen Glenn didn’t anticipate launching second careers when they decided to retire in 2012 and 2015 respectively: he from a career stretching back to the early days of IT, and she from years owning and operating a preschool. But when son Matt, a passionate home brewer, fell in love with whiskey—“essentially the next evolution of beer,” he calls it—after a distillery tour, he talked his parents out of retirement. Together, they opened Bainbridge’s Highside Distilling just after Thanksgiving last year.

Now, you’ll see all three Glenns running the tasting room, welcoming and serving visitors, and distilling. Like many local distillers, they’re driven by a passion for their product, not a desire to make a quick buck. As it took nearly two years from lease signing to the still’s first run—a timeline common for distillers—passion is a necessary ingredient. So is creativity, both in solving problems and for putting a distinctive stamp on products. At Highside, one way these qualities have manifested is in the use of Washington apples as a base for its gin, instead of the usual grain. It started when the Glenns made a batch of hard cider that fell short of the mark. They decided to distill it and voilà! As Matt says, “The resulting spirit was incredibly soft and smooth, and made a great canvas for the particular blend of botanicals we layered on top.”

That gin also serves as a base for two traditional Italian-inspired amari: Amaro Mele and Fernet Lario. In the past decade, cocktail buffs have fallen hard for amari, bitterish herbal spirits renowned for aiding digestion and balancing cocktails. The gin base brings a bouquet of 10 botanicals from the beginning, a different starting point than the neutral grain base traditionally used. The Glenns are experimenting with other amari, as well as a Campari-esque aperitivo, barrel-aged gins (including a “pink” gin that has been resting in a wine barrel previously used for Petit Syrah, and which may have been released by now), a brandy collaboration with neighbor Eagle Harbor Wine Co., and other projects. You can find Highside’s products at liquor stores and, of course, at their distillery.

The single malt whiskey that Matt originally fell in love with also is on the horizon (the distillery’s name refers to two areas of Scotland: the Highlands and one of its subregions, Speyside). Created using 100% Pacific Northwest barley and a treasured old Scotch ale home-brew recipe, Highside’s first whiskey was barreled in April 2019. It will be a few years yet before it’s whiskey-sipping time, but there’s no reason to put off a visit to the distillery to sample gin and amari in Highside’s lovely little tasting room. My guess is that you’ll find the whole Glenn family there. And, if you stay awhile, you’ll start to feel like family, too.