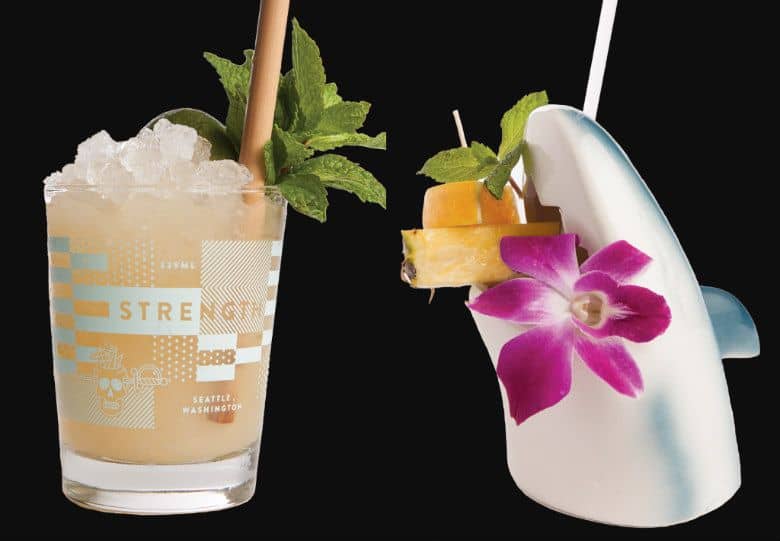 It could be our damp winters. Or that we’re a long way from tropical beaches. Or our many gray days. Whatever is driving it, Washington state residents can’t get enough of tiki. But where did this island drinking style come from?

After traveling through the South Pacific, Ernest Raymond Beaumont-Gantt (also known as Donn Beach) opened Don’s Beachcomber in Hollywood in 1934, soon after Prohibition’s end. The restaurant, later known as Don the Beachcomber, served Chinese food and delicious yet, at the time, unheard-of rum punches with exotic names. These were presented against the backdrop of a Polynesian-inspired décor, which many other bars, following in its footsteps, adopted and adapted: rattan and wicker furniture, fishing nets and floats, tropical fabrics, wooden masks and carvings and more.

One early imitator of this tiki style, as it became known, was Oakland’s Vic Bergeron, who opened Trader Vic’s. His bar became a big hit, and its first franchise opened in 1948 right here in Seattle on Fifth Avenue. It ran until 1992 (it was, interestingly, called The Outrigger until 1960). Another Trader Vic’s opened in Bellevue in 2006, but lasted only about two and a half years.

By the middle of the 20th century, Polynesian music, art and other aspects of the culture had become part of popular culture nationwide, and along with it came the strong, rum-packed, fruit-juice-based, colorful drinks as more bars followed Don’s and Vic’s leads, creating what we now think of as the classic tiki tipples. Then, in the ’80s, tiki drinks mutated into sugary dreck usually made from a mix.

But tiki culture—with its dress and decor—and the accompanying cocktails have made a comeback during our 21st-century cocktail revitalization, with a renewed appreciation for what makes the original island-inspired drinks so enchanting: first-rate rums and spirits, house-made mixers and fresh juice.

Start your tiki tour with a few of the classics from our favorite bars, then expand your escape with some lesser-known or new tiki treats. Sip them slowly, close your eyes and pretend for a moment that there’s sand between your toes and the sun shines overhead. 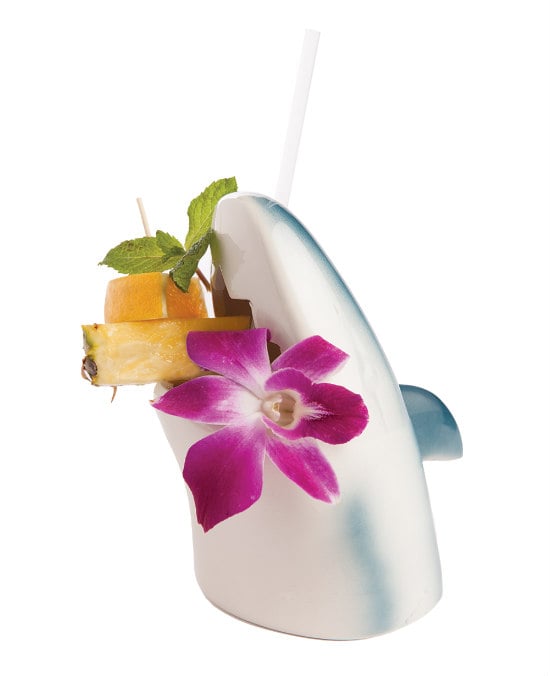 Painkiller at No Bones Beach Club

A tropical way to keep the pain away, according to old pirates, this drink was first mixed using Pusser’s rum by Daphne Henderson (owner and bartender) at the six-seat Soggy Dollar Bar at White Bay, British Virgin Islands, in the 1970s. But at this vegan food and tiki temple in Ballard, they use Whaler’s dark rum, which sails with coconut milk, orange juice and a healthy sprinkling of nutmeg. It’s a creamy treat with a spike of bright citrus and undertows of rich rum, served in a ceramic shark mug you won’t be able to resist taking a selfie with.

For the next round: While not exactly unusual or adventurous, this piña colada ($9) is worth every sip. It’s a blended beauty when made well, as it is here (and not so sugary that it would crack teeth). It’s also the national drink of Puerto Rico, as well as, of course, a key player in Rupert Holmes’ 1979 hit song “Escape.” At No Bones, the sweeter nature of this drink is balanced with a healthy splash of dark rum. Ballard, 5410 17th Ave. NW; 206.453.3233; nobonesbeachclub.com

Named after the Tahitian word for good, “maita’I,” the mai tai is the most famous of tiki cocktails. Its popularity has been helped, in part, by Angela Lansbury, whose character ordered many of them in the 1961 Elvis Presley movie Blue Hawaii. It’s also the most historically contentious tiki drink, as both Donn Beach and Vic Bergeron took credit for its origin. Seattle’s wonderful Navy Strength, owned by Chris and Anu Elford (Rob Roy, No Anchor), follows Trader Vic’s path, with Denizen rum, Pierre Ferrand orange curaçao, lime, house orgeat (an almond syrup) and mint. This mai tai is perfectly balanced, brightly flavored and graceful as a grass skirt.

For the next round: The Navy Strength Cocktail ($12) harks back to traditional tropical cocktails while marking its own trail, starting with Plantation Barbados five-year rum and Park VS cognac, both liquors washed with beeswax, giving the drink a singular lushness. To impart depth (and encourage the impulse to limbo), barbecued pineapple is added, along with angostura bitters and Bittermens Xocolatl Mole bitters. Belltown, 2505 Second Ave. (entrance on Wall Street); 206.420.7043; navystrengthseattle.com 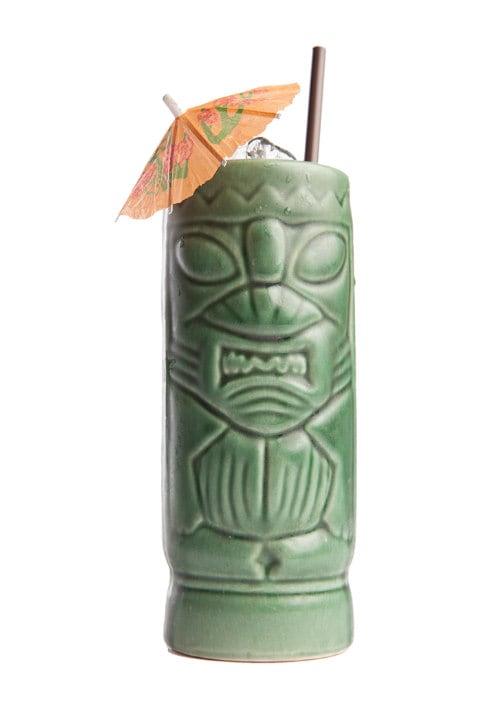 The Zombie at Bait Shop

The lore of this cocktail isn’t about the shambling undead, but rather refers to a hungover customer of Don the Beachcomber in 1934. After a couple of these, the man left, returning three days later to say he’d been turned into a zombie. Many spots still stop you after consuming two of these, including the Bait Shop, with its ’70s-garage-with-seaside-accent decor. Its version has three rums, highlighted by Hamilton’s full-bodied 151 Demerara overproof rum, plus grapefruit juice, angostura bitters, cinnamon, simple syrup and a hint of Pernod. While strong, it’s not bracing, blending citrus and herbal accents smoothly.

For the next round: Try the coconut lime rickey ($10). Though not necessarily a canonical tiki drink, the addition of lime at least has it glancing in that direction, and the rum and coconut bring it to the water’s edge. Light, tangy and a touch creamy, this drink follows up the headier Zombie in a lively manner. Capitol Hill, 606 Broadway E; 206.420.8742; baitshopseattle.com 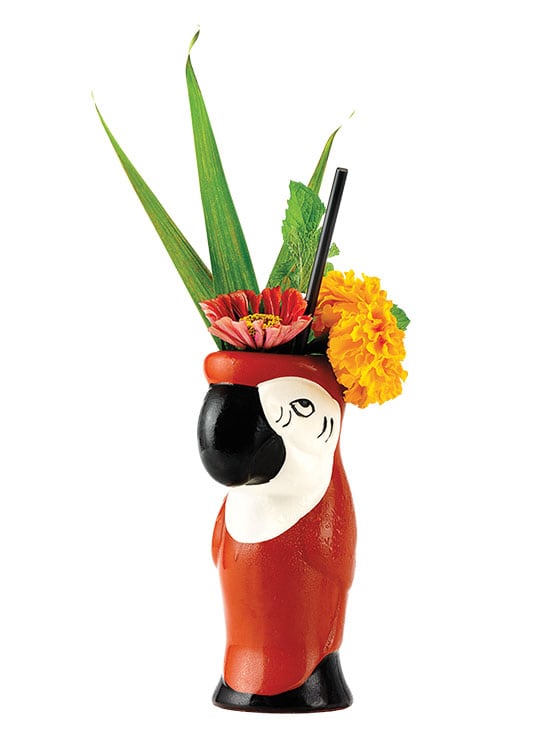 This bird didn’t fly far at first, after being hatched (as the tale goes) in the late 1970s at the Hilton’s Aviary Bar in Kuala Lumpur. But the Jungle Bird’s wings have spread, as bartenders fall in love with its tiki bona fides: pineapple, lime juice and in this instance, Cruzan’s earthy molasses-based black strap rum combined with Campari, a scarce beach-scene commodity. The latter mingles impeccably, adding fetching bitter accents, surrounded by the citrus and rum, all served in a ceramic parrot mug.

For the next round: Try the Howler Monkey ($11), an Albatross original, made with Smith and Cross rum, Clément rhum blanc (made from fresh sugar cane juice), Giffard’s banana liqueur, allspice dram, pineapple, lime and Peychaud’s and angostura bitters. Perfect for sipping on the seashore at dusk (the mingling of the rich rum and bitters is a better match with early evening than bright midday), this concoction is herbal but still gentle. Ballard, 2319 NW Market St.; 206.566.6181; hotelalbatross.com

The fogcutter is curious in that it takes rum, the long-established tiki standby, and adds both gin and cognac to the party (here, it’s Plantation rum, Citadel gin and Pierre Ferrand cognac)—and it works. Lemon, orange, orgeat and mint also come aboard for a refreshingly clear-sky feeling. Hot tip: Jason Alexander (owner and head bartender) is opening a second Tacoma tiki spot, the smaller and more grotto-like Devil’s Reef (706 Opera Alley) soon.

For the next round: The Jet Pilot ($12), which boasts rums from three Carribean nations: Barbados, Jamaica and Guyana, along with house-made Falernum (a lime and spice cordial), citrus and cinnamon. Tacoma, 728 Pacific Ave.; 253.222.4184; tacomacabana.com