The Nordic bar (with lots of aquavit) has finally opened 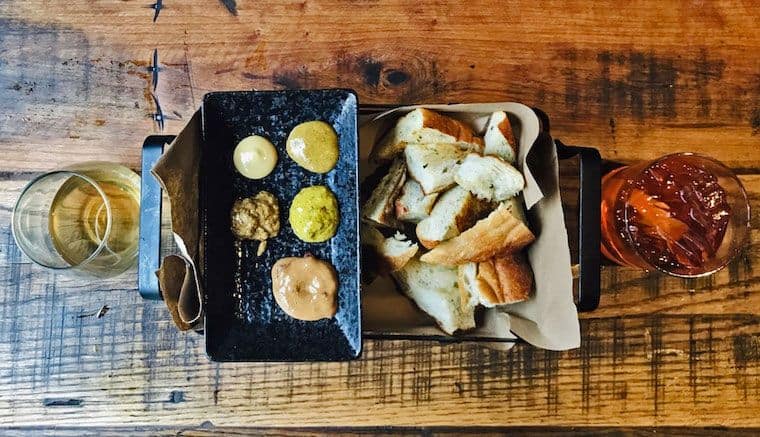 One of the year’s most anticipated openings, Skål (5429 Ballard Ave NW, past People’s Pub address), a Viking mead/beerhall-inspired spot, launched April 10. The journey to opening at times must have felt like the Vikings crossing a rough ocean, too. Not only is bringing any restaurant to life an adventure only for the hardy (especially when in an historic building, as here), but they had to overcome a crooked HVAC contractor heading out with payment, but without doing the work. However, like many intrepid Vikings, they persevered, and Skål has reached shore – and what a tasty shore it is.

Starting with – as I always like to – the drinks. With past Old Ballard Liquor Co. (OLBC) distiller and owner Lexi (who, like Prince, goes by one name) as executive chef, it’s no surprise there’s a swell local-and-Scandinavian-leaning beverage menu. I suggest going Viking-style and starting with some mead, made from fermenting honey, water and yeast. It is, as the menu says, the “Nectar of the Gods!” They have 10 options, and I picked Melchemy Juniper Pine mead, made outside of Carson, Washington, in small batches and barrel-aged—think pine notes on the nose, with a dry, forest-y taste and a light touch of sweetness.

You’ll find a host of beers on draft and in bottles and cans, including loads of locals, like the delicious Whitewall Cream Ale made in Marysville, as well as a growing list of intriguing and lesser-seen Nordic numbers from Denmark, Sweden and Norway. Wine and cider follow the same local-and-Nordic path, which provides an introduction to a few items mostly un-sipped so far in Seattle. But don’t overlook the cocktails and Snaps.

Six cocktail choices await, all of which use OLBC aquavits. A lesser-utilized cocktail base, slowly making inroads, aquavit can be hard to mix with, but they do an enticing job here, showing how it can be used in different situations. The Passive Aggressive, with OLBC Citron aquavit, sweet vermouth and Campari is a well-balanced Negroni sibling, layering an approachable sweetness-herbal-and-bitter combination. But don’t miss the Kon Tiki—a very rare tropical aquavit beer cocktail boasting OLBC’s classic caraway-forward aquavit, pineapple juice, passion fruit, orange juice, IPA and a splash of ginger beer. This refreshing, spice-and-fruit mixture delivers beach fantasies and full flavor.

Snaps are 1-ounce pours of aquavit to savor before or after a big feast. Skål has the deepest aquavit selection in-state I’m guessing, and perhaps as good as anywhere in the US, with lots of locals (including the full OLBC lineup, Edmonds’ Scratch distillery and more), and ones from Scandinavia and Oregon. If with a group, get a couple to compare and contrast.

You’ll want to balance out the drinks with food, and while Skål’s website says it’s drawing inspiration from a “Viking butcher shop” there are choices for all diets. The meat selection will make the more carnivorous drool, with the big roasted pork loin with bay leaves and the new-as-of-my-visit deep fried duck wings hits already. There are locally made sausages, including wild boar and venison varieties, tasting boards boasting a Pickled Herring 3 Way sure to be a success with Swedes, a few salads, some pleasant potted spreads (the cheddar and beer was creamy with a slight beer hint and reminded me in the best way of growing up Midwestern; the smoked mussel, gouda and scallion is another top spread I was told), and a whole bunch of bar bites. In the latter section, the Wild Fjord skewer set offers a true meat-on-a-stick moment.

Perhaps my favorite nibble, though, was the deceptively simple mustard tasting board. Soft, scrumptious potato bread accompanied by five different house-made mustards: whole grain, horseradish-dill, lingonberry, IPA Dijon and sweet malted spice. Each mustard had its own unique character, and while I finally ended up picking the sweet malted spice mustard as the mightiest (that yummy maltiness and spicy kick triumphed), it took much mustard mulling as all were delish.

Skål’s meadhall direction means loads of rustically-comfortable wood notes: tables and booths, floors and chairs. It’s broken up into two areas: the front, all ages until 8 p.m., and the back area, always 21-and-over. The back’s highlighted by a substantial U-shaped bar surrounded by tall bar chairs, a shuffleboard table (which I felt was, as well as being fun, a small shout-out to The Viking bar that used to bubble over with locals at the corner of 65th and 24th), an open fire above which protrudes a Viking figurehead, shelves with board games, big shareable booths and a picture of Erik the Red.

A few more Viking notes are up front including shields and a goat skin, plus the big street-facing window for those wanting to watch locals carousing down Old Ballard Ave. There are also a few notes to know about ordering: you pick a table, order at the front counter or the bar, get a number and they bring your drinks and food. You also bus your own tables, and there’s a water dispenser in the middle. It’s all a very friendly experience, with a nice and caretaking staff (highlighted by Lexi doing a bit of everything), and a jovially-rambunctious atmosphere that seems to bridge old Ballard and new. Wide and diverse crowds are already pouring in—Thor himself (who would love the whole place) might even need to arrive early to ensure he gets a seat!