Our favorite warm, savory noodle dishes from Chinatown and beyond. 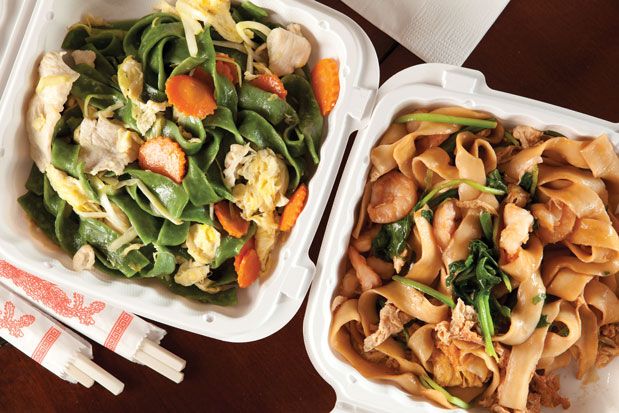 Taiwanese
Sesame Noodles
at Facing East in Bellevue
There’s something captivating about the toasted sesame flavor in the sesame noodles at Bellevue’s best-kept secret, Facing East. Unlike most sesame noodles, these are served hot, and the sauce is thick and creamy, like a sesame gravy, yet with an almost bitter counterpoint. It’s soothing, but still smart, comfort food. ($6.95

Thai
Pad Thai
at Little Uncle in Capitol Hill
Order online so that you can swing by this takeout-only Capitol Hill Thai spot and not have to pace out in the cold. Which is not to say that chefs Wiley Frank and Poncharee Kounpungchart’s limey, spicy, nutty pad thai isn’t worth a few minutes toughing it out in the weather, because it is. It really is. ($8.80) Chinese
Mi Vit Tiem (Braised Duck and Egg Noodles) Dry Style (shown above)
at Hue Ky Mi Gia in Chinatown-I.D.
Thin egg noodles from this Little Saigon restaurant, cooked to a firm finish, sit beneath assorted vegetables—baby bok choy, shiitake mushrooms, green onions—and the star: a five-spiced duck leg, its meat so tender it’s easily pulled off the bone using chopsticks. If you choose “dry style,” the simple but satisfying broth that would usually accompany the dish will be served alongside, so you can add a little if you choose. The best of both worlds. ($7.50) Korean/Fusion
Roasted duck, smoked tea noodle, pickled raisin and duck crackling (shown above)
at Revel in Fremont
Every noodle dish we’ve tried at Fremont’s Revel—including a basil noodle with clams, and a seaweed noodle with red curry and Dungeness—has been impressive. But holy smokes, the roasted duck is so good here. And the interplay of the smoked tea noodles and the barely there five spice seasoning, with the pickled sweetness of the raisins lifting it all up? Heaven. ($15) Cambodian
Mee Katang (shown above)
at Phnom Penh in Chinatown-International District
At this lovely, long-lived Chinatown-ID institution, we find ourselves ordering this soul-warming dish every time. Wide rice noodles, soft and slippery, arrive in a rich gravy with tender beef (or choose chicken or pork), alongside perfectly cooked Chinese broccoli, slivered carrots and shiitake mushrooms. ($7.95)

Chinese
‘Ants on a Tree’
at Seven Stars Pepper in Chinatown-International District
At this Little Saigon hot spot, the fine bean thread noodles (also called cellophane or glass noodles) in this classic Szechuan dish represent the “tree,” while the bits of minced pork that stick to the noodles are the “ants.” It’s a nearly sauceless dish; the soy-sesame sauce, with a decent hit of chile heat, is absorbed into the noodles. But the combination of the gelatinous noodle texture and the savory flavor make it an addictive one. ($8.50) Chinese
Customizable Noodle Soup (shown above)
at King Noodle in Chinatown-International District
There’s no set menu at this Chinatown-ID noodle house; instead, diners fill in a menu sheet—choosing the type of broth, noodles or wontons, and a preferred protein and vegetables. We like the pulled chicken in the spicy broth with chewy udon noodles, topped with leeks, mushrooms and cabbage, but brisket and duck are first-rate choices, too. In fact, it’s hard to go wrong. ($6.99) Thai
Kao Soi (Egg Noodle Curry) (shown above)
at Noodle Boat in Issaquah
An intoxicating saffron-hued coconut curry sauce, ringing with turmeric and ginger, arrives blanketing thin, firm egg noodles. On top: crispy noodles and crunchy cabbage, carrots and a nice smattering of cilantro. There’s good reason why many consider Issaquah’s Noodle Boat the Thai restaurant all others should be measured against. ($9.25)

Thai
Phad Kee Mao (also called Drunken Noodles)
at Spice Room in Columbia City
Extra-wide rice noodles entangled with softened peppers, still-crisp broccoli and your choice of protein (we like the fried tofu triangles, but the beef arrives tender and just right, too) are the hallmarks of this deeply comforting Thai dish. Spice Room’s Columbia City version is just right, and they do bring the spice if that’s how you like it. ($10.95)

Filipino
Pancit Stir-fried Noodle
at Kawali Grill in Columbia City
Pancit (pronounced pahn-SIT or pahn-SEET) literally means “noodle” in Filipino, and one of the numerous versions (every family restaurant has its own) of pancit is almost always served at Filipino birthdays and gatherings. In Columbia City, Kawali Grill’s version involves very fine rice noodles stir-fried in a calamansi-flavored soy sauce (the calamansi, or calamondin, is an orange-like citrus fruit native to the Philippine Islands) along with carrots, cabbage, mushrooms, tiny shrimp and small pieces of very delicious pork. ($7.99) Thai
Spicy Noodles (shown above)
at Naam Thai in Madrona
Wide rice noodles are fried in a hot wok along with your choice of meat (we like the beef at this Madrona spot) plus spinach, bean sprouts, eggs and sweet-hot chili sauce. The spice level of the dish is nice, but it never hurts to amp it up a little (three stars or higher) to keep things interesting. ($9.95)

Korean
Japchae
at Korean Tofu House in the University District
Wiggly sweet potato noodles, clear as glass, arrive entangled with scallions, shredded carrots and thinly sliced pork (or beef or tofu) in a light soy-sesame dressing. The dish at this University District establishment lands a little on the sweet side, so it’s best when punched up with a good dose of hot chili sauce. ($7.99)

Filipino includes pansit (also spelled pancit) bijon made with rice or corn flour; pansit canton made with wheat and egg; and pansit sotanghon, cellophane noodles, made with bean flour.

Japanese includes hiyamugi, kishimen, ramen and udon made with wheat; soba made with buckwheat; shirataki made with yam; and harusame made with potato flour and corn starch.