The Best Brewpub Dining in Seattle 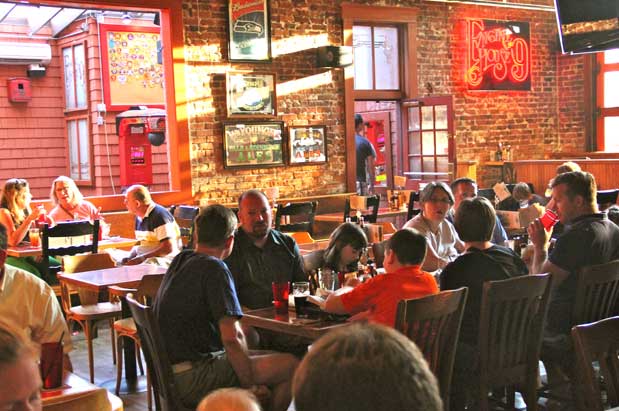 BALLARD
Jolly Roger Taproom
Maritime Pacific Brewing Company is Ballard’s oldest brewery, having opened in 1990 at a location just west of 15th Avenue, and its pub (the Jolly Roger Taproom) is a beloved fixture in the neighborhood. The décor is an obvious nod to Ballard’s maritime history, with just enough pirate flair to get the kids looking for Captain Jack Sparrow. You may not see Johnny Depp or discover any buried treasure, but you will find a large menu featuring salads, sandwiches and a few entrées, such as fresh Alaskan halibut and crab-stuffed prawns. The oyster sliders are a crowd favorite and pair especially well with a pint of Bosun’s black porter. If you’re there during the winter months (mid-October through March), be sure to order a Jolly Roger Christmas ale, one of Washington’s most treasured winter seasonal beers. Lunch and dinner daily. 1111 NW Ballard Way; 206.782.6181; maritimebrewery.com

BELLEVUE
Bellevue Brewing Company
Until late last December, there was a noticeable blank spot on the local beer map: Bellevue did not have a locally owned brewery to call its own. That all changed when Bellevue Brewing Company opened its expansive and austere brewpub in a light-industrial complex near Northup Way and immediately started brewing world-class beers to serve alongside a selection of salads, sandwiches and pizzas. It can be a bit tricky to find, but you’ll have no problems if you trust that it is in the building behind the much-easier-to-find Angelo’s. Once there, order up an oatmeal stout or ask about its seasonal specialty beers. This brewpub is a big hit with the after-work crowd, families and weekend beer tourists, and is especially popular with local soccer fans who come in to watch Sounders games on a huge HD television. Lunch and dinner daily. 1820 130th Ave. NE, Suite 2; 425.497.8686; bellevuebrewing.com

FREMONT
Hale’s Ales Brewery and Pub
If the word pub conjures thoughts of a traditional English public house and tweed jackets with leather-patched elbows, then the Hale’s Ales pub in Fremont will make a lot of sense to you, offering a comfortable and cozy Old World atmosphere and even a few sofas for relaxation. The restaurant side of the business (all ages) is a bit more straightforward, with tables and chairs in a brightly lit room. The menu is kid friendly and focuses on sandwiches, burgers and pizza, but whatever you order, consider adding a side of the Jo Jo potatoes, always a big hit with grownups and tykes alike. Hale’s Ales Brewery originally opened in 1983 (and has been in its current location since 1995), and the Hale’s American pale ale has remained largely unchanged over the course of all those years. If you favor something more robust, consider ordering a Wee Heavy winter ale (available November through January). Lunch and dinner daily. 4301 Leary Way NW; 206.782.0737; halesbrewery.com

GREENWOOD
Naked City Brewery and Taphouse
If you’re a fan of film noir, you’ve got something in common with head brewer Don Webb and you’ll appreciate the way he names his beers, lending each new creation a cinema-inspired name. A recent increase in brewing capacity means that Webb is now spreading his wings, creating new recipes and delving into new styles (look for some new Belgian-style beers soon), building on his reputation as one of Seattle’s top brewers. Expect to find burgers and sandwiches, but don’t miss the pickled hop shoots, which pair particularly well with a pint of Screening Room Red, whose namesake dining movie theater features heavy red velour curtains and a huge projection screen television. This one is rated G, so bring the kids along. Lunch Wed.–Sun, dinner daily. 8564 Greenwood Ave. N; 206.838.6299; nakedcitybrewing.com

MUKILTEO
Diamond Knot Brewery and Alehouse
You can always catch the next boat. That’s the theme at this brewpub on the Mukilteo waterfront, which is located, literally, right across the street from the ferry dock. A recent remodel increased the size of the dining room, which is now much larger and welcomes loads of natural light from west-facing windows overlooking the neighboring park. The kitchen and the menu have also been overhauled, though the 21-and-older pub side of the business remains largely unchanged. Along with the regular pub fare, the menu includes something rather uncommon: stone-grilled entrées. For this novel food service, a blistering hot cooking stone is delivered to the table with your raw food, such as the Hot Rock rib-eye, and you prepare it to your own liking. This brewery is widely known for its IPA, but consider ordering an ESB instead. Kids are welcome. Breakfast, lunch and dinner daily. 621 Front St.; 425.355.4488; diamondknot.com

OLYMPIA
Fish Tale Brew Pub
Located in an industrial part of downtown Olympia, the pub serves up a diverse menu of consistently high-quality fare, with plenty of vegetarian and organic options to supplement the usual pub grub. The brightly painted exterior (a mural with colorful salmon) is countered by a warm and cozy interior, which features a U-shaped bar and walls displaying local artwork. While some might despair that children are not allowed, others revel in the adults-only atmosphere as they hoist pints of Fish Brewing Company’s Reel Ales, a limited-release series of beers that can always be found at this pub. Lunch and dinner daily. 515 Jefferson St. SE; 360.943.3650; fishtalebrewpub.com

PIKE PLACE MARKET
Pike Pub & Brewery
Charles and Rose Ann Finkel, proprietors of the Pike Pub and Brewery, welcome visitors from around the world and across town to their spacious brewpub near Pike Place Market. Perhaps the most impressive thing here is the historic memorabilia that adorns the walls, much of which predates Prohibition, but the beer is awfully good, too. A full range of entrées complement more typical pub fare, and you’ll notice a relentless dedication to serving local products. Try the Kilted mac ’n’ cheese, made with local artisan cheeses and Pike’s own Kilt Lifter ale, which is also the best beer to drink as an accompaniment. All ages are welcome. Lunch and dinner daily. 1415 First Ave.; 206.622.6044; pikebrewing.com

PIONEER SQUARE
Keep an eye out for Allstadt, a new beer-focused spot coming to Pioneer Square from Brendan McGill, owner of Hitchcock. The old Larry’s night club
will be transformed into something reminiscent an authentic German beer hall, where you can wash down top-shelf bratwursts with first-rate brewskis.

SODO
Schooner Exact Brewing
Matt and Heather McClung have put a lot of thought into every aspect of their brewery, and now show their kitchen the same kind of attention. When they decided to add food to the menu at their spare, all-ages tasting room in SoDo’s warehouse district, they secured the services of Warren Peterson, former corporate sous chef and “beer czar” for Tom Douglas Restaurants. At first glance, the menu may look a bit predictable, with sandwiches and salads, but upon closer inspection you’ll realize that this is elevated pub grub, featuring creative combinations, fresh ingredients and house-made everything (see: the steak melt sandwich with Peterson’s chimichurri sauce). The champagne-shallot vinaigrette, featured on the side salad, is sublime. Pair any of the meals with a West Point pale ale and you cannot go wrong. Lunch and dinner daily. 3901 First Ave. S; 206.432.9734; schoonerexact.com

Epic Ales’ Gastropod
Good things come in small packages. Though the old adage isn’t always true, you’ll find inspired food paired with uncommonly creative beers at this rustic, warm and pint-size brewery and eatery in SoDo. Brewmaster Cody Morris has carved out a niche for himself by using uncommon ingredients to create unexpected flavors (who else uses shiitake mushrooms in a beer?) and by always considering how each new brew will pair with food. Chef Travis Kukull, formerly of Tilikum Place Café, creates whimsical, adventurous dishes that seem out of place in a brewpub, such as the rabbit and smoked salmon crépinette, but delight even the most passionate foodie. Be sure to try the Bog ale, which is the closest thing Epic Ales has to a flagship beer, and pair it with some cold-smoked oysters when they’re in season. Dinner Tue.–Sat. 3201 First Ave. S, Suite 104; 206.403.1228; gastropodsodo.com. 21 and older only.

SNOQUALMIE
Snoqualmie Falls Brewing & Taproom
Next time you take your out-of-town guests to see Snoqualmie Falls, stop by the brewpub sharing the same name. Located a block off the main drag in downtown Snoqualmie, this quaint little spot offers sandwiches, pizzas, beer and little more, proving that there is something to be said for doing just a few things, but doing them very well. Sometimes they manage to find room to squeeze in a musical act and have even been the site of unexpected open mikes and trad sessions (traditional Irish music jam sessions). For a refreshing treat, order a Haystack hefeweizen with or without the lemon garnish. All ages welcome. Lunch and dinner daily. 8032 Falls Ave. SE; 425.831.2357; fallsbrew.com

TACOMA
Engine House No. 9
The old firehouse on Pine Street was converted into a brewery and pub many years ago, but until recently, it was an unremarkable food and beer destination. In 2011, a change in ownership resuscitated both the restaurant and the brewery, much to the joy of the residents of this up-and-coming Tacoma neighborhood—the Sixth Avenue business district. The menu offers a nice selection of sandwiches, wraps and salads, along with a few entrées, such as steak frites and Famous Fire pasta, with a spicy red chile cream sauce. Be sure to ask if any of its Belgian-style specialty beers are on tap. Kids are welcome. Lunch and dinner daily. 611 N Pine St.; 253.272.3435; ehouse9.com

WOODINVILLE
Redhook Pub
Redhook Brewpub (until recently known as Forecasters Public House) is one of the oldest in the area, having opened its doors in 1994 in Woodinville, and many local beer lovers may have gotten a bit tired of the same old digs, which stood largely unchanged for nearly 20 years. Abandon all you know of the old Forecasters: It recently underwent a massive remodel. The menu still consists of basic pub staples, such as hamburgers and sandwiches, but the space is completely different, now offering a subdued, contemporary atmosphere and no longer feeling hopelessly stuck in the ’90s. Still, the huge patio area remains largely the same and offers a lovely stop for cyclists pedaling between Redmond and Seattle along the nearby Burke-Gilman Trail. While you’re there, be sure to order one of the beers that are only available at the pub, such as the Big Ballard Double IPA. Lunch and dinner daily. 14300 NE 145th St.; 425.483.3232; redhook.com

Read about the local pub chains and the food-cart brew pubs worth visiting now. What’s happening in local beer? Read our full report.